The Israeli government has kept documents detailing systematic racism against Jews from the Middle East and North Africa sealed for 70 years. This week the Knesset rejected a proposal to open the state archives. To correct the historical injustice, the public needs to know the truth. 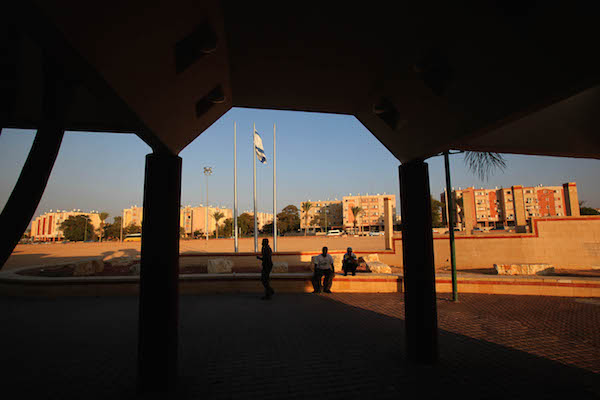 Ofakim, a city in southern Israel, 20 kilometers west of Beersheba. It was founded as a development town on April 19, 1955. (Yossi Zamir/Flash 90)

In nearly every conversation about the arrival and absoprtion of Jewish immigrants from the Middle East and North Africa, the same claim arises—while mistakes were made, it wasn’t because of an explicit policy. If only this claim were true.

The ’50s were difficult years. Israel was a young country, surrounded by enemies and constantly faced with a shortage of resources and manpower. And yet it only takes a glimpse at the records of government meetings from the period to realize how much of a partial explanation this is. Israel’s founders achieved many great things, but they also made decisions that created social and economic inequalities that have lasted for generations. Among these decisions, they created a system of population dispersal known as development towns.

Between 1954 and 1956, Israel built dozens of development towns in the country’s northern and southern geographic peripheries, far from the country’s economic and cultural centers. During that period, 75,000 immigrants arrived from Morocco and Tunisia. They made up 85 percent of the immigrants at the time. Anywhere from 70 to 90 percent of them were sent to development towns, in contrast to the Eastern European immigrants who were allowed to settle in places in the country’s center, in and near Tel Aviv and Jerusalem.

The findings that have emerged from the few files that have been declassified are disturbing. Jewish immigrants from North Africa and the Middle East, who expected to end up in Jerusalem or Tel Aviv, to live in the Holy City or by the beach, were sent to the Negev; when they refused to settle there, Israeli leaders used violence and deceit to force them.

The documents that record these decisions have been sealed for decades, in the hopes of hiding the injustice. Seventy years later, most of the documents are hidden from the public. It is precisely this information blackout that enables the continuation of the problematic policy of population dispersal to this day.

The decisions may have been made 70 years ago, but the wounds they caused never healed. Because the Israeli government never stopped to examine this history, nothing prevented it from committing the same mistakes over and over again.

In the 1990s, Ethiopian immigrants boarded planes expecting, with all the excitement of a people returning to their homeland after 2000 years’ exile, to be taken to Jerusalem. When they landed, they were sent to absorption centers. In many cases, two families were forced to share a single small apartment. Linguistic and bureaucratic barriers prevented them from taking full advantage of the immigration benefits to which they were entitled. Thirty years after their arrival in Israel, their situation remains largely the same: two families in one small apartment. 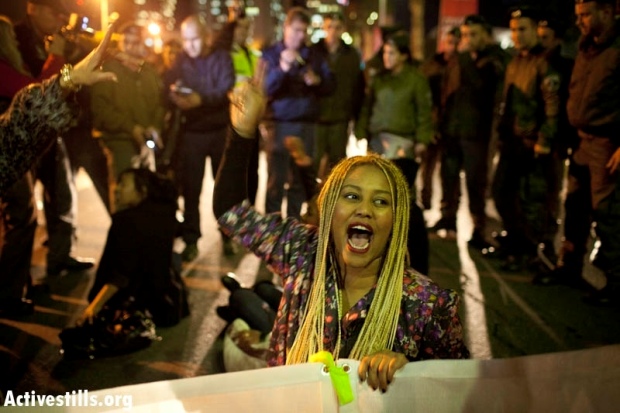 Protester at a demonstration against the discrimination and racism against Ethiopian-Jews in center Tel Aviv, January 31, 2012 (photo: Oren Ziv/ Activestills.org)

The policy of population dispersal was—and remains—a disgrace: from the way new developments are built in the Negev, without considering their effects on existing communities, to the way African refugees arriving at Israel’s southern border were bused directly to the poor Mizrahi neighborhoods of south Tel Aviv. The deep gaps between Israel’s socio-geographic periphery and its center were created knowingly, and on the basis of racist assumptions.

The refusal to recognize this injustice continues to enable the Israeli government to misallocate funds and to deny marginalized populations the resources they require: they are entitled to reparations, to equal opportunity, and to the recognition of the historic injustice that was done to them.

On Thursday, November 23, I asked the Knesset to establish a committee of inquiry on the subject of the government’s policy of population dispersal, from the ’50s until today. Unfortunately, my proposal failed. The only Knesset members who voted for it—who truly see the suffering of the country’s most vulnerable citizens—were my fellow Meretz MKs and two MKs from the Joint List.

The other members of the opposition, members of Yesh Atid and the Zionist Union—those whom I expected to join me in support of the struggle to expose the truth of what happened—disappeared entirely. They left the Knesset floor ahead of the vote, though they had the courtesy to leave behind the smell of fear of voting for a proposal like this. The members of the governing coalition, meanwhile, fell in line to oppose the proposal, even though they say they are correcting the historic failures of the old Labor governments.

The classified documents undoubtedly contain uncomfortable facts, and Israeli society has done all it can to cover up its misdeeds—but this refusal to confront history is precisely what chips away at our country’s moral foundation.

Without bringing to light the classified documents that deal with the government’s policies during the ’50s, ’90s, and 2000s, and without recognition of the injustice done to numerous communities, we will not be able to repair Israeli society. Without a committee of inquiry, we will remain stuck in a cycle of socio-economic inequality that is tearing Israeli society apart from the inside.

Mossi Raz is a member of the Knesset from the Meretz party.