It is tempting to label pro-Palestinian activists as anti-Semitic, because it delegitimizes even their most legitimate claims. But this increasingly common reflex has adverse effects that greatly outweigh its short-term benefit. 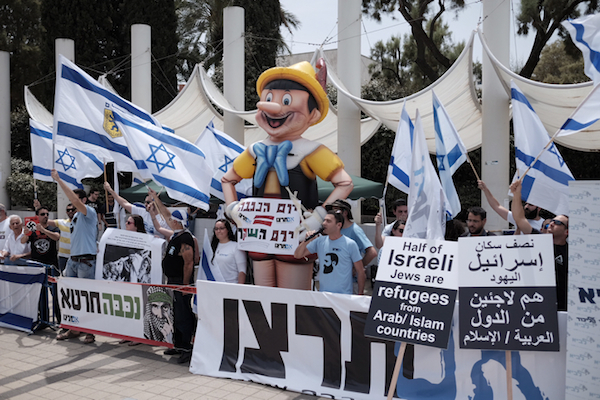 A counter demonstration led by right-wing activists next to a pro-Palestinian rally at Tel Aviv University in May of 2016. (Tomer Neuberg/Flash90)

Things you can see from here, can’t be seen from there, says a famous Israeli song. This is what I feel about pro-Palestinian activism: having been closely involved in pro-Palestine activism as an Israeli student in an American university, I now understand why it is often portrayed in the media as anti-Jewish.

In 2012, the San Francisco-based Arab Cultural and Community Center approached the government of Alameda County, CA, proposing to proclaim June 5 as “Palestinian Cultural Day” in recognition of “the contributions of the local Palestinian population to Alameda County residents and communities.” Focusing on culture, the proposal deliberately avoided any political demands, and focused instead on Palestinians’ “books, poetry, music, dance, oral history, folktales, proverbs, and handicrafts made with cross-stitch embroidery patterns.” In the spirit of inclusion, the Palestinian executive director of the ACCC, Loubna Qutami, made sure it included references to the Palestinians’ “Christian, Jewish or Muslim faith.”

The ACCC’s initiative met with a furious reaction from right-wing Zionist groups. Pamela Geller compared it to an “Auschwitz Proclamation day,” because “the mission of the mystical ‘Palestinian’ narrative is the destruction of the tiny state of Israel so as to satiate the racism and Jewish genocide as commanded by Quran.” A member of StandWithUs insisted that Jews are a separate and distinct national group from Palestinians and should not be confused with them.

Angry protestors showed up at the meeting of the Alameda County Board of Supervisors, to voice their opposition to the inclusion of Jewish faith as a part of Palestinian heritage. In response, the issue was taken off the Board’s agenda.

A few days later, J Weekly, the Bay Area’s only Jewish magazine reported on the incident. The first paragraph briefly conveyed that there was a proposal for a cultural day, and that it had been taken off the board’s agenda. The following paragraph described how “the move produced a flurry of questions and accusations, including the suggestion from pro-Palestinian forces that ‘Jewish pressure’ was behind the decision.” Although the expression “Jewish pressure” was described as an accusation, placed in quotation marks, and attributed to “pro-Palestine forces,” the so-called “quote” was not sourced to any particular individual or organization. In the remainder of the article representatives of the local JCRC and StandWithUs were asked for their reaction to this supposed accusation of “Jewish pressure.” They denied involvement. I later wrote to the editor, and she still could not provide a source for what she had presented as a quote.

And so, a story about a Palestinian who wanted to celebrate her people’s Jewish heritage became a tale of Jewish organizations defending themselves from an inflammatory accusation by faceless “pro-Palestine forces.” The Jewish Telegraphic Agency (JTA) spread the news far and wide. Several weeks later, after the objectionable notion of honoring Palestine’s Jews was eliminated, the Alameda County Board of Supervisors did approve the proposal for recognizing a Palestinian cultural day.

Two years on, in 2014, pro-Palestine students distributed mock eviction orders to all students of two NYU dorms, in order to raise awareness of Israel’s house demolition policy in the West Bank. Although the university has no separate dorms for Jewish students, Laura Adkins, the vice president of the NYU pro-Israel student group TorchPAC, claimed only Jewish students had been targeted. The NYU Vice President for Public Affairs, the University’s Housing Office, and its Jewish chaplain all denied the existence of a Jewish dorm, but the claim was nevertheless picked up by several media outlets, including the New York Post, CBS New York, and The Times of Israel, which reported that Jewish students were served fake eviction notices in order to intimidate them.

The Jewish dorm hoax was repeated again last week in a Knesset discussion of pro-Palestine activism in the U.S. Laura Adkins, who has since become a journalist for the Forward, reported on this discussion, further embellishing her original story. This time the headline screamed “Pro-Palestine Student Group Accused of Compiling List of Jewish Student Dorm Addresses.” The story itself contained no proof of this accusation; instead, Adkins interviewed representatives from the Anti-Defamation League, StandWithUs, and the Zionist Organization of America (ZOA), none of whom provided any information to support these claims. 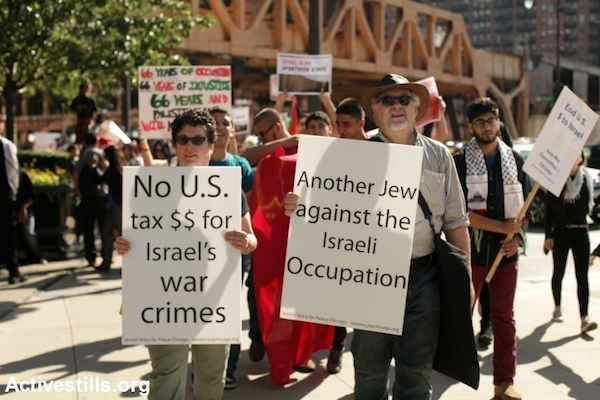 A protest condemning the Israeli assault on Gaza held outside the Israeli consulate in downtown Chicago, 2014. (Tess Scheflan/Activestills.org)

The Forward tweeted this as breaking news, and the item made the rounds among pro-Israel venues, before being taken down by the newspaper, without any explanation, after it was thoroughly debunked in Mondoweiss. Adkins is still serving as reporter for the newspaper, despite her record of fabricating false accusations.

These are far from isolated incidents. Palestine Legal, an advocacy group, has documented hundreds of cases of false accusations of anti-Semitism made on campuses all over the U.S. These include six high-profile investigations of entire universities by the Department of Education, which found nothing.

Why does this keep happening? First, it is important to acknowledge genuine incidents of anti-Jewish sentiment in the pro-Palestine movement, which should be addressed and unequivocally denounced. Interestingly, when such genuine bigotry is called out, this receives almost no attention in the mainstream press.

But in addition to these genuine examples of bigotry, there is clearly an incentive to “anti-Semitize” pro-Palestine activists. Readers click on sensational stories about Jewish students being hunted down in their dorms, which increases the traffic on news sites; organizations competing for contributions from wealthy, conservative donors need to present themselves as valiantly battling heinous anti-Semitism; and while the free speech of pro-Palestine activists, as annoying as it may be, cannot be quashed directly, it is easier to do so after labeling it as hate speech. In addition, many newspaper editors have little acquaintance with such activists, and it isn’t hard to convince them that “Muslim” students behaved or spoke like terrorists.

Anti-Semitizing comes at a serious price: it derails any serious conversation on Israel/Palestine, since opponents of the status quo can easily be dismissed as potential terrorists. It can escalate to death threats, like the ones Muslim activists in Florida received after similar accusations of targeting students in non-existent Jewish dorms. Finally, it de-sensitizes people to genuine anti-Semitism, and it keeps much of the Jewish American community in a permanent sense of panic, as if a new Holocaust is imminent and the new Nazis are collecting names of Jewish students before they round them up.

This isn’t true. Jewish Press, you can do better.