It is naive for the Israeli peace camp to think that deposing Netanyahu will bring about peace or even get us closer.

Now that early elections are almost certainly going to be held on March 17, rumors have begun spreading like wildfire about the myriad possibilities of parties teaming up and the various frontrunners who will be vying to dethrone Prime Minister Netanyahu. There are many pieces in the puzzle, and it is hard to keep up or know how things will actually pan out. But one thing is already clear: the most popular theme of this election is the “Anyone but Bibi” slogan. 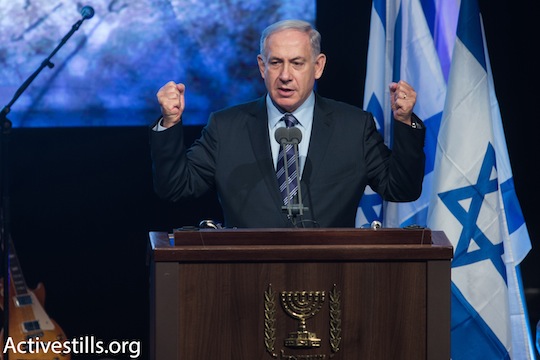 Will anyone be able to dethrone Netanyahu? (photo: Activestills.org)

Over the weekend, Tzipi Livni (Hatnua) and opposition leader Isaac “Buji” Herzog (Labor) held talks about forming a united “center-left” list in which Herzog will be number 1 and Livni number 2. There are rumors that former Defense Minister Shaul Mofaz from Kadima may also join. Internal polls show that such a list could garner 24 Knesset seats, beating Likud’s projected 22. Their only vision for the country at this point appears to be “Just not Bibi.”

Herzog and Livni both declared in recent days that they are ripe to be Israel’s next prime minister. Speaking at the Saban Forum in Washington, D.C., Herzog explicitly promised to head the next Israeli government, and announced he would be willing to form a coalition of parties spanning “Liberman to Meretz.”

With those three words, Herzog excluded the possibility of governing in cooperation with any Arab parties and revealed he has no political vision, since as far as Jewish parties go, Yisrael Beiteinu and Meretz represent opposite ends of the spectrum.

And Livni, the same Livni who has consistently marketed herself as the “peace” candidate (or more accurately the “peace process” candidate) even as she sat in successive governments that led the country into murderous, destructive and ineffective wars, and who nevertheless chose to sit in the current coalition with Netanyahu – this Livni is now trying to run as an alternative to Netanyahu? 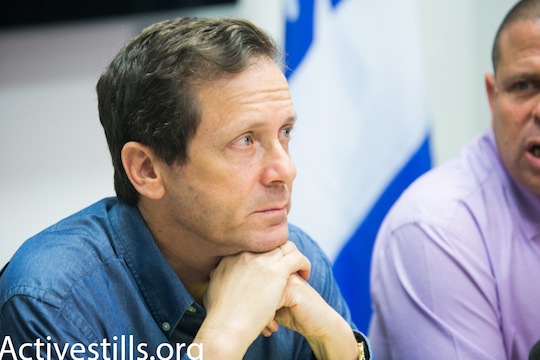 Meanwhile Naftali Bennett, who heads the Jewish Home party, has his heart set on being the next defense minister, so he is strengthening his ties to Netanyahu and placing his bets on another Netanyahu-led Likud win. Liberman has been strangely quiet. Gideon Sa’ar, the former interior minister who resigned from political life in mid-September is now reportedly trying to defeat Netanyahu in Likud primaries scheduled for next month. There’s a man whose word you can trust.

Moreover there are still rumors that Netanyahu is securing a partnership with the ultra-Orthodox parties and may even try to avoid elections at the last minute – which would mean by Monday, when the final vote on dissolving the Knesset takes place.

Former Likud minister Moshe Kahlon is the wild card in this election who may be the surprise big winner with the new, yet-unnamed party he is now forming. As communications minister in the previous Netanyahu government, he introduced competition into the cellular phone market and is now known and liked for having reduced every Israeli citizen’s monthly phone bills. Although he is a firm right-winger (he got his start in politics working for Uzi Landau, one of the more hawkish Likud members who is now with Yisrael Beiteinu), it is not clear whether he will team up with parties to the right or to the left of him. Either way, he will be pushing himself as the anti-monopoly candidate who cares about the interests of the working class. 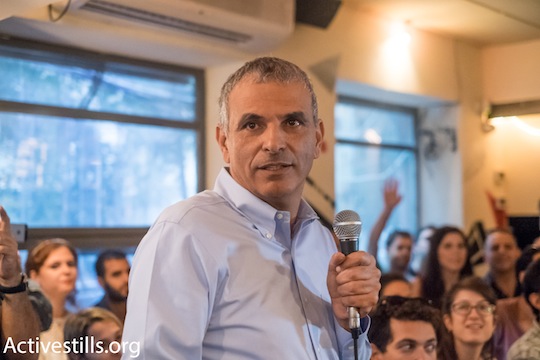 Moshe Kahlon, the wild card in the upcoming election, will likely push a working-class agenda. (Activestills.org)

One of the interesting and promising developments of this election cycle is the possibility of a united Arab list. The various Arab parties met last week to discuss forming a united bloc for the election, primarily because the new election threshold of 3.25 percent (100,000 votes) will be nearly impossible to reach if they each go it alone. Hadash, the Jewish-Arab party that is consistently popular among the non-Zionist Israeli left has already said it would not join such a list since it is not strictly an Arab party.

Two polls conducted in the last week shows that 65 percent of Israelis do not want Netanyahu to be prime minister again, while 30 percent still maintain they do. Either way, many on the center and the center-left are waving the “anyone but Netanyahu” flag. Peace Now Director Yariv Oppenheimer, for example, said as much on his Facebook page.

But that very mantra could just as easily lead to a government that is more explicitly to the right of Netanyahu, or centrist parties whose policies are essentially not that different from those of Netanyahu. They may push less settlement construction and less friction with the U.S. and EU, but would continue the status quo of occupation, hyper-capitalism and exclusion of Arabs. A Labor-Livni style coalition is likely even worse than an explicitly right-wing one, as it would be a center-right government in center-left clothing.

As my colleague Orly Noy wrote on her Facebook page the other day, after Meretz Party leader Zehava Gal-On made it clear the party would never sit in a coalition with Netanyahu (paraphrasing): “That’s great and all, but I prefer to vote for a party whose leader doesn’t feel the need to make such proclamations, since sitting in a coalition with Bibi shouldn’t even be a consideration to begin with.” This sums up the problem with the “Anyone but Bibi” campaign.

Besides, it gives Netanyahu way too much credit. For most of the last five years, Netanyahu’s rule has been characterized by doing nothing except keeping the wheels of the status quo in motion. It is naive for the Israeli peace camp to think that deposing Netanyahu will bring about peace or even get us closer.

This whole election cycle creates an illusion of optimism – a chance for a real transformation – while ignoring all the issues that require serious changes: human rights, equal rights, freedom of speech and protest, and Arab-Jewish partnership. None of these, of course, can be properly addressed without ending the infrastructure of occupation.

More on the upcoming elections:
Israel’s elections: A referendum on Netanyahu
Can Kahlon be the next prime minister of Israel?