The United Nations today confirmed “multiple dead and injured” at its shelter in Beit Hanoun, where Gazan families had sought refuge from non-stop Israeli shelling that has killed more than 700 Palestinians, most of them civilians.

Chris Gunness, a spokesperson for the UN Relief and Works Agency (UNRWA) for Palestine refugees, said via Twitter that the agency had earlier today passed the shelter’s “precise coordinates” to the Israeli military. Fearing an attack, UNRWA had “tried to coordinate with the Israeli army a window for civilians to leave,” but “it was never granted,” said Gunness.

As reported by AP, the attack comes just hours after UNRWA announced more than 140,000 Palestinians had sought shelter at its facilities from the ongoing Israeli bombardment. That number, based on headcounts at 83 UNRWA facilities, does not include Palestinians forced to seek shelter elsewhere, including on the grounds of Gaza’s Al-Shifa Hospital. UNRWA also reports that one Palestinian child has been killed in Gaza every hour for the past two days.

With the percentage of displaced likely approaching 10 percent of Gaza’s population – this in a territory where refugees are already the majority – humanitarian workers are calling the impact of “Operation Protective Edge” unprecedented. Raji Sourani, director of the Palestinian Center for Human Rights, told +972 that Israel’s “Operation Cast Lead,” which was launched in December 2008 and caused the deaths of more than 1,400 Palestinians, was “a joke compared to this,” referring to the now 18-day Israeli assault by air, sea, and land. 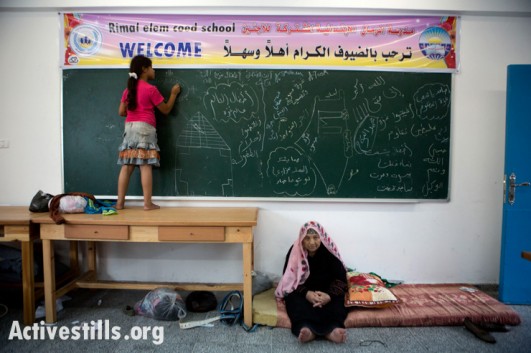 A Palestinian girl from the Al-Tom family draws on a chalk board at UNRWA’s Remal Elementary School in Gaza City which is used as a temporary shelter for Palestinians fleeing the northern Gaza Strip, July 13, 2014. (photo: ActiveStills)

As news of the Beit Hanoun attack broke, Israel showed no sign of scaling back its ground invasion or airstrikes. Israeli Defense Minister Moshe Ya’alon said yesterday that Israeli troops are “preparing for the next stages of battle once the tunnels have been taken care of.”

As the Palestinian death toll continues to rise, calls for a ceasefire are mounting, with U.S. Secretary of State John Kerry signaling this morning that “some progress” toward the goal had been made. Meanwhile, the U.S. yesterday was the only member of the UN’s Human Rights Council to vote against a war crimes inquiry into Israel’s actions in Gaza, which council head Navi Pillay said indicate a “strong possibility” that Israel has fallen afoul of international humanitarian law. Pillay cited attacks on civilian homes and hospitals, which have so far killed dozens of children.

Although the identities of the dead in Beit Hanoun have yet to be confirmed, with more than 40 percent of Gaza’s population under the age of 15, thousands of children are hunkered down in the UN shelters.

Today’s attack comes as Israel’s outgoing president, Shimon Peres, formally hands over his post to Reuven Rivlin. Peres oversaw Israel’s “Operation Grapes of Wrath,” the 1996 military campaign over Lebanon, which included the bombing of a UN civilian shelter in Qana. The Qana Massacre, as it came to be known, left 106 dead and prompted UN investigators to conclude that it was “unlikely” Israel had acted in error.