+972 speaks with Gisha’s executive director Sari Bashi about changing the Israeli policy of restricting Palestinian freedom of movement, one legal victory at a time, and transforming Israeli public perceptions of Palestinians in Gaza. 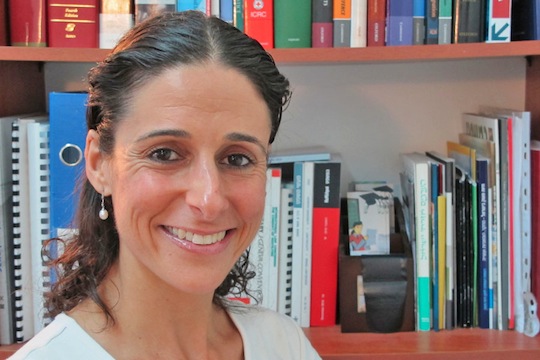 Behind her desk in her Tel Aviv office, Sari Bashi has two things hanging on her wall. On the left is a small, framed memento from her staff that includes a photo of her running, a map outlining the ultra-marathon she completed last year, setting a record for running the longest distance – 215 kilometers (134 miles) – of any Israeli woman, and a breakdown of her run times. On the right is a large map of the Gaza Strip that pinpoints border crossings between the Gaza Strip, Egypt and Israel.

There’s a strong connection between her work and her running, the absolute love for freedom of movement, Bashi explains.

As the founder and executive director of Gisha, Bashi, 37, has worked to promote freedom of movement for Palestinians, especially those living in Gaza, since 2005.

Like running, she says, you must have patience, humility and determination to do human rights work.

How does a woman from New Jersey end up founding an Israeli NGO with a mission to help Palestinians?

I grew up back and forth between Israel and the U.S. I came here after university and started working as a journalist. As a reporter, I saw human rights violations that I wanted an opportunity not just to report on, but also to take a stand on as an advocate. So I studied law in the States and then I came back here and clerked at the [Israeli] Supreme Court.

It gave me an opportunity to see how the Israeli legal system addresses claims by Palestinians, which was a really good background for founding Gisha. We started as an organization that provides legal assistance on freedom of movement to Palestinians from Gaza, but because I knew from the court how limited the legal system could be we also developed public advocacy tools, which we use in combination with legal advocacy.

What are some of the specific challenges of promoting human rights for Gazans?

The biggest challenge is lack of accountability. Within Israeli public discourse and institutional behavior, there’s a belief that Israel owes no obligations to people living in Gaza, that they are foreigners vis-a-vis the West Bank vis-a-vis Israel, and therefore have no right to travel. Of course Gaza and the West Bank are recognized as a single territorial unit [under the Oslo Accords]. Families are separated between those two areas. There are institutional, cultural, economic ties that were encouraged and created by Israel and so to cut them off and say students from Gaza can’t study in the West Bank, mothers from Gaza cannot travel to see their children in the West Bank, that’s a very difficult barrier to overcome and that’s what we’re working on.

What is the biggest misconception about Palestinians’ ability to move freely?

That allowing that travel is dangerous. Most people think that if the army says no to a request it’s because that person is dangerous or it would some how threaten Israeli security. The reality is that travel restrictions are based on a policy that has both security and political goals. There are specific individuals that the army makes security claims against but most of the people blocked are not allowed to travel because of what Israel calls the separation policy, which is a political policy to separate Gaza from the West Bank. One of the reasons why we’re able to be successful in the public arena is we have a good argument. This is not about security. And if it’s not about security, then people’s human rights should certainly be respected.

What motivates me day-to-day are the individual successes, to be able to look at one person and say, this person’s life is different because of what we did. That feels wonderful because you know that even if you’re not winning every one of the larger battles, you’re making a real difference in somebody’s life.

More broadly, I look at the effect we’ve had on the dialogue regarding Gaza and the way we’ve managed to change somewhat the way people in Israel, and also in the U.S., think about people in Gaza. We don’t want to be in a position where we have to fight for every person to travel back and forth. We want to be in a position where the policies are such that the right to freedom of movement is respected.

There are international interventions all the time. It’s an internationalized conflict in which superpowers use the parties as proxies for their own political goals and that’s part of the reason why it’s lasted for so long. Because at the end of the day, it’s a territorial dispute and it possibly could be resolved more quickly if the rest of the world would just leave us alone. But they’re not going to do that anytime soon.   So should the intervention that already takes place, politically, financially, militarily, be targeted toward respecting human rights? Absolutely. Should the various powers that are brokering the conflict and the negotiations, or lack thereof, be insisting on respect for human rights as a critical part on the behavior of both parties? Yes.

Do you ever wonder if your work legitimizes the occupation or blockade of Gaza by working for change from the inside?

People who want the occupation to end and for human rights to be respected want Israelis to do something different than what they’re doing right now. It’s very important that there’s outside pressure but at the end of the day we need to make sure that Israelis are changing their behavior. An Israeli organization is uniquely positioned to be able to make that happen, in coalition with international actors, certainly together with our Palestinian partners, whose work is probably the most important, but whose position is much more vulnerable than ours.

As an Israeli organization, we also have access to information and legal proceedings that can be very useful. One of the most important things we do is provide information about the nature of the restrictions on freedom of movement through freedom of information litigation. That information allows others to ask questions about policy.

What has been your organization’s greatest accomplishment?

In each case it was an individual victory that had much broader implications on policy. For example, the U.S. government was withdrawing Fulbright scholarships to students from Gaza because Israel wouldn’t let them reach their studies abroad in the States. We made that known through a front-page article in The New York Times that made it to former Secretary of State Condoleezza Rice within three hours. She said that Palestinian young people should be given a horizon for their dreams, and that was the first time, since the Hamas takeover of Gaza [in 2007], that an American official had spoken about the people of Gaza and their rights and aspirations. That I think did a lot, not just for those individual students, but also towards changing the consensus that people in Gaza should be restricted and punished because of the Hamas regime.

When people that we care about have been subject to restrictions from the Hamas authorities inside Gaza. Because that’s something where we have no ability to be helpful and we’re reliant on wonderful colleagues from Palestinian human rights organizations who are doing that work, but when that happens I feel like a client and not a lawyer.

It makes me understand the importance of advocacy and it fills me with admiration for my Palestinian colleagues who are doing much harder work than we’re doing because their position vis-a-vis the authorities is much less secure than ours.

What do you hope Gisha will accomplish next?

We have a number of goals and projects to try to close the gap between the statement that people should be allowed to engage in normal life in Gaza and the reality, which is that people are very much restricted.

We’re trying to expand access for businesswomen, civil society organizations, students, merchants, seeking not just to receive goods, but also to sell goods, and therefore to allow the Gaza economy to recover. And certainly family ties. We have a number of plans towards changing that policy using legal and public means.

Do you run on a regular basis?

Most days I run. I’m an ultra-marathoner, meaning that I run distances so far of up to 134 miles. There’s a very strong connection for me between my work and my running. One is the absolute love for freedom of movement. I love the feeling of moving my body through space, just putting on a pair of shoes and going anywhere I want, crossing through town boundaries, forests, cities and being able to travel as far as my water and food supply will allow me to go. And I’m conscious that there are people in Gaza for whom that is not a possibility and I identify with them and I embrace the goal of trying to remove restrictions to their freedom of movement.

I also learn a lot from the challenge of long-distance running. You prepare for a 134-mile race. It seems absolutely overwhelming. So it turns out that even overwhelming challenges can be overcome if you have patience, humility and determination.

I need to pace myself and not let ego push me too fast in the beginning but at the end, when I’m starting to slow down, use my determination to push me faster than maybe my legs want to carry me. And it turns out that when you’re trying to protect human rights in the context of the Israeli occupation, the same wisdom applies.