Thousands of Palestinians flock to Bethlehem, Ramallah and Jerusalem for the 1001 Laughs comedy festival where serious topics such as identity, stereotypes and the difficulty of air travel turned into comedy gold. 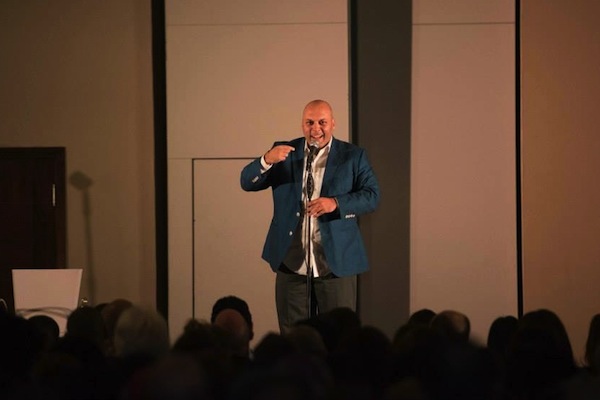 On Friday afternoon Mo Amer stood under two looming globe-shaped light fixtures pouring heat over a makeshift stage at a Bethlehem hotel. The white-sleeved chairs in the modest ballroom were all taken and people stood in the back. Air from mobile units reached no one. With a few comic complaints and melodramatic forehead wiping, Mo plowed on, leaning in to say: “we Arabs, we don’t need doctors. We self-diagnose. If we are sick? It is nothing! It’s just because of lafhet hawa [catching a draft – ds]! And the cure for everything – olive oil!” Ripples of laughter ensued; a lean older man with missing incisors bobbed and grinned and said: “Aywa!”

Mo – short for Mohammed – was one of seven Arab-American comedians performing short skits in an English, or rather Arabish, comedy festival called “1001 Laughs.” Sponsored by the Movenpick Hotel in Ramallah and American Consulate General, the show ran this past week in Ramallah, East Jerusalem and Bethlehem. The producer, opening act, and MC Amer Zahr is well-known to +972 Magazine. He has committed the rare act of spinning his Palestinian diaspora life story, Arab and mixed-religion culture into the stuff of self-deprecatory humor that turns anger on its head, even while legitimizing its causes.

Audiences seemed thirsty for comic relief. Although mainly in English, all shows were sold out, Zahr told +972 Magazine, while explaining that some local artists joined the shows earlier in the week. He said that over 1,800 people attended in total, and that the Bethlehem event was added at the last minute for free – “but…we still consider it sold out!” said Zahr onstage to giggles. The group was surprised: “We worried we wouldn’t get large enough audiences, but people were sitting in the stairs,” Zahr said. He attributes the enthusiasm to the fact that “Palestinians love to laugh, and we know how to turn crazy and sad situations into things that make us laugh.”

Those situations translated into a few core themes that arose throughout the routines, reflecting the maddening frustrations of life that are the basis for good jokes: hardship as an Arab or Muslim American; trouble with air travel; explaining names and identity, typecasting as terrorists.

Ramy Youssef, a slim, baseball-capped Egyptian-American hipster, riffed on having a similar name to one of the 9/11 suicide bombers, and Mike Easmeil explained how “Mike” emerged when nobody in the south where he grew up could grasp “Mahmoud.” “MacWhat?” he hammed in a gulping drawl.

Zahr joked about the “VIP” lounge where Arabs are commonly sent upon landing in Tel Aviv, and Ahmed Ahmed (of “Axis of Evil” and “Zohan” fame) recalled the “brown room,” in U.S. airports. 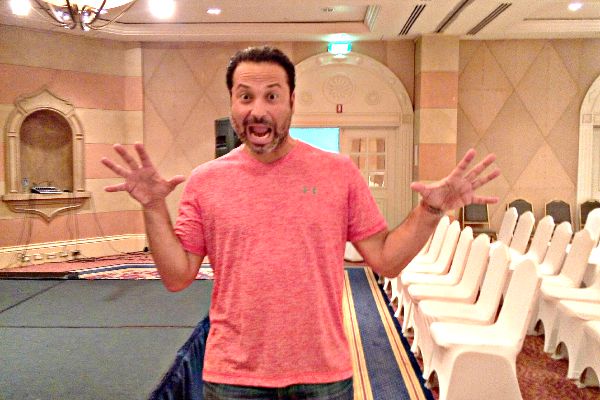 Still, the more delighted and spontaneous bursts of laughter were reserved for the quirks and oddities of being Palestinian, Arab, Muslim or Christians, or Middle Eastern. “We Arabs,” said Zahr in his opening skit, “we have this thing – we think that whatever you’re doing, I can do it better.” He recounted the inevitable unsolicited advice fans give him to improve his skits. The audience clearly saw itself here – as in other portions, laughter of assent, clapping and nodding of mostly bare heads – just a few hijabs – broke out.

Others talked of relentless wedding culture (“I’ve been here for five days, and attended 96 weddings!”); the fearsome, slipper-throwing wrath of Arab moms; overeating, and – in a tribute to the longing of diaspora Arabs for local flavor – the demand to lug large amounts of customs-suspicious cooking ingredients back to the U.S. This is a notable and perhaps symbolic contrast to Israelis, who traditionally beg travelers to drag American products back to the region.

The great elephant of politics and the occupation got a fairly bit part. Although a number of the comedians were Palestinian, they had all had grown up or live in major American cities, including Chicago, LA, Houston. Zahr told some long-standing jokes about how, as a kid at Christmas time, he asked Santa for implementation of Resolution 242 and 194. Mona Aburmishan, the sole woman in the gang, skewered less tasteful Palestinian male pick-up lines: “You be the Palestinian and I will be the Israeli: I want to occupy your body.” She wore a neckpiece that recalled Palestinian embroidery, draped over a defiant cleavage. But her routine spent more time on body image and catty comments of family and friends than politics. 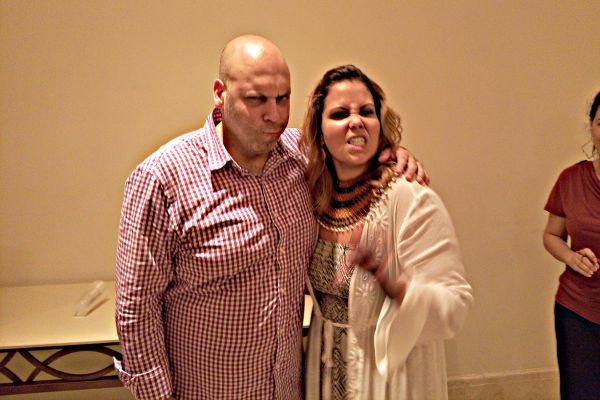 Indeed, the requisite jokes about marriage, dating and singledom, poking fun at other ethnic groups – blacks, hispanics, white Americans, Filipinos, and Jews (no more, no less than the others – perhaps just a little less) – and even marijuana legalization (met with some polite confusion) made the program feel like comedy anywhere. People generally seem to like jokes about private lives, subcultures, taboos.

Given that Israelis almost invariably see Palestinians as aggressors (from the right), or victims (from the left), the sight of folks simply gathering to laugh at themselves is unusual here. Laughing together with people generates an irresistible bonding sensation. It is tempting to wonder how Israelis, Jews or Arabs, would respond to the experience. Zahr said that the group currently has no plans to perform in Israel, but they would be fully prepared to do so. Does he think they could offer or contribute something to Israeli Jewish society? “I wish [Israeli Jews] would come,” he said, between hugs and photographs with gushing fans, “so that they would learn more about who Palestinians are, and how Palestinians think.”