University students from Tira are proving they can be a force for change in the Palestinian community in Israel. The key: taking the fate of their hometown’s youth into their own hands. 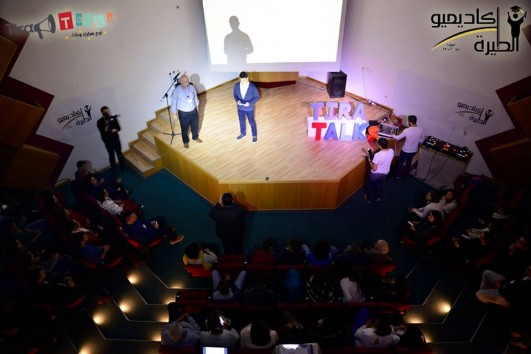 Three weeks ago, the building of the municipality of Tira, a Palestinian Arab town in the Muthalath (“Triangle”) area of Israel, was bustling with over two hundred people gathering in its auditorium.

Five speakers took the stage and delivered captivating talks on five different topics, all of which were nothing short of inspiring. Fadi Matar, the 24-year-old founder of the organization behind the event, described the process of making it happen in a community not used to such initiatives. A professor and scientist then spoke about how his own experience could be an example for youths to build a successful and fulfilling career. An activist made the case for why youths should visit Palestinian villages destroyed and depopulated during the Nakba. A fashion designer showcased how to create modern women’s clothing out of their grandmothers’ traditional Palestinian gowns. And a man told the story of how he channeled difficult moments in his life into a passion for Arabic calligraphy.

The “Tira Talks” were organized by the Academiyu al-Tira (“the students/educated of Tira”), a local collective of Arab university and college students from the town. Inspired by the TED talks format, the Academiyu initiated the event as a creative way to invigorate new social interests and ideas among the town’s residents.

“We wanted to give members of our community a stage to speak about their lives, experiences, and special pursuits,” said one of the organizers. “We want our town to know the diverse kinds of people we have in our midst.”

Tira, a largely conservative Muslim town, has for years garnered a negative image among both Arab and Jewish citizens of Israel as a place of crime, reckless driving, and gun violence – problems that indeed affect the town to this day. However, local initiatives like the Academiyu are showing that there is much more to the town than these stereotypes, with many even seeing their work as playing an important role in countering Tira’s social troubles.

+972 Magazine spoke with two members of the Academiyu: Mais Jondia, 21, an accounting student at Tel Aviv University; and Aseel Bishara, 21, a medical student at Ben-Gurion University. The two spoke about the beginnings and purpose of the collective and its engagement with the community in Tira. But they also spoke about the challenges they faced in starting their movement in the town, both as activists and as young women in a conservative society. 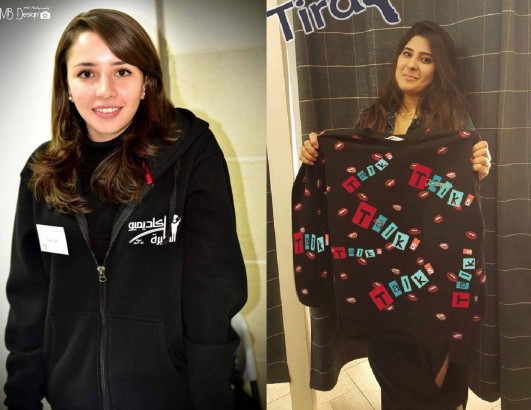 The Academiyu is a local youth collective that was started two years ago by a group of university students from Tira, who wanted to create a new outlet for community engagement in our hometown. When we first met, we did not have any concrete ideas for what we could do; but within a few months, we began creating whole projects and activities that we would run throughout the year.

There are currently 82 Members of the Academiyu, who are involved in the decision-making process and can vote; and 190 “Friends” of the Academiyu, who do not vote on decisions but assist our activities whenever they can. We are proud to say that more than half of both our Members and Friends are women. All of them come from a wide range of backgrounds and educations – political science, medicine, art, architecture, music, and more – which are valuable for what we learn from each other and for their contributions to our activities. 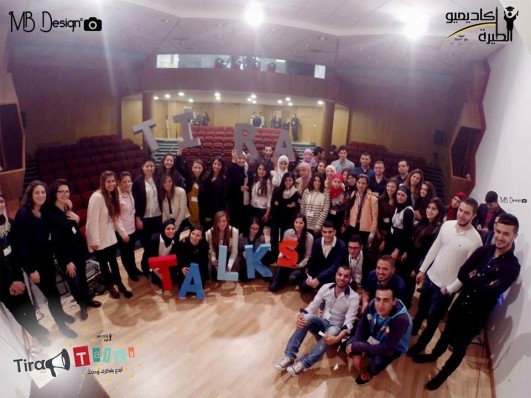 Why was the Academiyu created?

The idea for the group was born out of two main things: our confrontations with Israeli society, and our experiences in the Arabic education system.

Our generation of Arab students, like the previous generations, has grown up living and learning next to the Israeli-Jewish community. We have had to deal with many problems with this society, both because of our different cultures and because of the pressures we face as a discriminated minority in the country. This environment created the feeling that we as Arab youths have to reclaim the power to change things for our generation, in order to transform our community’s experience. 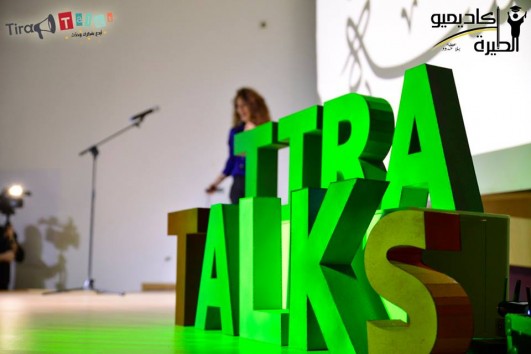 The ‘Tira Talks’ logo on the stage of the auditorium of the Tira municipality building, 4 December 2015. (Photo courtesy of the Academiyu al-Tira).

We looked back at our personal experiences to identify some of the sources of these problems, and we found that our high school years were a critical stage for influencing these issues. When we were in high school, we did not know what we wanted to do in the future, or what we wanted to learn in university. We never received much help from our school counselors, whose advices were feeble and outdated. So we were usually left to fend for ourselves without proper guidance or assistance.

We therefore realized that, in order to reduce the educational gaps for the Arab youth, we had to target the students in the high schools. Now with the Academiyu, we hope to put our town’s youth at a better starting point in their personal and educational lives than the earlier generations.

What programs and activities does the Academiyu do, besides the Tira Talks?

Our first and main program is with two of Tira’s high schools, with which we organize a biannual “academic day” in which university students talk to the high school students about their various fields of study, the different universities and colleges, career opportunities, and so on. We start with a lecture about higher education in general; then we divide the students into smaller, more focused groups of five to six people, in which they talk about themselves, their interests, and their ideas for the future; and then we have an open fair to share information on different academic studies. Other activities we do for high school students include tutoring for the matriculation exams, and organizing day trips to universities in the country. 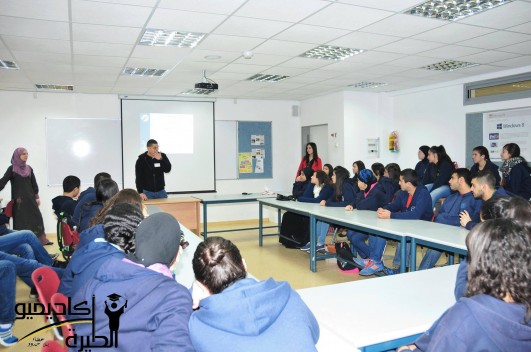 Our second main program is called “Kitabi Kitabak” (“my book is your book”). During the summer holidays, we collect all kinds of books that people would like to donate, and then invite the public to come and take any of the books for free. The first year we tried this was tricky, as people were not used to exchanging books this way; but by the following year, the people were more familiar and excited about it. We now have a sticker that we give to people who participated, as a way to encourage pride in the project.

Other programs we have include: “Khutwa Ula” (“the first step”), in which first-year Arab university students are assigned an older student to help them transition into university life; and a program called “Students of today, leaders of tomorrow,” where we have children in the 5th and 6th grades participate in a competition to design a volunteer project that they will carry out through their schools. It’s wonderful to watch 12 and 13 year old kids in that program, young as they are, think about what they want to do for others in their community.

Along with other smaller activities, we are also active on our Facebook page, through which we post not only about the work of the Academiyu, but also more generally about local events, activities, news, and public campaigns (such as against drug use) in Tira and the Palestinian community. 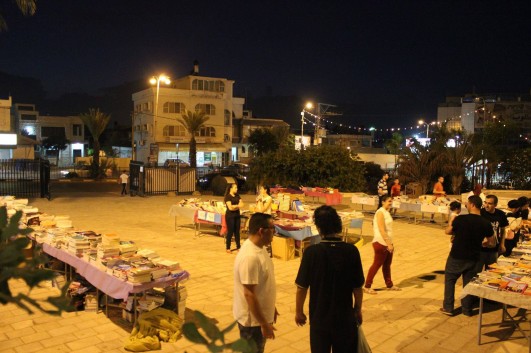 What challenges have you faced with your social activism?

The violence in Tira is one of the biggest problems. A few years ago, we both used to be the only female members of the Darna Association (a movement for youth empowerment), and we would take part in demonstrations to draw attention to violence in the community, and to encourage young people to express their thoughts about the issue. It was not easy. We had frequent confrontations with some people from the community, even threats.

When we talked with our families and friends about the problems in Tira’s society, they were antagonistic from the very beginning. They would say “Why are you doing this? Focus on your studies instead.” They believed there was no hope or point in trying to bring change to the town. Some would even say “What man will look at you (as a future wife) when he knows that you are doing these things?”

Our parents’ generation is very different. They didn’t want us to be part of groups where there were more boys than girls. Our fathers would go to the mosque to hear religious sermons, then come to us and ask why we are involved with the Academiyu. We had to fight hard to break down these doors. But in the end our key to success was in not letting these opinions affect us. The violence and inequality within our society will never be solved if we do not fight to change the minds of the younger generations. 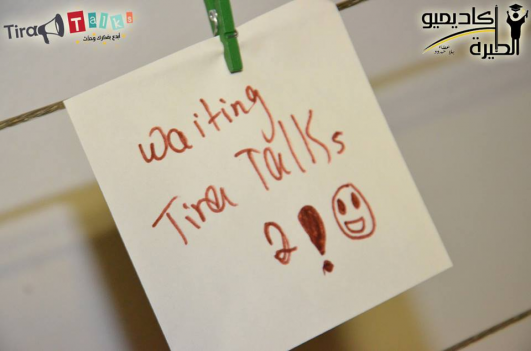 A posted note with an audience member’s feedback on the Tira Talks event held on 4 December 2015. (Photo courtesy of the Academiyu al-Tira).

Are you seeing a positive impact from the Academiyu’s work?

Definitely. Through our activities, we are empowering the individuals we interact with, and the environment in which we live. It is not just a place for us to meet new people and talk about our problems. It is a place for students to give back to the place where we came from.

In two years, we have grown from a small group of students to an organization of nearly 300 people. We are seeing a new enthusiasm for volunteering from youths in Tira, with more and more students outside the collective asking to join as Members or Friends. With the Academiyu’s success, our parents also aren’t questioning our social activism or our involvement in the collective anymore; now they are actually encouraging us and others to keep going.

The model of the Academiyu has also become popular. People from other Arab towns are now asking us how to carry out programs like the Tira Talks and Kitabi Kitabak, with some wanting to start their own groups too. We see this as a good kind of competition, to encourage others to do what they can for their communities. We now have connections with groups in Kufr Bara and Umm el-Fahm, and we are now trying to develop larger projects for the whole Triangle area.

So overall, we can see that the Academiyu is becoming something special. At the entrance to the Tira Talks, we were giving out name tags to all the participants, and we saw so many different people – young and old, students and teachers, residents of Tira and visitors from other towns. This response gives us the confidence to believe that we can have an effect not only on our own hometown, but on the wider Palestinian community in Israel as well.