Pro-Israel journalists and politicians in Germany target a Palestinian arts and culture festival, its curators and the venue hosting it. 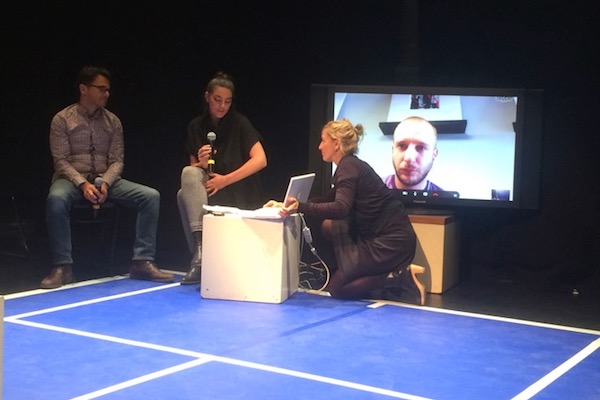 A celebration of Palestinian arts and culture in the city of Berlin has sent a few German journalists and local politicians over the edge. “After the Last Sky,” a first-of-its-kind interdisciplinary and international festival of contemporary Palestinian artists. Over the course of September and October, the festival sought to “transgress the boundaries of Palestinian life and identity,” and to do so through theater, cinema, performance, literature, spoken word, music, dance, visual art, panel discussions, and more.

In a particularly vile article in the Tagesspiegel daily newspaper, journalist Johannes Bockenheimer accused the Palestinian and Jewish presenters of incitement, that is, being too critical of Israel. Showing no interest in the artistic program, his article attacks the curator Anna-Esther Younes and other organizers and presenters personally, for what he assumes to be their “proximity” to non-violent struggles for Palestinian rights.

Furthermore, Bockenheimer accused the Berlin Senate of supporting “anti-Israeli” activities, in an attempt to compromise the festival and its venue’s funding. Repeatedly referring to Israel as “Judenstaat,” the Jewish state, he equates Israel with Jews and manipulates any critique of Israel to appear essentially anti-Jewish.

Accusations of anti-Semitism are familiar to every person in Germany who is supportive of Palestinian rights. Being Jewish doesn’t help much, and in fully absurd situations, Jews like me are accused of anti-Semitism by Germans if we are not patriotic enough for their taste.

In the same spirit, Klaus Lederer, the head of the Left Party in Berlin, claimed that using terms like apartheid and colonialism should disqualify cultural events from public funding. He argued that such negative depictions of Israel would feed anti-Semitism.

People like Bockenheimer and Lederer don’t like words like apartheid and colonialism. I don’t like them either. People living under the weight of their violence every day, like them even less. We use these words because we believe they describe the harsh reality in Palestine/Israel most accurately.

Clearly, this is not just about money, but about legitimacy and power. The threat to withdraw cultural funding is a threat to strip people of the power to describe their past and present, to attribute meaning to it, and to explore it by artistic means. Nonetheless, the sovereignty to define Palestinian past, present, and future belongs to the Palestinians. It does not belong to German politicians and journalists, and cannot be held hostage by their “issues” with us, namely the Jews.

These men are not isolated examples; they represent a very real segment of German society. It is tragic that some Germans’ self-described “love affair” with Israel translates into a need to silence, delegitimize and erase Palestinian narratives and identities. That type of twisted logic locks Jews and Palestinians in an eternal zero-sum game, advancing nothing but oppression, violence and injustice in the Middle East.

The curators of “After the Last Sky” understand the depth of this problem all too well, asking in their opening statement: What can we understand about our universal human condition through the example of Palestine and Palestinian narratives? 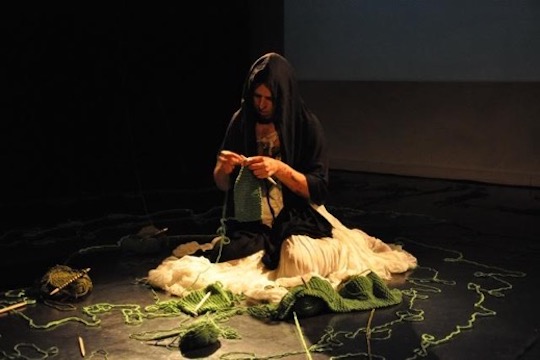 A performance by Raafat Hatab at the ‘After the Last Sky’ festival in Berlin. (Wagner Carvalho)

They identify the destructive logics and racist fantasies underlying the anti-Muslim racism in Europe:

the figure of the Palestinian became a vessel for several racist fantasies about the Other: the stateless sponger, the criminal foreigner, the potential terrorist, the sexist Arab, the homophobic hyper-masculine Oriental, the eternal Anti-Semite.” These modes of representation, they recognize, exceed the Palestinian experience. “Indeed, this racist image potentially includes everybody who is mis-/recognized as “Arab”, “Muslim”, or even every other subject that is in solidarity with Palestinians due to similar experiences or opinions. [opening statement]

Through its diversity of contents and voices (see full program here, and the art exhibitions), the festival has offered a critical engagement and transgression of these modes of representation, towards emancipatory visions of the future. It presents visions co-created by an array of artists across identities, encompassing Palestinians, black people and people of color, Jews, and many others.

That a representative of the German Left would support the anti-democratic, right-wing infringement on the free expression in this festival will likely come as no surprise to anyone even distantly familiar with the public discourse in Germany. Whereas everywhere in the world social movements and the Left align in solidarity with the Palestinian struggle for decolonization and liberation, Germany is the stubborn exception.

Here, automatic support for Israel is a simple and convenient way to deal with the Nazi past. No need to interrogate your family history. No need to draw universal lessons. No need to resist modern forms of racism in one’s own society. Keep calm and support Israel. Even if this means sending subsidized nuclear submarines, and supporting a half-century military occupation and wars that kill thousands of Palestinians and dozens of Israelis.

Israeli Minister of Culture Miri Regev recently made headlines by attempting to withdraw funding from cultural activities and institutions she deems to be insufficiently nationalistic and patriotic. This correlates well with her earlier career as the Israeli army’s chief military censor. According to her worldview, which has made her one of Israel’s most popular politicians, the very existence of Palestinian identity and culture is anti-Israel. It is alarming, frightening and depressing to see those dangerous trends echoed in Berlin.

The personal and political attack against the curators of the festival is an attack on all of us, on all who wish to speak out freely about the reality in Israel and Palestine — whatever terminology we use — in order to change it for the better.

Inna Michaeli is a feminist activist, a PhD student of Sociology at the Humboldt University of Berlin, and a blogger at Local Call.