In 1990, I was serving as an operations sergeant in the Dir El Balah – a town in the Gaza Strip – in the so-called Civil Administration. On Rosh Hashana of that year, a reservist soldier named Amnon Pomeranz made a fatal error and took the wrong turn. Instead of reaching the Buriej military camp, he reached the Buriej refugee camp. He panicked, drove backwards too fast, and ran over two children. He drove blindly forward, and the vehicle hit a road. An angry mob formed quickly, started throwing stones. Pomranz left the vehicle, threw his gun away, and begged for mercy. The stones kept flying. He went back into the car, tried to start it, failed, was hit, lost consciousness. Three young men ran off to the nearby gas station, came back with jerry cans full of gasoline, poured it, set it on fire.

Our information on the events was extremely sketchy. When we received news about mass fleeing of the camp, Hamoud the AAA – Arab Affairs Advisor – connected the dots, left the base driving wildly, and charged to the place, calling everyone he could think of on the radio. He made it too late: The car was already on fire. Several days later, on the way home – he was driving, I was sitting behind him – he said he wanted to get near, to try and save Pomeranz, but was afraid the car will blow up, as it did several minutes later. His hair turned white.

In the meantime, the GSS arrested the people responsible. It was said that one of the idiots photographed everything – but then again, they photographed lynches, too, no? – and that the GSS managed to get the photographs. One of the two people who set the car on fire went missing. One night – I think it was the second morning following the incident – our two regular GSS officers showed up with an old man and a child, aged five to six years. The child was blindfolded. His trousers were wet with urine. They told me to watch over the child. I fed him out of a tuna-salad-with-tomato-sauce can. He was there for a rather simple reason: He was the brother of the missing suspect, and the investigators informed his family that should the suspect not turn himself in, they would ship the child to the Ansar detainees camp; there was no need detailing what will happen to him there.

* * * *
The IDF keeps terrorizing Awarta, the village from which it claims the murderer(s) of the Fogel family came from. So far, the IDF gunmen have detained, and released, most of the men in the village; the gunmen also detained, and released, dozens of women. Minor pogroms also took place. Speaking to ISM activists in the village, they told me today they estimate that so far, about a thousand residents were detained (although most were released), and that the army keeps 25 residents in custody, among them a 16 year-old girl – earlier it was erroneously reported she is 14 – named Julia Mazen Awad, arrested on Saturday night. As usual, the gunmen caused widespread destruction in the village. Last night, the gunmen stormed a house, put all its inhabitants in one room and denied them food and water until curfew was lifted, at about noon today. One of the people so detained was a six months old baby. And I mean “storm” literally: The gunmen threw dozens of stun grenades into one of the houses. 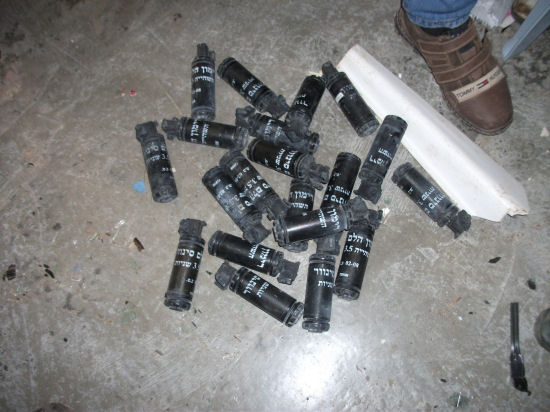 The news about what goes on in Awarta slowly makes it to the general media, even though it keeps peddling the message of the security system, according to which there will soon be a breakthrough in the investigation. In the meantime, the IDF carries out extreme rabbi Avihai Rontski’s vision for Awarta (Hebrew): open, unabashed collective punishment. Rontski is no mere rabbi: He’s the former Chief Military Rabbi, known for such sage advice as declaring that as far as Jewish law is concerned, an IDF soldier is forbidden to offer medical treatment to an enemy soldier, and that the only reasons for offering treatment is the fear that Israeli POWs will be similarly treated, and the chance the captive may have useful information.

Arresting almost a thousand people is no way to run a serious investigation. Nobody thinks such a wave of arrests can actually promote an investigation; it is more likely to drown the few investigators in a sea of information they cannot corroborate. Even 25 detainees is somewhat over the top in an investigation looking for two, and perhaps only one, perpetrator.

So what’s going on? I suspect that what happened in Dir El Balah in 1990 now takes place in Awarta. The detaining, particularly of women, is intended to terrorize the suspects and make them turn themselves in. As any ruthless regime knows, there’s no better way to force someone to submit than taking his relatives hostage. A man may risk his own life; he is much less likely to do so when his family is under threat. And the GSS, needless to say, is not noted for protecting its detainees’ rights.

If that’s the trick, so far it is not working. The need for repeated raids, for more arrests, proves that the suspects – assuming there are any – are yet to turn themselves in. And this has been going on for a month now. Perhaps they are have coarsened, and no longer care about the suffering of their relatives; perhaps the gunmen and the GSS are looking at the wrong place.

If and when the GSS proudly announces it made an arrest, which is doubtful given the amount of time that passed, one must bear in mind the methods used to achieve it. People who think the Palestinians are something less than human, that they will not ask for vengeance for senseless injustice, should not play the surprised victim when rage and hatred combust in the only way people who lack a formal army, tanks and air force, are capable of.