Prime Minister Netanyahu is fanning the flames of a confrontation with Jewish Home leader Naftali Bennett. For now the public rift serves both sides. 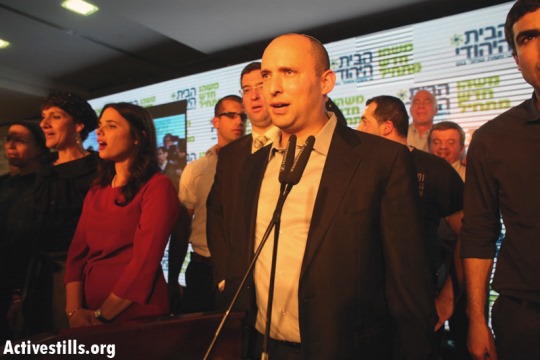 Concern is growing among the settlers over Kerry’s peace initiative. I heard a person close to the Yesha Council – the settlers’ main advocacy and lobbying organization – say that at the council’s most recent general assembly, people used terms that haven’t been heard since Oslo days.

Naftali Bennett, head of the Jewish Home party (formally the National Religious party) attacked Prime Minister Netanyahu earlier this week for floating the idea that Israeli settlers would remain in a future Palestinian state, under Palestinian rule. Speaking at the INSS forum, Bennett said, “our children will not forgive the leader who gives up the land.” Other settler leaders praised Bennett for his statement.

Both parties are benefiting from the public rift so far: Bennett is scoring points with his base and positioning himself as the main figure opposing the Kerry process – Defense Minister Ya’alon was the front runner in recent weeks. Meanwhile, Netanyahu is building up his appeal in the Center and is strengthening his credibility with the Americans and Europeans as a leader who is willing to pay a political price for his commitment to the diplomatic process. It is telling that both Bibi and Bennett’s polling numbers have gone up in recent weeks; in that regard, this is the same old political theater of the previous couple of decades.

But Bennett could very well find himself outside the government soon. This morning (Wednesday), the prime minister’s proxies demanded that Bennett apologize for speaking out against Netanyahu. More so, it seems that the Prime Minister’s Office is fanning the flames rather than toning down the controversy, as he usually does.

UPDATE: Channel 2’s political reporter Amit Segal reported that Netanayhu has put an ultimatum before Bennett: apologize for your comments by Sunday 10 am, or get fired. UPDATE II: Bennett apologized. The Jewish Home’s leader wants the confrontation, but not at the price of leaving the government.

It’s worth recalling that Netanyahu never wanted Bennett in his government and was forced to bring him into the coalition because of a political pact the settlers made with Yair Lapid’s Yesh Atid party. Beyond the personal grudge Netanyahu has against Bennett – who is his former chief of staff – Bibi knows that a centrist government is not only more acceptable to the world, but also more stable (since the opposition is composed of far-right and far-left parties, which can’t really cooperate on many issues).

Today, Lapid is much weaker and his pact with Bennett is pretty much over. Even if it wasn’t, Lapid’s pragmatic base wouldn’t allow him to leave the government in order to save the settlers. The fact that the Labor party is now headed by Isaac Herzog, who is far less confrontational than Shelly Yachimovitz, also makes life easier for Netanyahu. Herzog will be willing to enter the government as soon as the settlers leave it.

A greater concern for Netanyahu comes from within his own Likud party. But even there, hardliners like Ze’ev Elkin, Tzipi Hotovely and Danny Danon might stay in the government (they are all deputy ministers) until Bibi publicly commits to concessions. If they do leave and join MK Moshe Feiglin in the Likud’s internal opposition, Netanyahu will still have enough votes to pass any agreement he wants, due to the support of the Left.

I still don’t think Netanyahu is getting any closer to allowing the establishment of a viable Palestinian state, or even to negotiating earnestly with the Palestinian Authority. Bibi hasn’t changed; he still prefers the status quo, but given the international pressure he would like to reach a new understanding with the Americans and Europeans. This is the “agreement with the world” people in the government are talking about right now – a scenario in which Israel says “yes” to some elements of the Kerry initiative and regains legitimacy without fully committing to a Palestinian state or ending the occupation. That’s why I see more reasons for concern than for hope in the Kerry process.

Still, the settlers’ departure from the government, if it indeed takes place, is good news in and of itself. The alliance between the Center and the hard-right was the dominant feature of Israeli politics in recent years. It led to some dangerous developments, both in terms of public discourse and in legislation – from the ‘Nakba Law‘ to the Prawer Plan. This trend might subside a bit, and that is a blessing on its own. The chaos in the coalition was already evident this morning, when opposition MKs in the Constitution, Law and Justice Committee were able to block (for now) an attempt to raise the Knesset election threshold, a move that directly targeted Palestinian representation in the Israeli parliament.

Related:
Netanyahu steps up demands, wants settlers to remain in Palestinian state
Peace groups should criticize Kerry too
The only two-state solution that might work