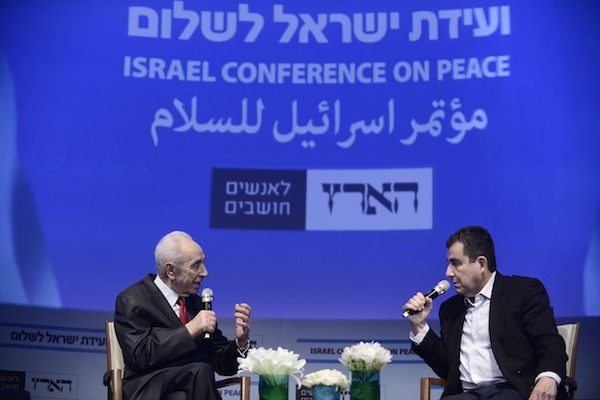 Eight days after American journalist Danielle Berrin published allegations of sexual assault against an Israeli journalist who she refused to name, Haaretz columnist and author Ari Shavit identified himself on Thursday and issued an apology “from the bottom of his heart for this misunderstanding.”

Those eight days were filled with speculation that the “dark eyed” and “black haired” author of a highly popular book in the American Jewish community was in fact Shavit. In the Israeli media, there was far more talk about uncovering his identity than about the act itself and its implications. In that sense it is unfortunate that she didn’t name him, especially since her story describes no less than sexual assault — the crime of forcible touching.

In his apology Shavit writes that he “wrongly interpreted the interaction between us” and that until he read her story, he considered it to have been a “friendly encounter” that included “elements of courtship,” and that he did not mean to cause her any discomfort or hurt her feelings.

Berrin’s hints left almost no question it was in fact Shavit, so it makes sense that Haaretz understood Shavit would have to identify himself and issue an apology to try and get ahead of the story. Haaretz has yet to issue any statement* — neither a condemnation of Shavit nor the act itself — and it remains unclear whether it has plans to take any action against him.

Shavit is one the paper’s most prominent columnists, and is especially well known among the American Jewish community, to which he regularly speaks. Israel’s Channel 10, which employs Shavit as a commentator, has said it is deliberating how to respond. Hillel, the North American campus group, already issued a statement last night that it is suspending Shavit’s campus tour.

Asked for comment, Haaretz Editor-in-Chief Aluf Benn told +972 he has no comment at this time, and will update if there is. My sense is that they are still deliberating what to say, and whether this will blow over and they will only have to issue a formal condemnation — without actually suspending or firing Shavit. But the clock is ticking. Meanwhile the silence of Haaretz and many of its prominent columnists is deafening. I have only seen their diplomatic correspondent, Barak Ravid, tweet anything remotely critical:

Sorry Ari, I am still not convinced https://t.co/wKa1W1nXxC

Haaretz should have already issued a statement condemning the specific act, condemning sexual assault on a whole — and distanced itself from Ari Shavit — at the very least by suspending him until further notice.

But what is perhaps most enraging about this story is Shavit’s response. As opposed to Donald Trump, who has systematically denied the growing number of sexual harassment and assault allegations against him — and has even chosen to verbally assault some of his accusers — Shavit issued an apology and presumably took responsibility. But in my view, calling what happened with Berrin a “misunderstanding” or a “misreading of the situation” is almost worse than denial. It is Shavit appearing to admit to an act without actually admitting anything at all. After all how could he admit to something that he was not aware of?

Can one really believe that Shavit was not aware that his grabbing and pawing and leering was unwelcome? Fine, not the first time, but the second time, after she pulled away? Can anyone really take him seriously? And if he really was unaware then that makes it all the more worrisome, since it shows just how oblivious he and so many other men are to the concept of basic respect for a woman’s body and autonomy.

And even if we put that aside for a moment, the fact that Shavit — an older, powerful, white man — allowed himself to engage in any sexual conduct during a professional meeting with a fellow journalist is bad enough. That alone is sufficient for Haaretz to say it can no longer work with him.

Haaretz, we are waiting for your condemnation and your action.

UPDATE, 11:27 a.m.: Twenty-four hours after identifying himself and 12 hours after this post was originally published, Ari Shavit announced he is “taking time off from his journalistic work.” Haaretz issued a statement condemning sexual assault.