For Lisa Goldman, the memory of Ariel Sharon evokes images of civilian massacres, suicide bombings, bloody curfews and a political shift in Israeli society to the right. 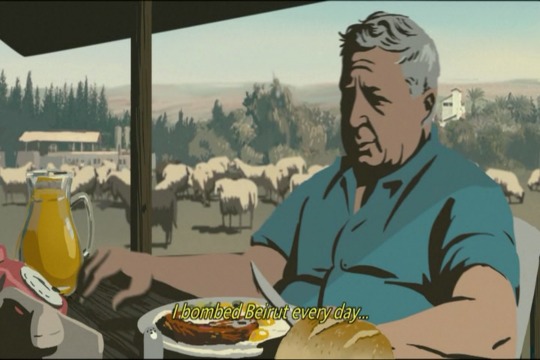 Screenshot of Ariel Sharon from the animated Israeli film “Waltz With Bashir.”

My earliest memory of Ariel Sharon involves vivid color photographs of corpses. I was just waking up to the world and intensely interested in current affairs, so I spent quite a bit of time in the library of my quiet, Canadian all girls’ school, thumbing through newsmagazines like Newsweek, Time and Life. Which is how I learned about the massacre of of Palestinians at Sabra and Shatila and saw those gut-churning images of sprawled, bloated, bloody bodies — piles of them. Men and women. Children.

More than three decades later, it is those photographs that flicker automatically across my inner movie screen in response to any mention of Ariel Sharon’s name. Not the famous black-and-white photograph of General Sharon with his bandaged head after he was wounded on a Sinai battlefield during the 1973 war. And not the later image of the warrior turned farmer, with a sheep slung over his shoulders. For me he was primarily a war criminal. I do not celebrate his death, but I don’t mourn him either.

I was educated — at my Jewish elementary school, at summer camp and at synagogue — to think of the State of Israel as a special, better place. Sabra and Shatila forced me to question that perception. In a way, Ariel Sharon hovered over every watershed event in the evolution of my political views, from 1982 to 2005. That includes reading as an undergraduate about the Qibya Massacre that he led in 1953, when he and his soldiers killed 69 Palestinian villagers, primarily women and children.

At the Friday night dinner table in September 1982 my stepfather, who had a subscription to Commentary Magazine, told me sharply that it wasn’t the Israelis who killed the Palestinians at Sabra and Shatila. It was the Christian Lebanese. The subtext: Christians were killing Muslims and everyone was trying to blame the Jews, as usual. This was the received narrative, as far as I remember, among mainstream Jews in the diaspora communities.

In Israel the popular view was somewhat different. The government-appointed Kahan Commission, charged with investigating the massacre, wrote in their report that Sharon, then minister of defense, bore personal responsibility for what had happened. In response to that report, tens of thousands of Israelis demonstrated in central Tel Aviv to demand his resignation. After that Sharon was a pariah for many years, which seemed like the proper fate for a murderer-by-proxy. But in Israel disgraced public figures have a talent for resurrecting themselves from the presumed dead, particularly when they have a sixth sense for populist sentiment. Sharon was the champion of that game.

I was living in Tel Aviv in 2000 when, surrounded by body guards, Sharon stood in front of the Dome of the Rock in Jerusalem’s Old City, the golden edifice that is probably the most prominent visual symbol of Palestinian nationhood, and told the assembled media representatives that this place would always be under Israeli control. That incident was a populist tour de force. Then-prime minister Ehud Barak had just returned from the failed Camp David talks with Yasser Arafat and announced that there was “no partner” for peace. He offered no alternative plan to the already shaky Oslo Accords. Meanwhile, no leader or analyst had managed to assuage popular fears that the Jewish holy sites of the Old City — like the Western Wall and the Temple Mount — would become inaccessible to Israelis if East Jerusalem were the capital of a future Palestinian state. Sharon played to those fears. He also added weight to the concerns of Palestinians who suspected that Israel had no intention of withdrawing from the occupied territories, ever.

The Second Intifada, also called the Al Aqsa Intifada, began the following day, with violent clashes in the Old City that soon spread to the rest of the West Bank. Things were falling apart at such a rapid pace that I hardly ever turned off the television, lest I miss yet another news bulletin about a siege or a bombing. One week the news presenters were talking about peace in the Middle East and driving to Damascus for lunch; and the next they were live broadcasting the lynching of two reserve soldiers who lost their way while driving in the West Bank.

It would be shallow and inaccurate to blame any one person for the disastrous events of the following months and years. All the players were short sighted, self serving and mendacious — Yasser Arafat, Ehud Barak, the army generals, the PLO leadership and the ambulance-chasing media with their three-inch, red font headlines. But I could not accept that out of all that mess of suicide bombings, army incursions and political collapse, the result was the 2001 election of Ariel Sharon as prime minister. Even more disturbing: that many of my liberal friends were somehow relieved. Because “at least he was a leader” and because he was a military man, the hero of the 1973 war, and in Israel the number one concern is always security. And so, while many of my friends’ opinions shifted rightward, mine began to move in the opposite direction.

For awhile in 2001-2, there was a suicide bombing nearly every day. People were getting blown up while sitting in a cafe, traveling on a bus, shopping for groceries or dancing in a club. The randomness was discombobulating and the fear was pervasive. On more than one occasion I was at home in my apartment when there was another window-rattling explosion, followed by the nearly immediate wail of sirens from what often sounded like every emergency vehicle in Tel Aviv approaching from six different directions. Civilians were dying every day, but Sharon remained a popular prime minister. A warrior.

Sharon’s response to the bombings was to have the army re-invade the West Bank. Tanks rolled into Ramallah, Jenin, Nablus and Bethlehem. Heavy weapons were fired into densely populated civilian areas. The Hebrew media reported the deaths of many nameless Palestinian civilians, often omitting or glossing over the circumstances. Houses were crushed and people lived for days under curfew, without water or electricity.

One of my most vivid memories of that time is of sitting at an outdoor cafe on Rothschild Boulevard in Tel Aviv as a taxi driver passed by, his radio broadcasting a report about the army’s actions in Ramallah. As he listened, the driver pumped his fist out the window and yelled, “Give it to them, Sharon! Give it to them hard!”

Three years later, sitting in a Ramallah cafe with a Palestinian colleague, I listened as she told me about watching her fiance die from an Israeli bullet that hit him in the abdomen, and about a mutual acquaintance who was prevented by the army from attending his mother’s funeral.

So Sharon “gave it to them.” And he started building the wall/fence/barrier that so many people credit with preventing suicide bombers. Never mind that correlation is not the same as causality. Or that the barrier is porous and was never finished. Or, ethically speaking, that it dug deep into the West Bank, gobbled up Palestinian land, destroyed their livelihoods and made their homes into prisons. It made Israelis feel safer.

During this time, Sharon was dogged by widely reported corruption scandals involving kickbacks and ill-acquired campaign funding. But somehow he evaded prosecution. Or his son Omri took the fall, resigning his Knesset seat and serving nine months in jail.

And then in 2003 Sharon announced the unilateral withdrawal of Israeli settlements and the army from Gaza, which he scheduled for the summer of 2005. For this, the godfather of the settlement movement was credited with being a visionary leader who had seen the light. He had come to understand that the settlements were unsustainable and was willing to undertake the politically risky, unpopular but necessary job of dismantling them.

But in an interview with Ari Shavit for Haaretz, Dov Weissglass, one of Sharon’s closest advisors, said explicitly that the point of withdrawing from the relatively insignificant settlements, where only about 7,000 Israelis lived, was to consolidate Israeli control over the West Bank. Weissglass’s assertion has not been absorbed into the popular narrative.

For the Palestinians, Gaza became an open air prison after the withdrawal of 2005. The Israeli army continues to control the sea and the border crossings. They decide who and what may enter or leave the territory. Army drones hover overhead, keeping track of movement below. People with family members in the West Bank are almost never allowed to visit them; nor are residents of the West Bank allowed to visit Gaza.

The former settlers, meanwhile, have not succeeded in rebuilding their lives. More than eight years after the disengagement, they still suffer from depression and various related illnesses, and complain that they were not adequately compensated for their homes and lost income. Their children feel betrayed by the state; they are angry and radicalized. When I spoke to them in Gaza back in 2005, they scared me with their violent racism and their hyper nationalism. They still scare me. And they should scare you, too.