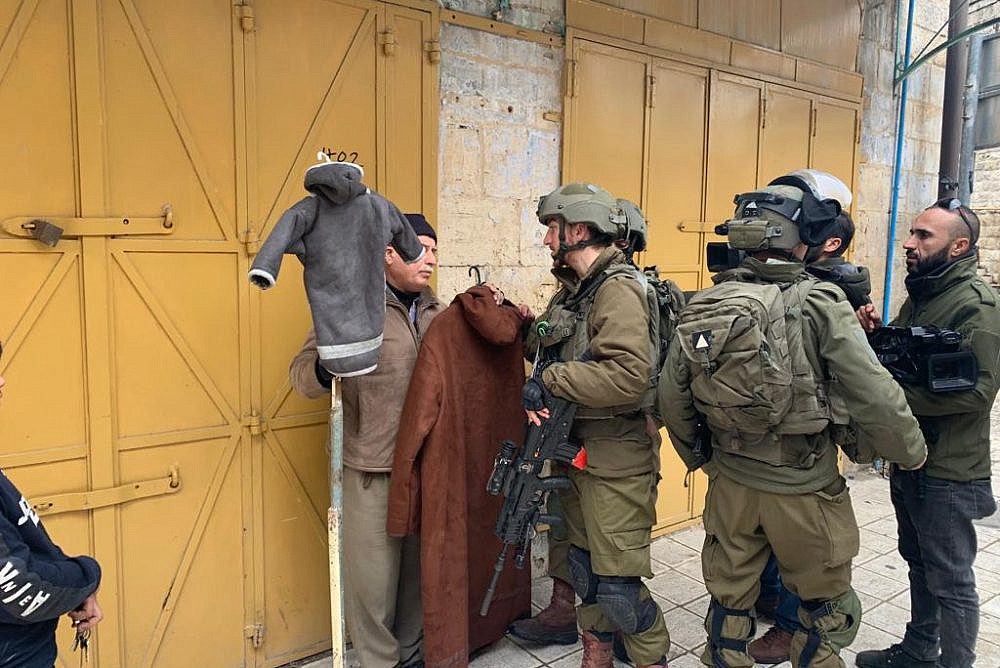 Last week, the Israeli army shut 45 Palestinian stores in the Old City of Hebron in the occupied West Bank, without telling the business owners why or when they would be permitted to reopen.

The closure, which Palestinian residents described as collective punishment, began on Jan. 27 after the shops were targeted by Israeli settlers during confrontations between Palestinians and Jewish religious students in the nearby Hebron Yeshiva. According to eyewitness reports and video footage, the confrontations— which took place in the H2 area of the city, under full Israeli military control — included stone throwing by both parties, with one of the Jewish students suffering a light head injury.

Following an inquiry by +972 and Local Call, the shops were permitted to reopen on Sunday.

“I was sitting in my shop when settlers began pelting it with rocks,” said Bader al-Tamimi last week, whose appliance store was among those shut by the IDF. “They broke some of my cameras, and some of my customers were injured. I took cover inside the shop. The barrage went on for some 40 minutes, and soldiers stationed nearby didn’t do a thing.”

“When Palestinian youths arrived and began throwing stones at the settlers, the soldiers started firing tear gas canisters and rubber bullets at the Palestinians. The officer in charge then told us to close the stores, and the soldiers began locking the doors. They haven’t allowed us to reopen ever since.” Al-Tamimi added that he believed the move to be part of an ongoing attempt to Judaize the area. 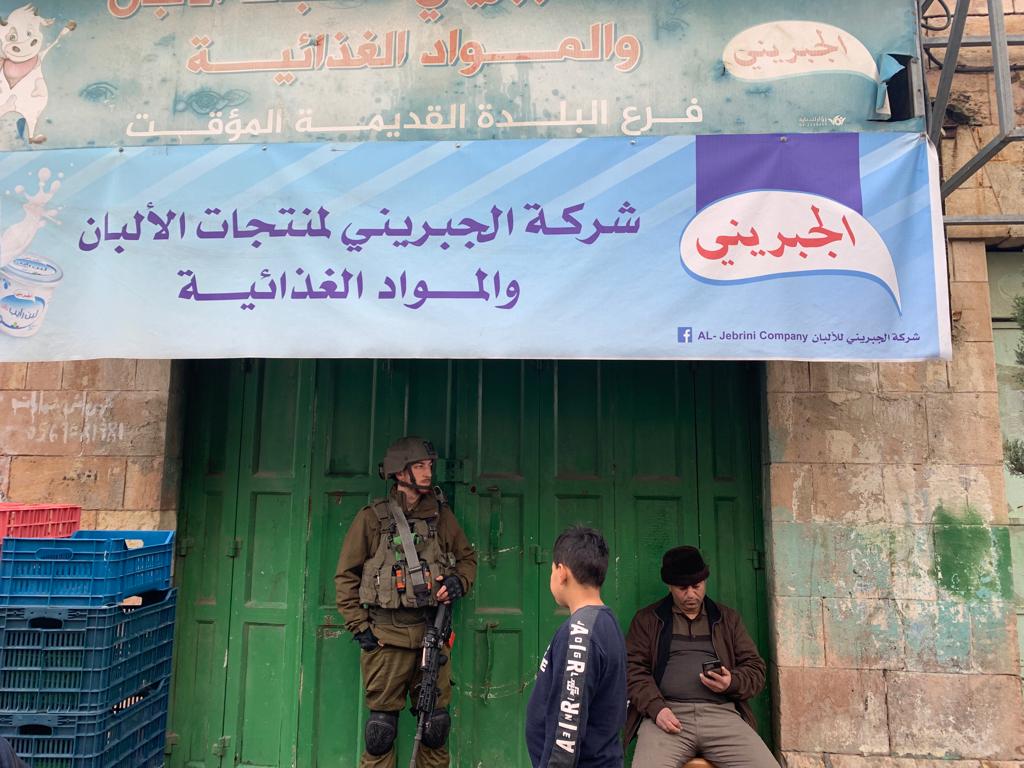 An Israeli soldier stands in front of a Palestinian-owned shop in Hebron’s Old City that has been forced to close under orders of the Israeli army, Hebron, occupied West Bank, Jan. 29, 2022. (Basil al-Adraa)

On Saturday, owners tried to reopen their stores, only to have soldiers emerge from the yeshiva and order them to lock up again. The soldiers also entered several shops to tell customers that all shopping is prohibited and that they must leave. Later on, the commander declared the area to be a closed military zone and ordered soldiers to form a line in front of the shops to prevent anyone from entering.

The settlers, for their part, claim that Palestinians instigated the confrontations by attacking the yeshiva with stones, and that the yeshiva students were only throwing stones in retaliation. A video circulating on social media showed students standing on the roof of the yeshiva and throwing rocks at Palestinians down below.

Be that as it may, it is clear that the shop owners targeted by the Israeli military were not involved in the confrontations, yet they were still made to suffer severe economic consequences.

This is far from the first time Palestinian businesses in the city have been shut down by the Israeli army. The shops in question are in close proximity to Shuhada Street, once a thriving commercial thoroughfare that was closed to Palestinians after Israeli settler Baruch Goldstein massacred 29 worshippers in the nearby Ibrahimi Mosque in April 1994. According to Israeli human rights group B’Tselem, some 2,000 Palestinian businesses have closed down in the area since the 1990s, whether due to sweeping limitations on freedom of movement or because of direct closure orders by Israeli authorities.

Aref Jabar, a local resident and activist, told +972 that the closure of the 45 businesses last week can be seen as part of the same pattern. “The forced closure is a rerun of the policy already implemented on Shuhada Street,” he said. “The settlers know from past experience that whenever violence occurs, it is the Palestinians who get punished. This is why they attacked the shops last Tuesday. This brings them political gains — the expulsion of Palestinians from the Old City. Soldiers normally order shops around here to close only on Saturdays. This is the first time they’ve been kept shut continuously for over a week.” 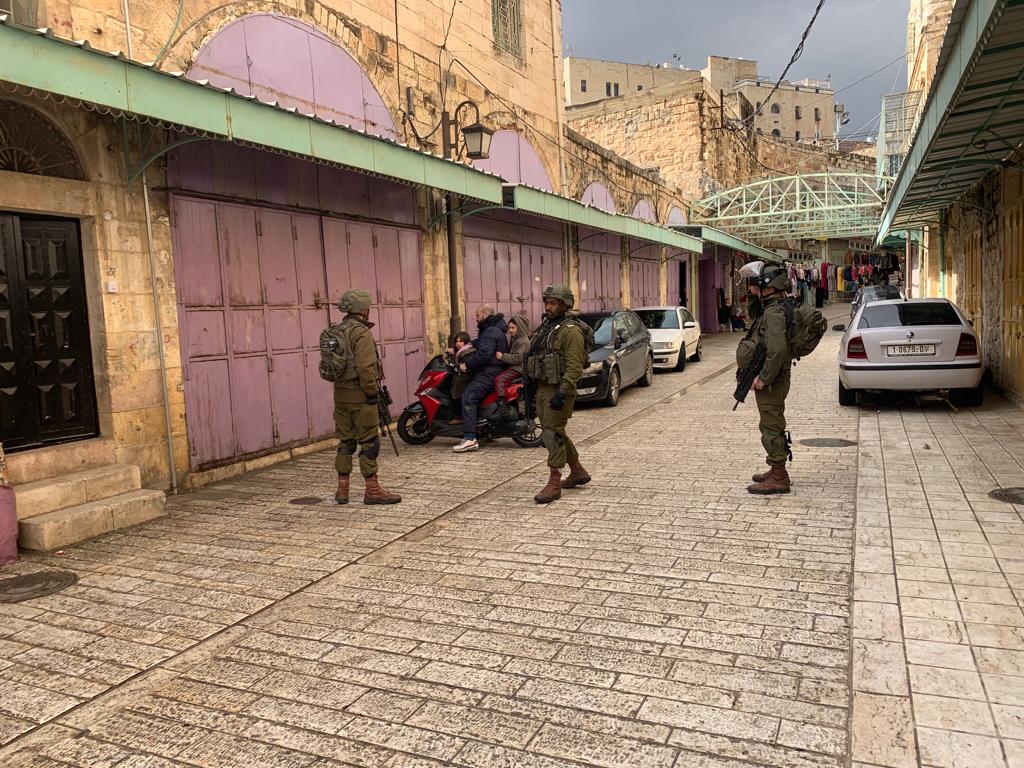 Israeli soldiers seen on a central thoroughfare in Hebron’s Old City, after having forced the businesses there to close, Hebron, occupied West Bank, Jan. 29, 2022. (Basil al-Adraa)

An Israeli army spokesperson told +972 that in order to “preserve public order,” the commander of the Yehuda Brigade decided to use his authority to temporarily shut down a number of shops close to the sites “where riots took place,” and where businesses were “used for stone-throwing and for facilitating escape from security forces.”