A demonstration in solidarity with Palestinian prisoners on hunger strike last week ended in the illegal arrest of 17 activists. The police violence they encountered in detention – which included threats of rape and the use of electroshock Taser guns –  shows just what the authorities think of the basic right to human dignity and the freedom of expression and protest. 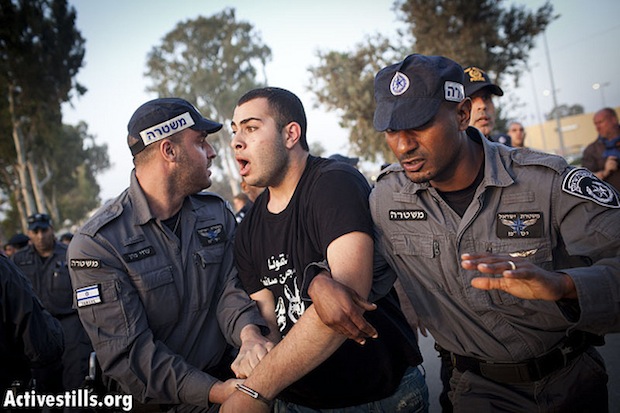 Last Thursday, May 3, 15 Israeli citizens – Palestinians and Jews (including one resident of Jerusalem) – as well as one American and one Canadian, were violently arrested after a demonstration outside the Ramle Prison in solidarity with Palestinian administrative detainees on hunger strike. Eight were arrested at the demonstration and then nine more outside the police station after the protest had ended. Adalah attorney Orna Kohn told +972 that even though the nine arrested at the police station were not within the parameters of the legal protest by the prison, “there were less than 50 people there, so it does not constitute illegal assembly anyway.”

Besides there being no pretense for the arrests since it was a legal and nonviolent protest, the activists in custody were reportedly beaten, verbally abused, threatened with rape, shocked by Taser guns while handcuffed, and held in custody beyond the time alloted by the judge.

Adalah, which is providing legal representation for all 17 activists, has filed a complaint with the Police Investigation Unit regarding the police brutality, and a complaint with the court regarding their prolonged custody. +972 contacted a police spokesperson for response but no comment was provided. Here is a rundown of events according to the Adalah press release from May 7:

On 3 May 2012, approximately 200 protestors gathered outside the Ramle Prison compound, where hunger strikers are being held in the Israel Prisons Service (IPS) medical center. They had a permit to protest issued by the police. At approximately 6:45 pm, after the demonstration ended and most participants had left, several individuals attempted to continue protesting by forming a picket line, which does not require a permit under Israeli law. However, the police violently attacked the group, beating them and using Tasers, even after the people were handcuffed. Eight participants including a minor were arrested.

After the initial arrests, some of protestors went to the police station to find out about the others’ status. There, the police attacked and beat the remaining protestors and arrested an additional nine people. Another five individuals were fined for disturbing the peace. Some of the women detained were sexually harassed, including threats of rape and repeatedly being called “bitches” and “whores.”

Irene Nasser, one of those arrested, has provided +972 with her account of the events. Here is an excerpt, detailing what she experienced while being held in custody, her legs and hands shackled.

They pushed them [another three female arrestees] into the walls and crudely screamed at them to shut their mouths. While we were all already next to each other, the officers began kicking us. At that point we once again heard lots of shouting and heard them pushing some of the men into a second room, where they were shackled. There was one man who five officers dragged on the floor – it appeared to me that he was handcuffed – and simply began shocking him with a taser for several minutes continuously. The doors were open and we shouted at the officers to stop shocking him, and saying it was dangerous.

Three or four officers entered our room, shouted at us to shut up, shoved us, and told us to shut our mouths. One of the officers threatened us, “Do you want to be hit? Just try and do something. Do you want to be hit?” and the whole while they continued shocking the man in the hall with a taser. I was scared. The officers stood over him while he was lying on the floor, no less than five of them, and his whole body was shaking from the electric shocks. He did not resist – they continued to shock him with the taser on his upper body. He only screamed in pain.

Throughout the night, for several hours we heard lots of screams from the room the men were in. Both screams of pain and the officers screaming, including cursing. We were all very much shaking, six women, we tried to calm each other. I had my shackles on for hours. Three of us were on benches and three were on the floor. We were all in shock. We were trembling, we did not know what would happen. There was a lot of violence. I wanted to try to be calm. I was scared by I tried to remain calm. Several minutes later we began talking a bit amongst ourselves, trying to make jokes. Our bodies were in pain from the officers hitting us. On (P), (Th) and (D’s) bodies there were lots of scratches and bruises. (P) had two large scratches on her neck and somebody else was bleeding from her wrist.

Everyone had lots of bruises on our bodies. At some point (P) and (Th) stood up for a few minutes. Three officers entered and started shouting again. They told them to sit down, pushed all of us onto the floor, piling onto each other. One (of the officers) was holding a taser and used it to electrically shock us, for no reason, we were a human pile on the floor, and he tasered us. We shouted and we all were very terrified. I was shoved aside and sat on a chair. The officer with the taser approached me and tried to taser me, but accidentally hit my bag. They screamed at us to sit, and we answered that we were sitting, but they continued to shout, beat and curse at us.

According to a testimony published in Electronic Intifada, Thaira Zoabi, another protester arrested at the police station, was spit in the face by a policeman and threatened with rape:

The Israeli forces used [taser guns] and I have bruises on my arms and legs. I saw them open a protester’s mouth by force and spit in it, and they spit in my face as well. They beat us and used massive verbal violence. They did a full body search. While being under custody, a police officer of Ramle district addressed both me and another female activist while being cuffed with verbal sexual harassment, threatening to rape us. I have to admit I burst in tears.

Another woman who was among those arrested, Amany Khalifa, shared this with +972:

This was my first time being arrested, and it was a violent experience, physically, mentally and sexually. As a Palestinian and a female, I felt doubly oppressed by how the male police officers treated us. They said to us: “Dirty Arabs, we’ll show you what Palestine is,” and called us “bitches,” “whores,” and things like this. I clearly heard them threaten us to not even think about protesting again, certainly not within the boundaries of the State of Israel. It is clear the authorities are adamant about silencing any popular resistance, and especially anything inside the 1948 borders.

The activists were released to house arrest for 3 days on Friday after signing release terms of NIS 10,000 each. They are not allowed to speak to one another or anyone else who was at the demonstration for 14 days, or go within 50 meters of the Ramle prison compound. There are various charges filed against them by the police, including incitement, rioting and attacking an officer. There is as of yet no date set regarding the indictment. Meanwhile, Adalah is awaiting a response regarding the two complaints filed.

+972 will provide updates on the affair as it transpires.