Shackled and drowning in an adult prison uniform, 14 year old Islam Tamimi was brought before a military court this morning for a hearing on his detention. Exhausted and nervous, Tamimi sat before a court room of soldiers. Tamimi was arrested during a night raid in the village of Nabi Saleh early Sunday morning. After soldiers arrested the child, they forced him to stand outside in the cold until 09h00 Sunday morning. Soldiers also repeatedly threatened the child while he was in their custody.

Upon hearing the news, defense lawyers for Tamimi contacted the army and police to ask permission to meet with the child before his investigation. Interrogators responded that access would be granted to the child’s lawyers and parents, however this never happened. Tamimi was taken for investigation at 09h30 on Sunday morning and only at 14h00 in the afternoon did his lawyers gain access to their client. The investigation of the child, who was taken from his bed in the middle of night, forced to stand in the cold and received threats from fully armed soldiers, took eight hours in total. The army has not presented any photographic or v ideographic evidence that the child was throwing stones. Instead the army has subjected the child to a program of trauma and psychological torture in order to extract anything they would like out of him.

In the courthouse this morning, after explaining the arrest and interrogation of the child, Tamimi’s defense lawyer pleaded with the judge to view the child as a scared and traumatized 14 year old. However, the army prosecutor said that the child was considered ‘extremely dangerous’ and for that reason must stay in jail for the entire period of his trial. The army prosecutor also informed the court that the army had ‘secret’ evidence against the child which the defense was not entitled to view. The military judge presiding over the hearing asked the prosecutor why the child was not given proper legal recourse nor allowed access to his lawyer. The army prosecutor responded simply “it was authorized.” The judge pushed furthur and asked, “it was authorized by whom?” Again, the answer from the army was short and Kafkaesque, “it was authorized by the person who authorizes.”

With that the child was taken back to jail from the courtroom. He will have another hearing tomorrow morning to determine if he will stay in jail during the entire process of his trial. The answer is surely yes.

One hour after Isalm Tamimi was taken back to his jail cell, the popular committee leader of Nabi Saleh, Bassam Tamimi, was arrested in the village along with two 15 year old boys. Tamimi was taken in for questioning, most likely in reference to the testimony unethically gleaned from Islam Tamimi. After two hours Bassam was released, however, at the time of this writing the two 15 year old children remain in custody. According to Tamimi, he was beaten while in Israeli custody. The location of the two arrested children are currently unknown. 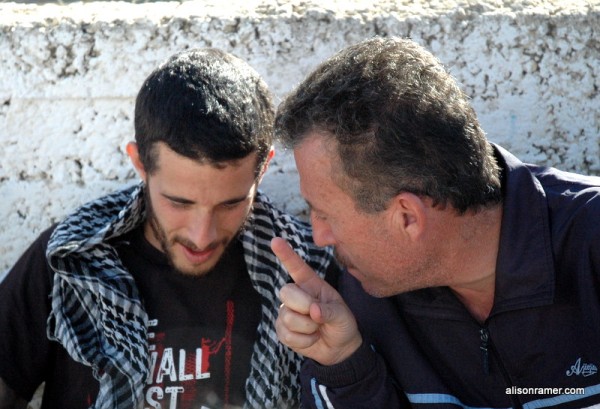 Villagers fear that in the coming days there will be another round of night raids and arrests of the village’s youth. The strategy that Israel is using against Nabi Saleh is very similar to the one employed against the village of Bil’in. The popular committee leader of Bil’in, Abdallah Abu Rahmah has been in jail for over 13 months on charges of incitement. His conviction was based on testimonies of three 14 year old children from the village.

While the world is debating the death of the two state solution, Israel maintains a strict and harsh control of unarmed civil mobilization efforts against the occupation. The real failure of the Palestinian Authority, as shown in the Palestine Papers, is its inability to nurture mass unarmed civil resistance to Israeli occupation. The popular struggle in villages like Bil’in, Ni’ilin and Nabi Saleh presents a unique form of community-based organizing and resistance in the tradition of the first Palestinian Intifada. These diverse, non-partisan committees lead community resistance to Israeli occupation in various forms, such as marches, strikes, demonstrations, direct actions and legal campaigns, as well as supporting boycott, divestment and sanctions (BDS). However, the movement is being crushed in the form of extreme violence during demonstrations (21 unarmed demonstrators have been killed since 2005 and thousands have been injuried), criminal misconduct by Israeli soldiers, and the use of the occupation’s legal system to imprison popular committee leaders such as Abdallah Abu Rahmah.