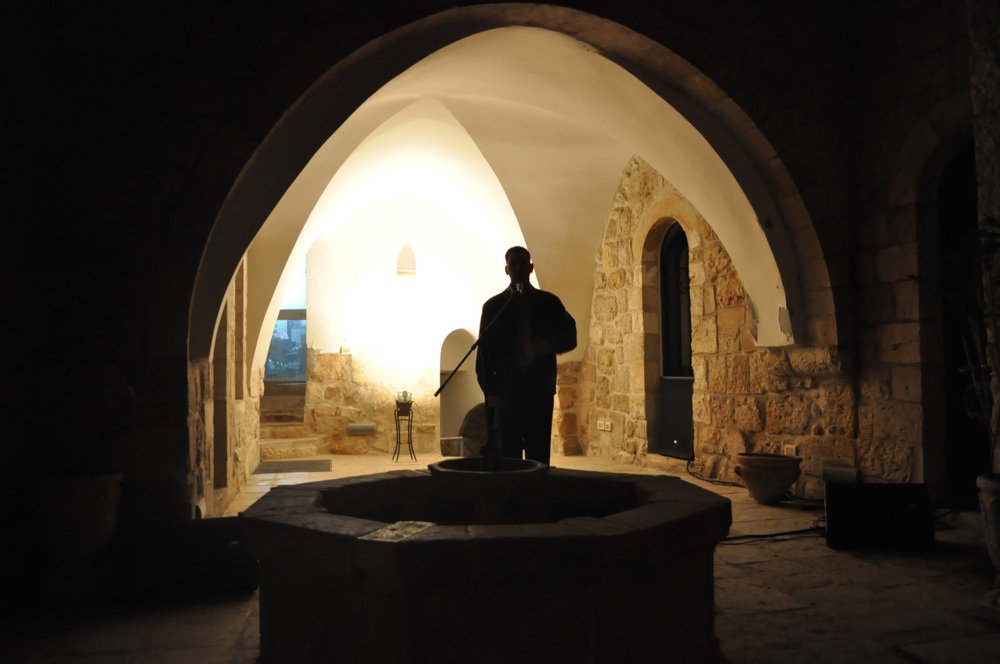 The Muezzin of Al-Aqsa Mosque performs in the Old City (photo: Omar Rahman)

It is no secret that East Jerusalem has suffered from some of the worst crimes of Israeli occupation and that life for its Palestinian residents is an everyday struggle. Colonization, home demolitions, discriminatory legislation, residency revocation, are just a few of the cruel and unjust practices that Israel employs to shift the demographic balance of the city by forcing its Arabs out.

Therefore, it came as little shock to me when I asked organizers of the three-day Al-Quds Underground Festival—which came to an end on Saturday—what their motivations were for starting the project.

It began in 2009, when Jerusalem was named the Arab Capital of Culture, an annual honor presented by the Arab League and UNESCO to a major city in the Arab World in celebration of their cultural heritage. This year it was given to Sirte, the Libyan city that now lies in ashes.

When Jerusalem was designated the capital two years ago, it posed special problems for a city under occupation. The Israeli government prevented Jerusalemite Palestinians from taking part by prohibiting any public display of their culture. Events were disrupted. The media center was closed. The six-day Palestinian Literature Festival held at the Palestinian National Theater was raided by police and shutdown.

Celebrating their culture and patrimony—it seemed for Palestinians—had become illegal in a city that they increasingly felt was being taken from them. It was in that moment that a Dutch composer named Merlijn Twaalfhoven, who had been working in the country for years, decided to take the initiative.

“I thought that this was unacceptable,” said Twaalfhoven, speaking about Israel’s response to the Capital of Arab Culture. “Every people have a right to express their culture. You have a right to work on your identity and celebrating culture is giving a voice to your identity.”

Twaalfhoven began organizing a series of performances by Palestinian and international artists to connect locally and collaborate on an artistic project.

“I felt it must carry on,” he says, thinking back to first days. “I said, let’s go underground. Let’s go to private spaces, hidden spots and safe places for people to express their identity.”

Venues were organized in people’s homes, anywhere they could get away from the prying hand of the authorities. Publicity for the event was circulated by word of mouth only.

It was in this way that I was lucky enough to hear about it from a friend. So, on Saturday, 22 October, I attended the final night of this year’s festival, in what would prove to be an extraordinary experience. The night began in a parking lot of a local church, where a large gathering of Palestinians and foreign expats came together. We were then broken up into small groups to be led by a tour guide. Although there are several distinct performances every year, each small group makes their way to four or five of these, followed by a large performance at the end of the night with everyone in attendance.

Our tour started with a long trek into the Old City at dusk, where all the performances are held. The initial walk is itself an enriching experience as you absorb all the sites and smells, the familiar glow of yellow bulbs on the creased stones of walls and streets, the diverse faces. In the right atmosphere the Old City can be magical. Yet for some, it is also saddening. My friend looks around and laments to me of her time here as a girl, and how the city has changed so drastically that she hardly recognizes it. She says it’s nice to be here again, to occupy this space, where she no longer feels safe to come alone at night. As she says this, we pass a house that supposedly belongs to Ariel Sharon. Israeli soldiers are everywhere. 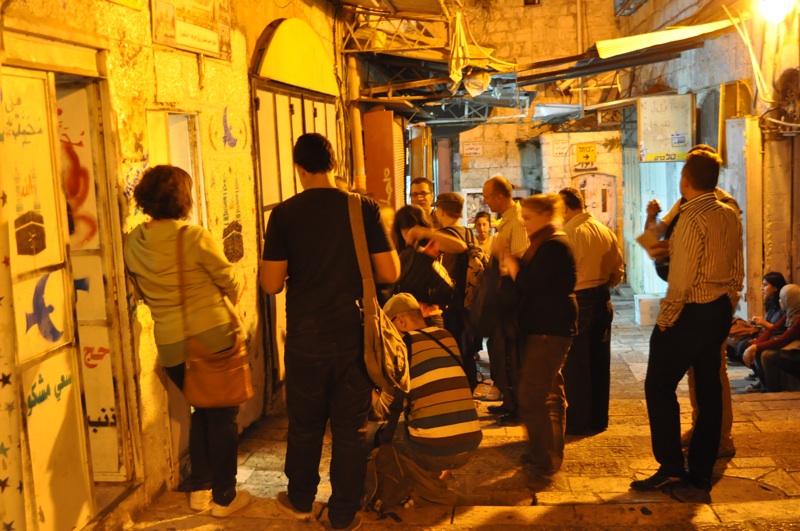 A group waits outside one of the hidden venues in the Old City (photo: Omar Rahman)

At our first location we are greeted by the sound of drumbeats, as a handful of Palestinian youths with sticks tap rhythmically on anything in sight: walls, stone columns, pots and pans, large plastic barrels, even the floor. The whole performance is orchestrated by one of the Dutch DJs, who mixes the beats on his computer for a unique sound. Inside this space of ancient vaulted ceilings, everything is boundless. After the performance is over, the audience is free to meet the musicians and talk. The atmosphere is congenial and informal.

“We are creating encounters,” says Paul Oomen, the musical programmer for the festival.” I think there are a lot of things that can be found in this place that are intriguing to Western artists, and vice versa.” 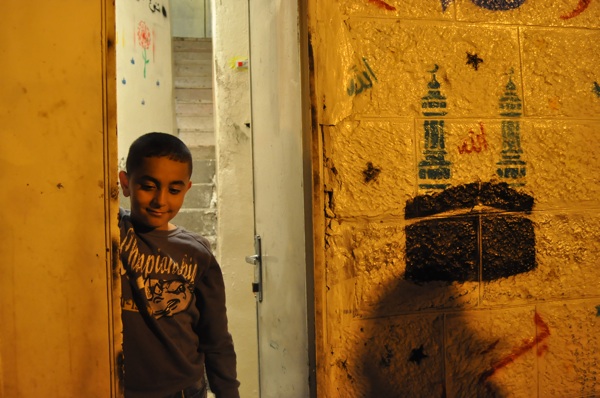 A Palestinian boy stands in the doorway of one of the festival's hidden venues (photo: Omar Rahman)

We move on to our second performance, making a long walk through the Old City, only to end up at another unassuming building. Up the stairs we enter the living room of a Palestinian family, where we all take a seat on sofas, help ourselves to biscuits and coffee, and are entertained by a theatre performance in the most intimate of spaces.

The two players act out a conversation between a Palestinian and a Dutchmen, touching on themes of Western guilt, victimization, and the experiences of those who come to this place to do good.

Behind closed doors, each performance is personal and full of real stories from the lives of Jerusalem’s Palestinian residents. Each show is different than the one that preceded it, yet all are part of a thread that forms the colorful fabric of Jerusalem.

“We are inspired by their stories,” says Oomen. “Jerusalem is an unknown world for us and we want to see what the musicians have to tell.” 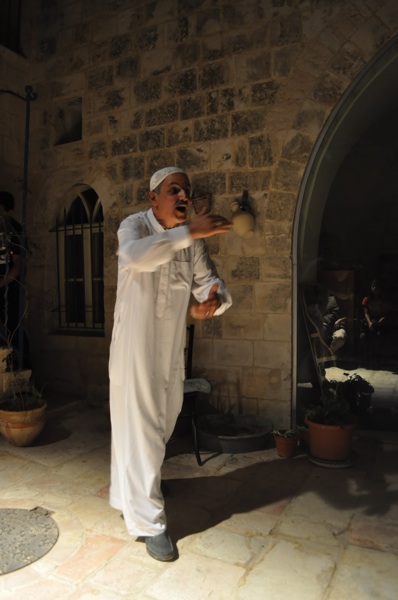 Support for the project is growing locally. Twaalfhoven says he is working on building the infrastructure in the community to carry on.

“We have been received with open arms and more and more people want to participate,” says Oomen.

In a small courtyard, a man dressed in a traditional galabiya somehow has his audience dying of laughter as he describes the experience of his circumcision, which he nostalgically relates to a time long past in Jerusalem.

In a beautifully restored building in one of the poorer sections of the Old City, the muezzin from the Al-Aqsa mosque gives us a spectacular musical performance, his enchanting voice mixed with electronic instrumentals.

On the top floor of the Uzbek House, a member of the venerable Boukhari family, that have resided in Jerusalem for centuries, strums the oud in complete darkness to the sound of Sheikh Boukhari’s voice played on a gramophone. The Qu’ranic recitation seeps out in a way that the speakers of a mosque could never replicate while the Sheikh’s wife shines a flashlight over his pictures hanging on the wall.

By the end of the night, as we walked back to my friend’s car, I was just happy to have been a part of it. 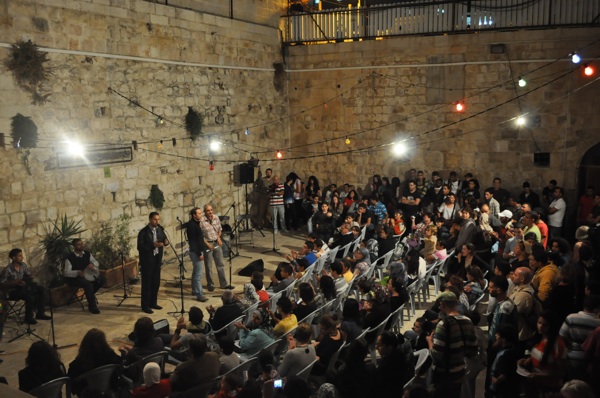 The final performance of the festival is held at the Center for Jerusalem Studies (photo: Omar Rahman)