Facebook in Israel has been flooded all day with reports of cultural figures and venues announcing their decision to boycott the annual ‘White Night’ events sponsored by the Tel Aviv Municipality, in reaction to the weekend’s police violence; meanwhile, over 100 protesters showed up at City Hall on Monday evening and disrupted a planned no-confidence vote against the mayor. 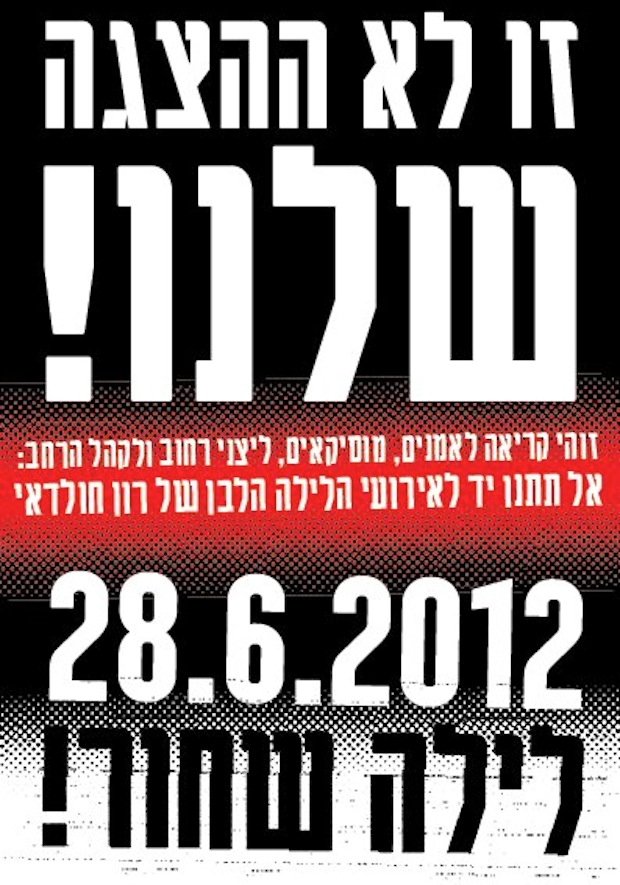 One of the posters calling for a boycott of the White Night: "This is not our show!" We call on artists, musicians, street clowns and the public - do not cooperate with the mayor's White Night. June 28, 2012 Black Night!" (poster by Lahav Halevy)

Following police brutality and violent arrests against protesters in Tel Aviv over the weekend, a variety of Israeli writers, artists and venues have announced that they will be boycotting Tel Aviv’s White Night events this Thursday night. “White Night” is an annual happening celebrating the city’s status as an international site of cultural heritage, bestowed by UNESCO in 2003 to mark the concentration of Bauhaus buildings that comprise what is known as the “White City.”

Since yesterday morning (Sunday), a poster in Hebrew has been circulating on Facebook that calls on artists, gallery owners and cultural figures to boycott Thursday nights’ events, with the slogan: “This is not our White Night!” Another poster had the message:  “Culture is not a fig-leaf for the regime.” The graphic designer behind the posters, Lahav Halevy, told +972 that it has become an “insane snowball” that he did not anticipate coming.

Thus far, well-known Israeli authors such as Etgar Keret and Orly Castel-Bloom have announced the cancellation of a literary event they were scheduled to participate in on Thursday. According to Etgar Keret’s Facebook status:

Following the violence of the police against demonstrators for social justice, and many other violent acts over the last week, we have decided to cancel our participation in the White Nights events scheduled to take place this Thursday, under the sponsorship of the Tel Aviv municipality.

At least five galleries have cancelled their participation as well as music venues like the Ozen Bar and Rothschild 12 –  and the list keeps growing. A popular veteran Israeli band called “Giraffes” also announced cancellation of their planned performance. A Facebook page called “Black Night – The White List” has been created to provide updates on those participating in the boycott. In addition, a demonstration has been called for Thursday evening at 6pm.

Two alternative events are being organized Thursday night in south Tel Aviv – one in the Shapira neighborhood and one in the Neve Sha’anan neighborhood, both of which are impoverished, neglected neighborhoods that have been at the center of the recent anti-immigrant race riots.

Meanwhile, a planned Tel Aviv City Council meeting to discuss the motion for a vote of no-confidence in Tel Aviv Mayor Ron Huldai was disrupted by J14 protest leaders at around 6:30pm on Monday, after activists claimed they were not allowed inside, despite the auditorium being half empty. Those who were inside began shouting, and as a result, the meeting was abandoned. No new date has yet been set. The mayor reportedly had to exit through a back door due to the protests taking place outside.

It is important to note that what has in effect become a cultural boycott of a city-sponsored event to object to state-sponsored repression and unjust policies calls attention to parallel calls by the BDS movement to boycott Israeli institutions and companies in protest of the state’s continued occupation, violation of human rights and blatantly discriminatory and anti-democratic policies. For example, see the recent debate around Alice Walker’s decision not to have her book translated into Hebrew by an Israeli publisher.  Many were immediately outraged by her form of cultural boycott, but seem to be perfectly fine with this local form of boycott. Maybe because it comes from within?