Netanyahu is already painting the police recommendation to indict him as a political witch hunt. That will have significant consequences on how the attorney general proceeds, and what Israel’s second-longest serving prime minister does to survive. 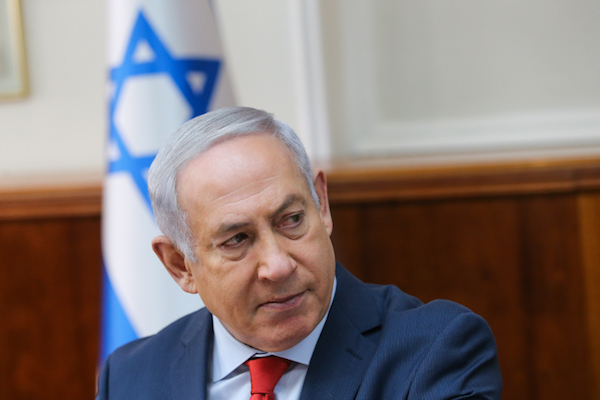 The Israeli police on Tuesday recommended indicting Prime Minister Benjamin Netanyahu in two corruption cases, referred to as Case 1000 and Case 2000. In Case 1000, Netanyahu is suspected of trying to advance the interests of Israeli tycoon Arnon Milchen in exchange for lavish gifts he and his wife demanded; in Case 2000, Netanyahu was recorded plotting to pursue regulatory changes that would have assisted the daily paper Yedioth Ahronoth in exchange for “indefinite” positive coverage, as promised by the paper’s publisher, Arnon Mozes. Netanyahu is suspected of receiving or being offered bribes in both cases.

Netanyahu doesn’t deny the facts, only the police’s interpretation of them. In a live message Tuesday evening, he tried to rally his base by claiming (as he has in the past) that he is the victim of politically motivated attacks. He also vowed not to resign. Tuesday’s big news – the involvement of Yair Lapid, Netanyahu’s main political rival, as a key witness for the prosecution in Case 1000 – assists Bibi in politicizing the discourse around the affair even further.

So what’s next for Bibi?

The decision whether to press charges lies in the hands of the Attorney General Avichai Mandelblit, who will likely take months to consider the evidence, maybe even a full year. Theoretically, Mandelblit could make up his mind much sooner, since the prosecution was involved in the police investigation from its inception, as it does in high profile cases – but this is unlikely for legal and political reasons alike.

If Mandelblit presses charges, the assumption is that Bibi’s coalition partners would resign, leading to early elections. But the common wisdom is that if Bibi senses an indictment coming he will call snap elections. Mandelblit won’t be able to announce his decision during a campaign – for fear of tipping the elections, and once Bibi wins, it will be politically difficult for the attorney general to press charges at all (if Netanyahu loses it won’t matter anyway). On the other hand, if the public pressure against Bibi intensifies, things might move faster.

Personally, I don’t see how Mandelblit can avoid pressing charges without it being seen as a cover-up. A decision not to indict would almost certainly be challenged in the High Court, and it could doom the attorney general’s own aspirations (to serve on the Supreme Court, like many of his predecessors). Lest we forget, Netanyahu is tied (though not a formal suspect yet) to a couple more investigations, much broader in scope – Case 3000, dealing with attempts to influence contracts for the purchase of submarines from Germany (Bibi’s most intimate proxies – attorneys Shimron and Molcho – are the key figures here), and Case 4000, involving regulatory changes in favor of the telecom giant Bezeq. It’s simply too much.

Mandelblit wants to avoid being seen as the man who took down a popular prime minister. He would much rather let the political process work, hoping that Bibi’s coalition falls apart or that he loses an election before he is forced to make a final decision about whether to indict. That way, Mandelblit would end up prosecuting Netanyahu as a private citizen. But judging from Netanyahu’s appearance yesterday, that scenario is unlikely: Bibi will do all he can to keep his coalition together for the time being.

The key for Netanyahu’s strategy is his popularity on the right. As long as he maintains high approval ratings among his base, none of his rivals from the right will come out against him, out of fear of political revenge from his supporters.

Which leads us to the broader implications of the recent developments: since Netanyahu’s survival now depends on his most loyal base, he is likely to move even further to the right politically – both with regards to the Israeli culture war, and on the Palestinian issue. These are going to be rocky years ahead.