Although it has been accused of anti-Semitism in the past, the Svoboda nationalist party’s newfound success has more to do with a growing number of people who are disillusioned by mainstream politics and disappointed by a sluggish economy, than with people harboring genuine hatred of Jews.

KIEV, UKRAINE – On Sunday, millions of Ukrainians cast their ballots in thousands of polling stations across the country in the parliamentary elections. Some did so in Eastern Ukraine, where a love for the Russian language and (often) a longing for them-good-ole-Soviet days still prevails. There, particularly in densely populated cities and towns, the ruling “Party of Regions” does particularly well. (It is those places which also report their results first, giving those that are strong there a slight public relations advantage when it comes to exit polls and preliminary results.) 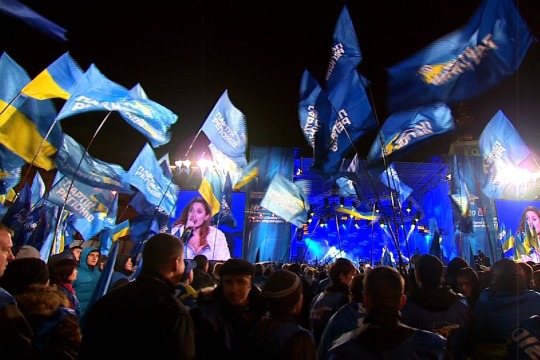 Some cast their ballots in Western Ukraine, where many do not speak Russian and stick to their national language, Ukrainian. It is there that many are frustrated with the government’s handling of affairs, its love of the Russian language, its closeness to Moscow, its growing distance from Brussels, and its general distaste – they would argue – for European ways.

It is in the Eastern part of Ukraine that those opposing the government of President Viktor Tymoshchenko – his own position not up for re-election until 2015, though his parliamentary party was – showed this lack of faith at the ballot box. They chose parties they know are unlikely to join forces with the ruling Party of Regions. One of those parties, the “United Opposition” is not actually a party, but rather an umbrella of eight different parties all united to defeat – or damage – the ruling party. The party’s leader, the former Prime Minister Yulia Tymoshchenko, is currently serving a seven-year prison term (ironically for a deal she signed with Russia), though she is still very much a figure in the elections. In her absence, the United Opposition rides off of her image, failing to harvest a strong personality as its leader. (The de facto leader is Artseniy Yatcheyuk. He is a former Foreign Minister, but when I met him, he came across a bit like an accountant.) 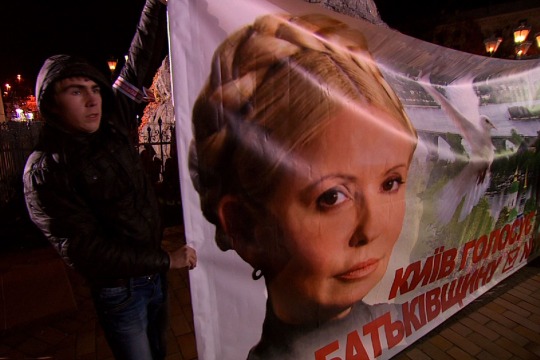 Among the other parties not included in the “United Opposition” are eighty or so small parties, most of which did not pass the 5 percent parliamentary threshold. But two of them are worth mentioning.  (As a sidebar, a third – the Communists – would be worth mentioning as well. However, they are not part of the opposition. They will join the ruling party to help solidify its majority.)

One is UDAR, or “punch,” lead by the World Boxing Champion Vitali Klitshchko. His party drew votes based on him and him alone, and it performed surprisingly well (though not as well as some had imagined it would). Klitshchko had indicated he would never join-up with the ruling government. His position is very pro-Europe. 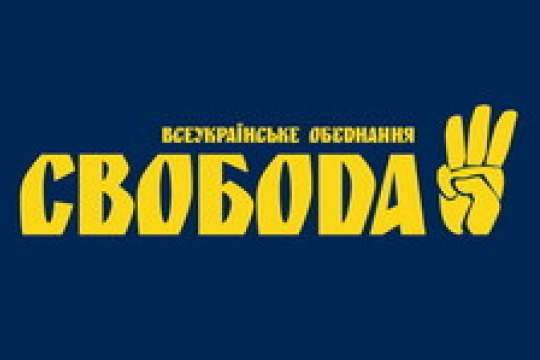 Ukrainian nationalist party “Svoboda” logo, reinvented in 2004. Prior to the new logo and new name, the logo resembled a swastika.

The second is Svoboda. A nationalist party, with it’s name meaning “freedom,” it has been dismissed by many, its supporters called far-right extremists. In 2004, Svoboda, which had been the National-Social Party of Ukraine, dropped the “socialist” part of its name so as to distance itself from Nazi associations. It immediately started doing better.  Its leader, Oleh Tyahnbyok, dimisses as name-calling accusations that Svoboda is an extremist party. In 2011, he told a Ukrainian newspaper:

In reality, countries like modern Japan and Israel are fully nationalistic states, but nobody accuses the Japanese of being extremists.

And its difficult to suggest that all of Svoboda’s supporters are extremists, either. As of 1530 GMT on Monday, the results – with 61 percent of the polls counted – showed that Svodoba was the smallest of the parties to make it into the parliament, with 9 percent of the vote. The Party of Regions secured 34 percent, the United Opposition had 23 percent, UDAR came in third with 15 percent, and the Communists followed with 13 percent. (You can view the latest results in Russian by clicking here.) 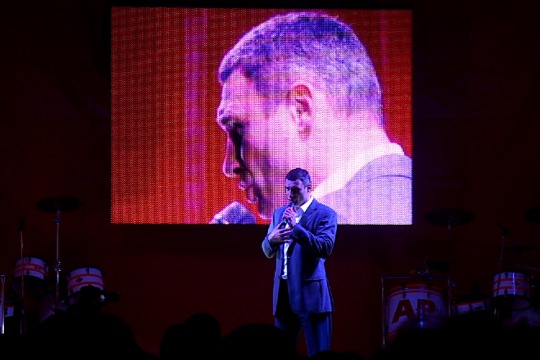 Suggestions of Svoboda’s future strength in parliament, based on these figures, are premature. Tyahnybok has been accused in the past of inciting anti-Semitism. But his party’s newfound success in, in all likeliness, has more to do with a growing number of people who a disillusioned by mainstream politics and politicians and disappointed by a sluggish economy, than it does with people harboring genuine anti-Semitic feelings. The numbers suggest a growing resentment of the political establishment and status quo, more than they show a rise in extremist ideology.

And even at 9 percent, Svoboda is unlikely to make much of a dent in a system that purports the ruling party. In order to understand why I say that, one needs to understand the parliament’s structure. The above percentages (which will change slightly once more voters are counted in the sparsely populated Western part of the country) account for only half of the Rada (Ukrainian parliament). The other half – 225 seats – are determined in first-past-the-post races in 225 single-mandate districts. Assuming Svoboda stays at 9 percent, it won’t necessarily get 9 percent of the seats in the parliament. Instead, it’ll get 9 percent of half of the seats in the parliament.

The reason Ukraine’s new parliament will be interesting to watch is because those single-mandate deputies can switch their support at any time. They have no specific party allegiance. Most are businessman who are popular in a specific district, and have something to gain – often, personally gain – by cozying up to the ruling party. For now, that means they will likely side on most issues with the Party of Regions. But if, in the near future, Tymoshchenko is released from prison (the European Court of Human Rights is reviewing her case and its decision could force the government to free), her re-entrance into parliament could signal her strong chances of becoming president in 2015, and those single-mandate deputies will find themselves switching alliances.

The system of Ukraine’s parliament, perhaps rather undemocratically, strengthens the larger parties at the expense of the smaller ones. So Svoboda’s influence will not be a large – or as linear – as some are suggesting.

For more on the voting and the results, watch below.