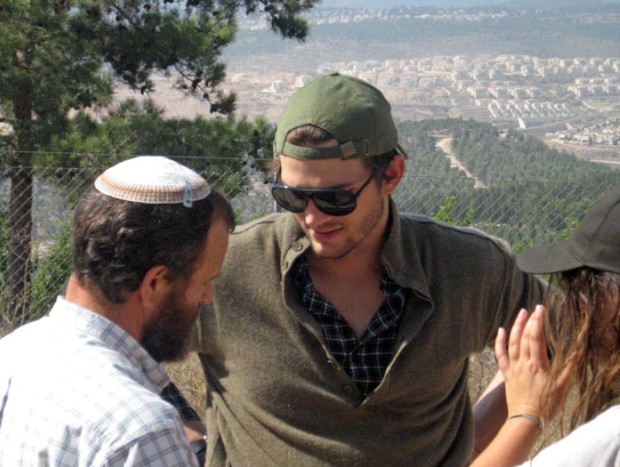 Ashton Kutcher on his visit to the settlement of Efrat (photo: OU)

More details on Ashton Kutcher’s visit(s) to the West Bank this week were published last week by the Israeli media.

Apparently Kutcher didn’t only visit Hebron and Jushua’s grave near Nablus on Sunday (Aug 8); he also stopped at Gush Etzion (south of Bethlehem), where he received a guided tour on the history of Jewish settlements in the region and had lunch.

According to a report by Maariv [Hebrew], The visit was initiated and organized by the Israeli branch of the American Orthodox Union (OU). OU Israel, which receives funds for its activities from the municipality of Gush Etzion settlements [Hebrew], was credited for the photos Maariv and Walla published of Kutcher’s visit to the settlements.

Journalist and culture critic Dafna Lustig, who called Kutcher “a jerk” on her twitter account following his West Bank visit, wrote today on Walla[Hebrew] that “Kutcher demonstrated acted in the most blind, ignorant and insensitive manner possible for a visitor to Israel.”

If we assume Ashton Kutcher knew the story of the city of Hebron before the visit, then, like many others, he must believe that the occupation is legitimate and therefore he does not have a problem taking this side of the political map… [But if] Kutcher thinks Hebron is a legitimate tourist attraction just because he is not familiar with its history, than his visit is far more infuriating: we’re not in Beverly Hills and our problems won’t be concealed with the help of Botox. It’s the duty of every person, and certainly one who is so famous, to know where he is going (…) and if he doesn’t know and didn’t bother to find out, than I stand behind what I wrote on Twitter: he is simply a jerk.