Israel plans to begin deporting tens of thousands of Eritrean and Sudanese asylum seekers in the coming months. Hundreds gather outside the President’s Residence in Jerusalem, hoping to tell him their stories.

Several hundred asylum seekers from Eritrea and Sudan demonstrated in front of Israeli President Rivlin’s official residence in Jerusalem Monday night, calling on him to stop planned mass deportations. The asylum seekers, including many women and children, were joined by dozens of Jewish Israelis, among them several Holocaust survivors.

The demonstrators chanted “we are refugees,” “refugees don’t deport refugees,” and “the deportations are a catastrophe—recognizing the refugees is the solution.” One elderly Jewish woman held a sign reading: “this Holocaust survivor remembers what it means to be Jewish and what it means to be an asylum seeker.” Many of the asylum seekers held up pictures of friends and family members who left Israel and were murdered, imprisoned, or tortured.

The Israeli government has said it plans to give asylum seekers from Sudan and Eritrea a stark choice in the coming months: accept deportation to Rwanda or Uganda, or go to prison indefinitely. Upon leaving Israel, however, asylum seekers are not being given legal status in either of those countries. Many are forced into another life-threatening journey, vulnerable to exploitation, humiliation, human trafficking, frequent arrests, demands for bribes, and violence. Testimonies of refugees who left Israel describe kidnapping gangs and even executions by ISIS. Many choose to risk their lives trying to reach Europe from Libya by boat.

On Monday night, it was impossible not to think of those who may lose their lives in the coming months. Who will be raped? Whose children will not have enough food? Who will drown in a desperate attempt to reach Europe and rebuild their life? It was hard to look into the eyes of the asylum seekers without tearing up from shame and fear of the fate that awaits them. 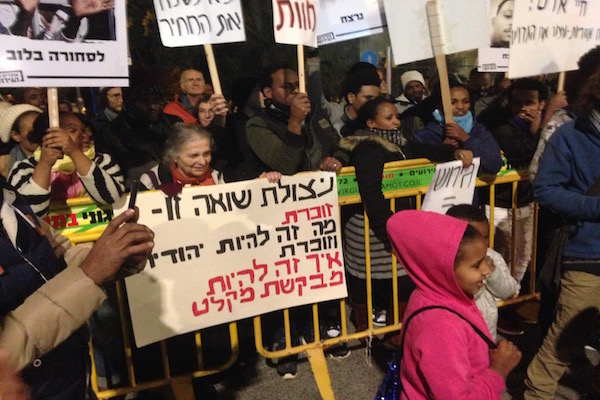 Throughout the protest, the asylum seekers called on President Rivlin to come outside and speak with them. “We’ve gathered here today to ask the president to come out and meet us, to look us in the eyes, to listen to us, to speak with us, and to find a solution,” one asylum seeker cried through a megaphone in the direction of the president’s residence. “The people here are on the brink of being deported. There are children here, and women here. Come and meet us.”

“The government is not checking our asylum requests and is sending us back to genocide. People who went to Rwanda and Uganda have disappeared. They’ve been murdered,” he continued. “Who will take responsibility for these people if not the president of the country? Honorable president, we are asking you to come and speak with us. Hope. Future. How does one build a future?”

One of the organizers of the protest, Brahe, called on the president to do the right thing befitting of an ethical state. “The Jews are a people that have experienced genocide,” he said. “If you are truly ethical, you will stop deporting us.”

“We are not infiltrators,” Brahe added, referring to the term that the Israeli government and media use to describe African asylum seekers. He described leaving Eritrea for Libya and spending three days in the Mediterranean Sea in an attempt to reach Italy before returning to Libya, where he was kidnapped. “I lost some of my close friends. I watched people have their organs removed in front of my eyes.” 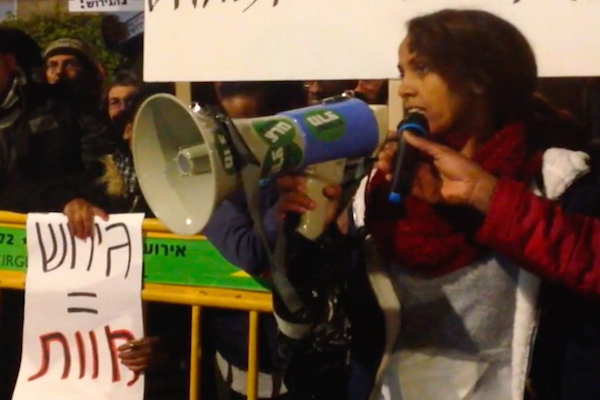 A female asylum seeker speaking at the protest outside Rivlin’s residence on January 22, 2018 (Joshua Leifer)

A female asylum seeker came forward and spoke shyly, in Hebrew, and with a trembling voice. “Mr. President, we are all afraid. We did not come here because we wanted to, but because we were in danger. We are not asking for citizenship. We are only asking for asylum, to stay until the situation in our country improves. No one wants to leave their country if the situation there is okay. We did not lack food or drink. What we lacked were rights, and we were in danger. So please, stop the deportations. Change [the government’s] decision.”

President Rivlin, who has proven in the past that he knows how to open his heart and, at the very least, to listen, remained in his official residence, behind the walls, metal barricades, and police.

Yael Marom is Just Vision’s public engagement manager in Israel and a co-editor of Local Call, where a version of this article was originally published in Hebrew. Joshua Leifer contributed to this report.