Although AIPAC activists regularly acknowledge that, of course, Israel is not perfect, it felt like the people there were cheering and stomping for a different country. 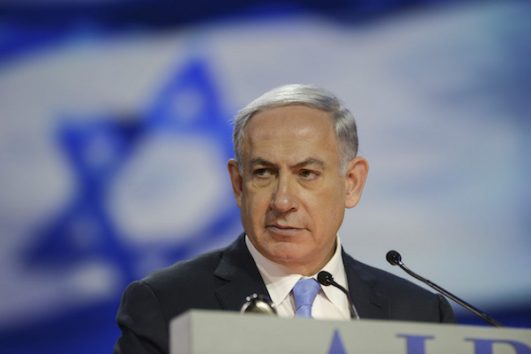 AIPAC’s annual policy conference ended on Tuesday to thunderous applause for Israeli Prime Minister Netanyahu. For three days, the conference was a seamless marriage of the highest level technology and meticulous organization. Organizers successfully shuttled 18,000 people, according to the staff, from hotels in Washington, DC to three sprawling buildings of the convention center and helped them circulate within the labyrinthine structure. An “agenda builder” phone app was used to register for events. The number and impeccable training of the perennially cheerful staff reminded me of the dazzling Olympic opening ceremony I attended in Sydney in 2000.

If there were glitches, I didn’t see them. When anti-occupation demonstrators marched to the main entrance to the Convention Center on Sunday, conference-goers were swiftly rerouted to the nearby Marriot hotel, where they connected to the convention center through a plush-carpeted corridor. Inside, the ecosystem swallowed up any further distractions. In one cavernous room called the “AIPAC Village,” a wall-sized electronic mural displayed an idyllic, brightly colored village scene that looked suspiciously like the Jaffa Gate entrance to the Old City.

The “Village” contained a thicket of app kiosks, booths showcasing Israeli innovation and social welfare organizations, a cafeteria, and TED-like stage platforms for speaker sessions. Lest anyone harbor lingering discomfort from the political protest outside, the entire affair was defended not only by DC police for blocks around, but by an actual Iron Dome installation towering over delighted onlookers at the center of the village. A model of the Iron Dome at the AIPAC conference, 2018. (Dahlia Scheindlin)

It was easy to feel disintegrated; it was a conference about everything. The app subject search included 15 different topics related to Israel and the US. Under just one of them, “Israel and the World,” 23 different breakout sessions were offered over two days. With dozens of events happening simultaneously, two attendees could have completely different experiences.

One could attend sessions with Justice Minister Ayelet Shaked and Education Minister Naftali Bennett from the far-right  Jewish Home party which is part of the governing coalition, or one of the numerous events addressing core AIPAC themes: fighting BDS and anti-Semitism (often used synonymously), how the Christian-Jewish alliance has succeeded in passing anti-BDS legislation in the US, and AIPAC’s legislative agenda in general. Iran and Israel’s foreign relations featured prominently.

It was also possible to build what might be called a cautious liberal agenda as well, if one chose sessions with MKs from Meretz, Yesh Atid and Labor. Labor Party leader Avi Gabbay and opposition leader Isaac Herzog both spoke at plenary sessions. In a panel on Palestinian politics, Avi Issacharoff, the creator of the hit series Fauda, Grant Rumley, from the conservative Foundation for the Defense of Democracies, and Sarah Yerkes from the Carnegie Endowment for International Peace gave a frank analysis of the crumbling leadership of Mahmous Abbas, the emergency-level humanitarian situation in Gaza and Israel’s partial responsibility for the situation. My own session questioned the fundamental tension of a Jewish and democratic state, with former MK (Yesh Atid) Dov Lipman and the columnist Shmuel Rosner; we had some measured disagreement. One young audience member asked about the “elephant in the room” of Israel’s changing demographics when considering the Palestinian population.

Yet another notable theme was a conscious focus on diverse American political constituencies. Featured speakers represented Hispanic Americans, Asian Americans, African Americans, US veterans, LGBTQ communities, millennials in general. There were sessions on the environment, innovation, feminism, and a talk with Israeli culinary writer Gil Hovav. Creating consensus on the ground

In the plenary sessions, everything changed. There, the cacophony of topics, people and activities gave way to a sweeping sense of unity. In a hall stretching the length of what felt like a football field, thousands of people sat silently in the dark; speakers looked tiny on the stage, and their faces were projected with gleaming precision onto giant screens lined up like a ribbon over the length of the rectangular hall.

The glowing screens in the darkened room forced a single-minded focus; ovations broke out in unison for the stream of political figures who appeared in quick succession. The star-line up included Senators Marco Rubio and Mitch McConnell, Robert Menendez and Chuck Schumer, along with numerous Representatives, women and men from both parties. The Prime Minister of Albania and the President of Guatemala paid their respects. The most thunderous applause went to UN Ambassador Nikki Haley; as she spoke the woman next to me texted on her phone: “Haley rocks, she should be President someday.” Vice President Mike Pence fared nearly as well, except for a charming “pro-life” blooper.

And despite the almost hourly escalation of his corruption investigations, Benjamin Netanyahu received the greatest roars and the lengthiest standing ovations of all. Bibi is the maestro of crowd orchestration. He raised his hands and the audience laughed, cheered and rose. He grew somber and 18,000 (give or take) went silent.

In these plenary events, the sprawling range of subject matter was gone. A rigid set of issues defined the presentations, with certain themes receiving the same thrilled response every single time.

The Iranian threat was at the top of the list; every single speaker who voiced opposition to the Iran nuclear deal got an ovation. Speakers who even remarked on the existential threat Iran poses got one too.

Ending UN bias against Israel was ubiquitous. Nikki Haley got her strongest plaudits for taking on the UN; Mr. Pence got his audience excited by recognizing Haley’s work on bucking the UN.

Every mention of the US recognizing Jerusalem as the capital of Israel garnered applause. Anticipating the embassy move elicited waves of applause. Citing the projected date for opening the new embassy – May 14 of this year – received standing ovations. Guatemalan President Jimmy Morales got the same response for announcing that Guatemala would move its embassy a few days later (Guatemala recognized Jerusalem as capital shortly after Trump’s announcement in December).

BDS was a favorite target and it was not a nuanced conversation. Chuck Schumer thundered about exposing the truth of anti-semitism to get his applause, so loud it drowned out the end of his sentence.

Peace made an appearance. This year AIPAC notably took an open position in favor of two states and these moments elicited applause too, from specific corners of the vast room. But invariably, the longing for peace was immediately followed by accusations against Mahmoud Abbas for incitement, and the topic generally ended there.

The US-Israel relationship was a regular crowd pleaser, with a focus on bi-partisan political support and defense spending, (though oddly, the name “Trump” was only rarely mentioned). The theme of Israel’s military prowess echoed throughout the plenaries and in general, from the Iron Dome installation to an older man’s kippa embroidered with the Hebrew letters “I.D.F.” in gold thread.

Israeli innovation and technology was described with wonder and awe, none more so than in the Prime Minister’s speech. For Netanyahu, the sale of Israeli tech start-ups, developments in Israeli cyber-security and artificial intelligence, water and agricultural technology together made Israel out as no less than a global savior: “Israel is literally driving the world.”

But Netanyahu’s speech does not need to be parsed separately; in fact, he just collected the short list of plenary themes and tied them all together, serving up the AIPAC consensus like a gift to the audience.

And here lies strange feeling that arises from such mass adulation. Although AIPAC activists regularly acknowledge that, of course, Israel is not perfect, it felt like the people were cheering and stomping for a different country. In the spotless hall, bathed in the velvety blue light of the high-definition screens, I suspected that most of the audience viewed Israel through the beautiful photos on the walls: gleaming labs, earnest and smiling soldiers, agricultural drip systems with the sunset in the distance. Or maybe Israel for them, on some subconscious level, is the AIPAC conference itself: all clean, cutting-edge technology, eager young ushers providing seamless order in the happy buzz of families and friends, reveling under the huge electronic projection of a painting of a village.

I wonder for a moment if I’m the problem – always looking for flaws and failings, “sour-faced” as Netanyahu delighted in calling the Israeli opposition last fall.  Does being progressive mean we always have to look at the brothels of south Tel Aviv with women trafficked from Eastern Europe, one in three Israeli children – largely Haredim and Arabs – who live in poverty, the inches-wide alleys between cracking buildings of Balata refugee camp, and the deep cracks in Israeli democracy?

The answer for me is that over 20 years of living in Israel, I have often thought that home is where you care enough to name problems and work to fix them. I left AIPAC aware of what hadn’t been said, and even more committed to addressing those problems – perhaps for me, that was its success.