At Hebrew University, the narratives in Arabic and Hebrew language textbooks glorify Zionism and blur out any sign of the occupation. The next step? Using force against Palestinian students who dare to protest that very narrative.

Israeli Independence Day is also Palestinian Nakba Day. This is one of those days that is charged with memories, pain, political views, identities, etc. The very choice of name for this day reveals one’s culture, identity and distinct political standing. And language is a front no less important (or violent) than other fronts.

According to the late French-Algerian scholar Mohammed Arkoun, it is the interaction between language, history and thought which constructs the world around us. The interaction between thought and history creates language, language and thought are at the core of history, and history and language create thought. Language is important also because it is a tool of enforcement, control and repression in the Foucauldian sense of the word. The study of language is therefore an important tool at the hands of states and their institutions, to enhance their involvement and control. It allows for the instillment of certain contents and narratives, which gradually acquire a “normal” and “neutral” image in one’s consciousness. As time goes by, this consciousness brings about actions to which language serves as key and motive. It is therefore important to examine the way in which language is taught. A critical comparative reading of textbooks for the teaching of Hebrew and Arabic at the Hebrew University would grant us a deeper understanding of what goes on within the academic consciousness in Israel. 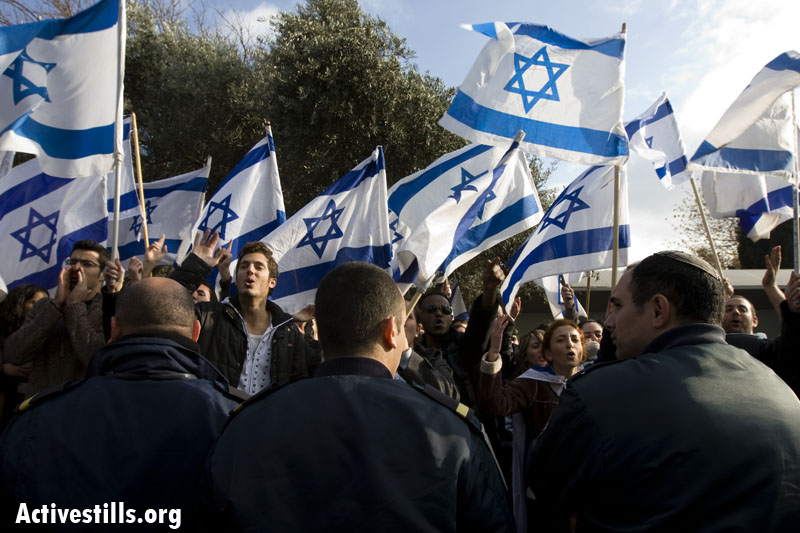 A short glimpse of the Hebrew language textbooks suffices for an understanding of their position within the Zionist discourse, as well as the university’s perception – a perception which is an inseparable part of the ideological conflict and the Zionist colonial discourse. Through the contents of the books, the university serves as a Zionist missionary for students of the Hebrew language – and at the Hebrew University these are primarily Arabs from East Jerusalem who did not learn Hebrew in school. Alongside this, the Arabic language textbook destroys the Palestinian narrative for the students – be it through the denial of this narrative, through a choice to ignore it altogether or through rendering it crazy. Everything is done gradually: at the beginners’ level, only a small portion of the content is related to Zionism, lauding it. In the advanced textbooks, however, nearly all of the content is based on the very core of Zionist thought. For example, the narrative which is manifested in “Kmo Kelim Shluvim” (“Like Communicating Vessels”), an advanced Hebrew language textbook by Varda Yishai and Amitai Bar Kol, is so demonstrably Zionist that one cannot help wondering whether it is a Hebrew language textbook or a political science textbook.

A random skimming of the headlines suffices: “Why live in Israel in spite of everything?”; “Who is an Israeli?”; “Israeli Judaism”; “Who is a Jew?”; “Letters from David Ben Gurion”; “What are Judaism and Humanism?”; “The Bus 300 affair”; “Joseph and his Brothers”; and “Islam’s View of Politics, Religion and State.” The content carries a Zionist orientation on the political, sociological economic and theological level, which bear an almost one to one resemblance to Shelach lessons in schools (Shela”ch is a Hebrew acronym for a department in the Ministry of Education aimed at instilling a Zionist perspective in youths, primarily through field trips).

In contrast, those who learn the Arabic language do not enjoy analogous knowledge. On the contrary, the contents of Arabic language textbooks at the Hebrew University are, as a rule, shallow and negative. For example, part A of “Elements of Literary Arabic” by Tikvah Hasson, presents numerous excerpts from Arabic newspapers such as A-Dustur, A-Thawra, Al-Quds, A-Rai and others, circulated in Egypt, Jordan, Yemen, Kuwait, etc. These excerpts amount to no more than letters exchanged between family members, along with out-of-touch articles showing how swell everything is supposed to be and how happy everyone is. For example, one of the articles cites Hassan Barakat, a man from Hebron “whose father is conservative and whose mother is Bedouin. He’s not working but he’s happy with his life.” In another excerpt, a letter written by Bassam Anton to his father is cited, in which he tells his father how beautiful life in Jerusalem is, describing the streets and the holy sites. Not a single word about the daily riots at the entrance to those holy sites, or Israeli brutality on the streets.

In the second part of “Elements of Literary Arabic,” one finds an article titled “Arrest extended for suspects in document forgery of land purchase in the West Bank.” The strange thing about this is that the court tried those who had attempted to forge and steal Palestinian land, and the police had even appointed an investigative team which was supposed to come up with recommendations (how often does this happen in real life?!). However, the book contains no reference to the occupation, the settlements, settler violence against Palestinians whose lives have become hell, or the policy of uprooting Palestinians from their land.

Another article’s headline is “Ramallah residents report to head of Knesset: We want a Palestinian state so that we can live in peace.” Where was this article taken from? It’s not clear. Furthermore, it is not clear how the residents of Ramallah reported anything to the head of the Knesset (it is probably about the Speaker of the Knesset, but we don’t even know his/her name). The content is detached from any context, distorted and mistaken. Government policy is always portrayed as humane and caring, the government always lends a helping hand to everyone and Palestinians live in peace and happiness. “Honorary ceremony for outstanding students in Beit Sahour”; “Registration begins at the Islamic University”; “Discussions on cooperation between A-Najah University and Milwaukee University”; a university of which I have never heard of; maybe it is the University of Wisconsin–Milwaukee. Thus, the name of the university in the Arabic text is incorrect, which means that this text is a translated version and not an original one.

At the same time, articles on novelists, poets, organizations, opinions, the current situation, the conflict, the Nakba, historical narratives, Palestinian contributions to Arabic culture or Arabic cultural contributions to human knowledge and history are nowhere to be found. All this is not important as far as the authors of these textbooks are concerned. Language is not being taught for cultural purposes, only for political and security-oriented ones – anything which transcends this discourse is insignificant. All this serves to belittle the Arabic language, while rendering shallow Palestinian reality.

A clear cut separation between academic discourse and the dominant discourse of the society and the state is hard to bring about. However, academia has both a certain space and freedom of expression outside the dominant discourse. And yet, it seems that the Israeli academia has relinquished its measure of freedom. If Hebrew U is truly intent on giving precedence to knowledge over ideology, it must change its policy in the field of Hebrew and Arabic language.

In addition, one should note that the Israeli Ministry of Education has recently decided, as part of the attempt to belittle the Arabic language, to cancel Arabic grammar studies for students in the Arabic schools. The key to reading and comprehending classical texts, as well as to understanding the logic of the language, depends on grammar. All this is apparently not important in the eyes of the ministry. The implementation of this decision serves to bolster the distorted image of the Arabic language as vacuous and superficial in the eyes of Arab students themselves (Hebrew grammar is important, of course, and has therefore remained in the curriculum). 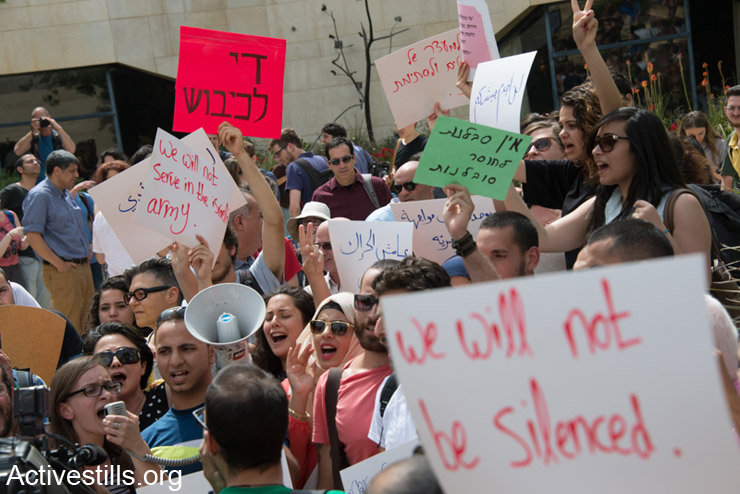 Hebrew University students and faculty hold a demonstration in solidarity with Palestinian Christian citizens of Israel who were recently sent “voluntary draft” notices encouraging them to enlist in the Israeli military, East Jerusalem, May 7, 2014. Though army service will remain voluntary for non-Jewish Israelis, the move is seen as an attempt to drive a wedge between Palestinian Christian and Muslim citizens of Israel.

One final note: On Tuesday, April 29th, the university called in the police, the Border Police and undercover security disguised as protesters because of a demo held by around 20 Arab students who were protesting the enlistment of Palestinian Christians into the IDF. The university claimed that the protest was illegal, and the police arrested three students. During that demonstration and another one held on the following day, the protesters were beaten by university security personnel. It is embarrassing to see the university functioning as one of the violent state forces – calling the police to disperse a demonstration by its own students, sending security personnel to beat them and turning the university into a scene of violence. It is embarrassing to see the university embody Israeli law, one for Jews and another for Arabs. The university could have chosen a more beneficial path by ending the policy of banning various Arab student groups, as well as the policy of suspending their activity. It could have granted permits to demonstrate in the first place, instead of turning down requests under various pretexts and excuses.

Had the university acted in this vein, perhaps students would not have formed an “illegal gathering.” But the silencing has led to growing frustration. For some reason, the Hebrew University does not regard any of this as problematic. It also fails to regard the belittling of the Arabic language and the superficialization of its usage in its textbooks as an embarrassment. The university simply complements the struggle for consciousness by the use of violence. And when the struggle for consciousness is impossible, it calls in the police. Thus, the university is revealed to be another one of the security arms, rather than a sphere in which knowledge is created and conveyed.

Fadi Asleh is an MA student of comparative literature at the Hebrew University. This article was first published in Hebrew on Haokets.