A new holiday was established by the binational, bilingual school kids at Neve Shalom Wahat al-Salam. We painted, cooked, built puppets and celebrated. Only the roar of aircraft on their way to Gaza brought a small reminder of reality. 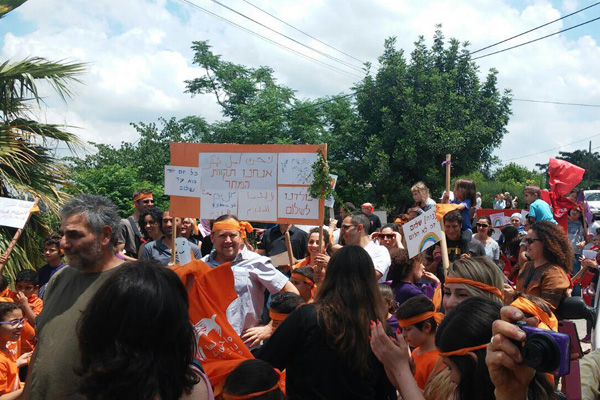 Please mark down May 7, 2016 as the first “Peace Holiday” – a new addition to the already crowded calendar of the binational, bilingual school of Wahat al-Salam – Neve Shalom. It is in the proximity of Holocaust Remembrance Day, Nakba Day, Independence Day, Land Day, Passover, Easter, Mimouna, Asraia and al-Miarg’. With grief and bereavement rituals, religious celebrations and festivals all around, we struggled to find a single date that was free of the baggage of ethnic and religious divisions that fuel the long-standing national conflict.

The “Peace Holiday” is an initiative launched by small children – Jews and Palestinians – following a democratic vote in their student council. The holiday is intended for parents and families of the school in the village of Wahat al-Salam – Neve Shalom as well as for the general public. Actually, it is for every human being who is simply tired of war.

Preparations for the event lasted several months. We had to make fateful decisions that would determine the future relations between the Arab and Jewish peoples, Israelis and Palestinians, that would affect the situation in the Middle East and, of course, influence world peace. For example: should we invite US President Obama? The Pope? What about the Dalai Lama? Should we send an invitation to President Rivlin? And should we write a letter to world leaders asking them to make peace? No less important, we had to decide what we would sing and what kind of food each class would bring. 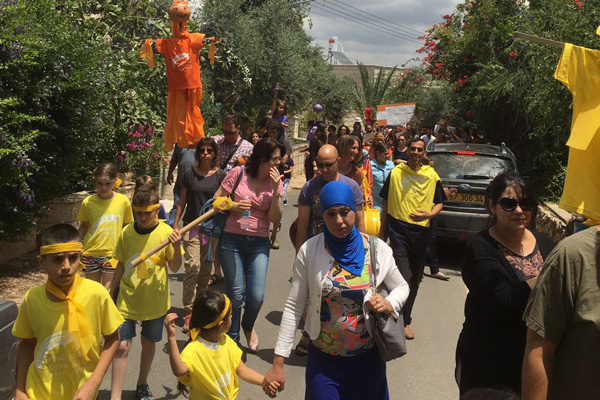 My third-grader Adam and I decided to bake a chocolate cake with a colorful rainbow made of sweets, though such an item was not included among the suggestions we were given, and it wasn’t particularly healthy. But naturally, on a holiday, we can permit ourselves to indulge in sweets more than on ordinary days – so we strayed a little from the suggestion list.

Each class was assigned a different rainbow color, in which it was supposed to make banners, flags and a “Man of Peace” mascot character. The third grade’s orange seemed very nice but, in the process of preparing our character, we couldn’t decide whether it would be a boy or a girl. So, we gave it a boyish hairstyle but then attached a long braid for the satisfaction of the girls in the class. “The boys won’t like this! “, I warned these enthusiastic girls. We don’t want a gender war on a peace day! And sweet Hagar, who had toiled hard to prepare the braid, said with complete sincerity, “the boys will deal with it.” She passed my first feminist empowerment test. “What fun,” I said to myself: this proves that the feminist struggle and the struggle for peace are intertwined like the orange braid. There is no way to separate between one kind of oppression and another, I thought to myself. But before I could pursue my reflections on struggle, oppression of minorities, violence and incitement I was stopped by my son Adam. Evidently feeling the boys’ sacrifice, and a little annoyed by my heedless laughing with the girls in his class, he pulled hard to win me back. “Mom, I wrote a chant for the parade: “One people or two – we want to be in peace.”

“That’s great,” I marveled, rejoining him. And, having won his mom back, he calmed down. 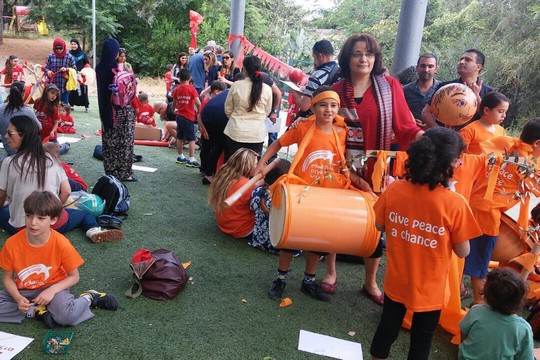 Finally on Saturday, the colorful parade took to the village streets. Actually, every day of the week is like the Sabbath here. Apart from the barking of the neighbors’ dogs, few sounds are heard. So a bit of rumpus was a pleasant change. The colorful parade of wagons, flags and unaccountable smiles that flew in all directions was joined by foreign guests who were staying at the hotel, and representatives of friends organizations from around the world who have been supporting this tremendous educational project for many years. Everyone was happy, and they all marched forward in a spirit of brotherhood.

Between the attack of Beitar Jerusalem soccer fans and the bombing of Gaza, I met Nadwa, the school’s first grade homeroom teacher. Nadwa was attacked, the other day, as she was leaving Jerusalem’s Malha shopping mall, by a crowd of Beitar fans just after their team’s loss to Sakhnin. They spat on her, beat up her vehicle with clubs, breaking the mirrors and shouting “Arab terrorist.” This mother of two toddlers and a little girl in first grade, suffered 15 minutes of terror, while her car was surrounded by a belligerent and bloodthirsty mob. Nadwa told me the fans threatened, “We’ll claim you were driving like a maniac.” After blocking the vehicle for a long time, Nadwa says they yelled at her, tried to pull her out of the car and climbed up on it. Eventually, she reversed, hit the car that was blocking her, and fled for her life.

“You know, if someone had a gun he would have shot me without any difficulty,” she said. “They would have said that I’d wanted to run over Jews. Believe me, it would have gone over in the Israeli media. I thank God I’m alive – though I’m pretty traumatized.” I hugged her and said I was glad she’s okay and back at the school – and that what we are doing is the healthiest response to racism and the violence of the Beitar fans. “There’s nothing to be done – you have to move on,” I said. Nadwa nodded.

And I thought: “Is there really nothing to be done?” I looked around and found dozens of smiling families and color. Everyone had left the sofa in their air-conditioned living room, their trips to the countryside or family visits, to come and spend their free day here, with families of the neighboring people. We spoke Hebrew or Arabic; we were dressed differently, maybe, and for sure we hadn’t prepared the same foods.

All of us could hear up above the roar of aircraft on their way to attack Gaza. Together we checked the updates on our smart phones and talked, on this naive Peace Holiday of ours, about the future of this place, about this government that needed a war in order to survive yet another summer of bloodshed.

The Peace festival didn’t stop the shelling in Gaza. It didn’t stop the Color Red rocket warnings, the crazed Beitar fans or the crazy right-wing ministers. It didn’t stop the occupation or the neutralizing of Palestinians from their lives. Our march of colors did not re-color the blackness or the hate rampaging outside, in Israeli society. But one springlike Saturday, full of light and sunshine, we enjoyed a few hours of sanity and joy. Actually, believe it or not, these were hours of peace. Happy Peace Holiday to all!