Tens of thousands crowded Tel Aviv’s Rabin Square on Saturday to show solidarity for asylum seekers facing deportation. ‘If we let the deportation happen, the Jewish people will have a stain on its history forever.’ 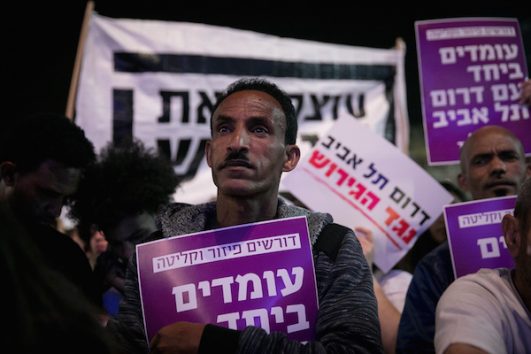 It was an unusually hazy night in Tel Aviv. The lights from the stage caught the dust in long, yellow beams. Banners bearing slogans like “standing together against the deportations” rippled gently in the slight wind. Some 25,000 people were gathered in Rabin Square in central Tel Aviv to protest Israel’s plan to deport tens of thousands of African asylum seekers.

The words of Monim Haroon, a Sudanese asylum seeker and activist, echoed across the hushed crowed. “We thought that the state of Israel would understand us better than everyone else, but the Israeli government doesn’t want us here. The government calls us ‘infiltrators,’ puts us in jail, throws us out on the streets, pushes us into poverty, calls us ‘a cancer.’” 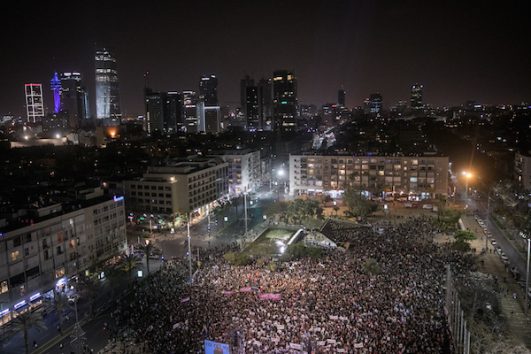 Throughout her speech, Keshet, a life-long resident of the south Tel Aviv neighborhood of Neve Sha’anan, linked the asylum seekers’ struggle against the deportation to the struggle of south Tel Aviv’s poor and mostly Mizrahi residents against the ongoing gentrification of the area.

The need to pair an end to Israel’s deportation plan with the revitalization of south Tel Aviv has been a central part of the public campaign against the deportation — an attempt to show that the left is serious about correcting its historic blindness to the oppression that Jews of Middle Eastern and North African descent face.

Many of the speakers at the rally on Saturday night connected the refugees’ struggle to the Mizrahi struggle, and to the struggles of other marginalized groups.

“This is not new to me — I am not surprised,” Reuven Abergel, a founder of the Israeli Black Panthers, told the crowd. “I came here to send a message to the government and to support the refugees, to tell them that they are not alone.”

Avi Yallo, an Ethiopian-Israeli community leader, described his feeling of solidarity with the Eritrean and Sudanese refugees, who, like the Ethiopian Jews, experienced anti-black racism and even violence in Israel. Yallo recalled the mass protests of three years ago, when the Ethiopian Jewish community rallied in Rabin Square against police brutality, which Israeli police suppressed — firing tear gas, water cannons, and stun grenades at the crowd.

Veronica Cohen, a Holocaust survivor, gave a moving speech about the moral urgency of stopping the deportations. “The deportations have not given me any rest,” she said. “It has burned in my bones. It has demanded that I shout in every place — you will not do this, you will not deport people in my name!”

“I used to ask myself, what would I do if I were in the position of the ‘righteous among the nations,’” Cohen continued. “If we let the deportation happen, the Jewish people will have a stain on its history forever.” 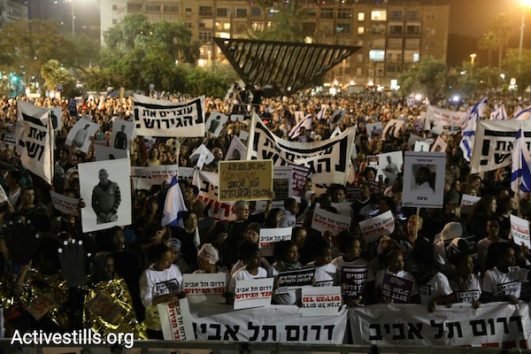 Asylum seekers and Israelis protest against the deportations in Rabin Square. March 25, 2018. (Activestills.org)

In the square, built to hold crowds of a much bigger size, the rally almost felt small. The energy of last month’s demonstration — when 20,000 people stood packed shoulder-to-shoulder in the streets of south Tel Aviv, dropped massive banners out of apartment windows, and scaled construction sites to dance on scaffolds — seemed to have dissipated. And though the crowd periodically broke into chants — such as ‘No deportation,” and “human rights for everyone” — the general atmosphere was cautious and subdued. The packed speakers’ lineup did not leave much time for the kind of collective singing and chanting that raises spirits and unifies crowds. Even from the middle of the square, the stage for the speakers and musicians felt far away.

Additionally, following a court ruling that desertion from the Eritrean army may serve as a basis for refugee status, the deputy attorney general reportedly instructed Israel’s Population and Immigration Authority to reexamine the cases of Eritreans currently head in Saharonim Prison whose asylum applications were denied. Up until now, Israel has rejected the vast majority of Eritrea asylum seekers’ requests for refugee status. Whereas in Europe, 91.4 percent of Eritreans are recognized as refugees, Israel has granted refugee status to just 11 Eritreans and one Sudanese man. There are roughly 38,000 asylum seekers, mostly from Eritrea and Sudan, living in Israel today.

The rally on Saturday night could therefore harness neither the joy of victory nor the rage of defeat. It was a tentative gathering against the backdrop of an ever-shifting legal struggle and the general instability of Israeli politics: the impending indictment or non-indictment of the prime minister, the lingering threat of early elections, and the heating-up of tensions along the Gaza border that often accompanies the arrival of warmer weather.

By 10:30 p.m., Rabin Square was more than half empty. The remaining speakers and performers took the stage before a diminishing crowd. Perhaps those who went home early are saving their strength to continue the fight. If the past is any indication, they will need to.