The courts cleared the way for deportation of South Sudanese on Thursday, giving them a week to leave voluntarily – but only three days later, authorities have already begun rounding up people. 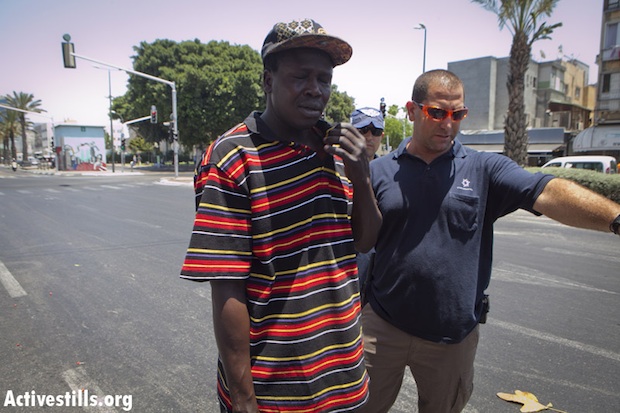 Update: Haaretz reported on Monday that mass arrests of African asylum seekers and immigrants continued in Eilat and central Israel. Immigration authorities said that 55 Africans had been arrested, among them 45 South Sudanese nationals. Refugees reported that children were among those detained, but this has not been independently verified.

Eight refugees from South Sudan were detained on Sunday, marking the first step in the deportation of asylum seekers. 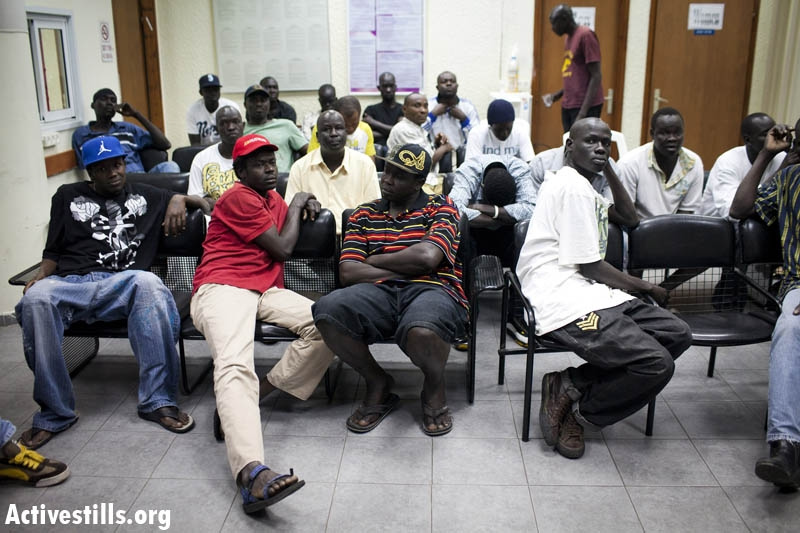 African immigrants and asylum seekers in a holding center in Holon on Monday (photo: Oren Ziv/Activestills)

On Thursday, the Jerusalem Administrative Court ruled against a petition filed by human rights groups aimed at preventing the expulsion of South Sudanese, which was set to begin on April 1. After the court cleared the way for deportation, the Population and Immigration Authority announced that South Sudanese would have a week to leave Israel on their own. 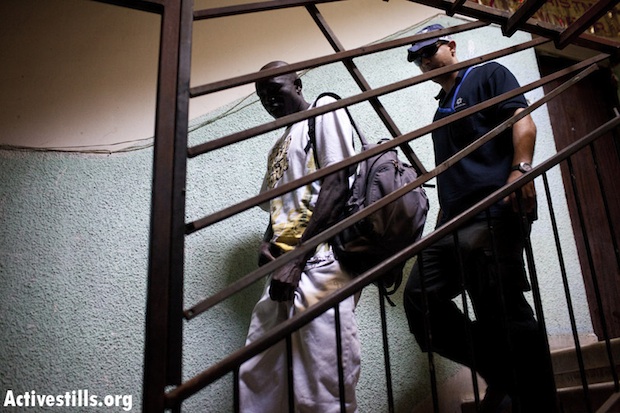 Gabriel Kuol, 29, is one of the South Sudanese facing deportation. Kuol joined the Sudan People’s Liberation Army (SPLA) when he was just 16 years old after his parents were killed in the civil war.

Explaining his decision to enlist at such a young age, Kuol says, “I didn’t have any options.”

He adds that his family was “a military family.” His uncle, John Garang, was the leader of the SPLA.

Two years into his army service, Kuol was captured by North Sudanese forces. He was beaten and tortured at a prison in Khartoum. In 2004, he managed to escape to Egypt.

According to Kuol and other asylum seekers, refugees were sometimes attacked on the street in Egypt. “I have friends who were killed by Egyptians,” Kuol says. And so, in 2007, he came to Israel.

[I thought] no one would ever talk about my skin here in Israel—that was the expectation many southern Sudanese had. We expected [acceptance] because we know that this country is [made up of] refugees.

And it’s formed of many nationalities including black people so we were sure that we would not be at risk of racism… now we [are] being hunted in the street.

In the wake of south Tel Aviv’s recent race riots, Kuol says, the old feelings of fear, anxiety, and insecurity—that anything could happen at any time, that he could be attacked or even murdered on the street—have returned. “I feel vulnerable,” he says. “I feel like I’m in North Sudan and Egypt.”

A number of violent incidents have occurred since the race riots. Amine Zegata, an Eritrean refugee who owns a bar that was vandalized the night of the riots, was physically assaulted twice while he cleaned his business. The window he installed to replace the one smashed by Jewish Israelis has already been cracked.

Sigal Rozen of the Hotline for Migrant Workers says that  asylum seekers come to her organization every day to complain of attacks or threats made by Jewish Israelis.

Rozen also recounts meeting a refugee in a south Tel Aviv park last week. The man took his shirt off to show her fresh stitches on his stomach. Rozen recalls, “He said, ‘this is what they did to me in HaTikva neighbourhood.’”

Kuol is scared by the prospect of being attacked. He is also frightened about returning to South Sudan. There have been skirmishes along the border with North Sudan; the north has bombed the south; and Kuol is certain that the 2005 peace treaty will not hold. War between the two states is on the horizon.

Kuol feels that he is in particular danger for being a vocal critic of the “Arab, Muslim” north. His family’s role in the SPLA and his own military service could also make him a target. “And, in South Sudan, the security situation is not stable,” he says.

He is also worried about the fate of the 700-1500 South Sudanese who are facing deportation from Israel. “[They] won’t have anywhere to live. You can choose to sleep under a tree. But, if you do that, you still have to worry about food.”

Kuol is particularly concerned about the children “who were born here. This is their home now; they don’t know anything about South Sudan.”

He adds that he knows several of the men who were detained today.

Kuol says that he is having a hard time absorbing the news of his imminent deportation. “It’s too much for a human being to sit down and think about it, too much even to believe what’s happening.” He looks around his apartment, he adds, and he doesn’t know what to do. Should he pack?

One thing is certain. Kuol is not going back to South Sudan on his own accord.

While we are talking in a Jerusalem cafe, approximately 300 African asylum seekers are gathering in south Tel Aviv’s Levinsky Park and marching to the United Nations’ Tel Aviv offices. They hold signs that read “Human, not cancer,” in reference to Knesset Member Miri Regev’s remark that Africans are “cancer in our body.” 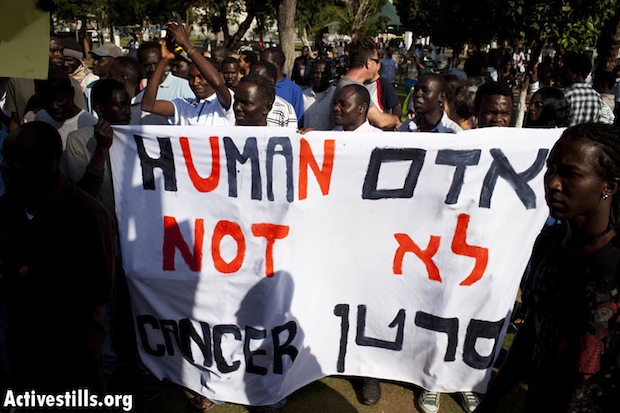 Their signs also call on the country not to forget its history and demand social justice for both the residents of south Tel Aviv and the refugees alike.

When asked why he isn’t attending the march, Kuol answers, “The Israelis will do whatever they can to get rid of us. Protests will not help.”

Kuol is angered by the media’s and Israeli government’s depiction of the refugees. He repeats the list of names both use: infiltrators, illegals.

“Why would someone call me that?” he asks, pointing out that he has a state-issued visa in his pocket.

He is disappointed that Israel has forgotten the deportations the Jewish people faced under the Nazi regime and says he doesn’t understand why the South Sudanese, a small community, have been singled out for expulsion.

I don’t have the heart to tell Kuol that the South Sudanese haven’t been singled out; that, if the state has its way, all African refugees will be deported.