Israel moved the residents to the plot of land they lives on today. Decades later, the state wants to displace them again — to build a Jewish town on the ruins of their homes. 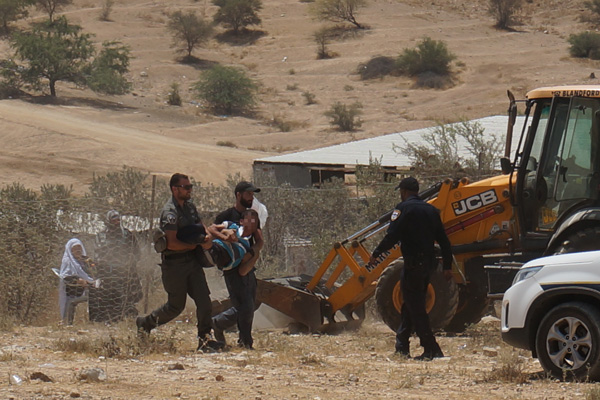 Among the detainees were youths from the village, and former Rabbis for Human Rights president Rabbi Arik Ascherman. All of the detainees were released late Sunday night. Another woman was hospitalized for injuries she sustained from police.

Police arrived with a tractor and several surveyors to the village on Sunday in order to start building a fence adjacent to the Bedouin villagers’ homes, presumably in order to begin construction of the Jewish town meant to replace them.

Umm el-Hiran is one of dozens of so-called “unrecognized villages,” in which approximately 100,000 Bedouin citizens of Israel live without electricity, water, and other basic services the state refuses to provide. 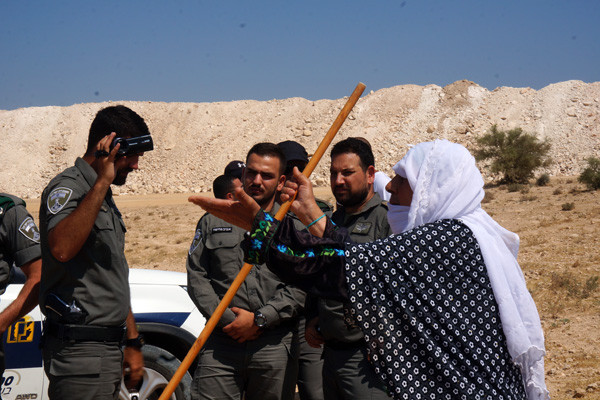 An elderly Bedouin woman from the unrecognized village of Umm el-Hiran argues with Israeli police officers as construction crews prepare to fence in the village’s homes, July 31, 2016. (Negev Coexistence Forum for Civil Equality)

Here is a quick summary of this history of Umm el-Hiran: Long before the establishment of the State of Israel, members of the Abu Qi’an family lived in an area called Khirbet Zubaleh.

Last year Israel’s High Court of Justice ruled that the state can change its mind and take back the land it gave to the al-Qi’an family. In place of their current village, Umm el-Hiran, from which they are to be expelled, a new township for religious Jews will be established.

“The government has no problem with Jewish citizens living on this property – so why should they have a problem with us?” Raed Abu al-Qi’an, a resident and activist from the village, told +972 last year. “They allow rural communities to be built for Jews across the Negev – why not us?”

Noam Rotem contributed to this report.