In Israel, a settler’s pre-1948 property claim provides legal grounds for the takeover of private Palestinian land. The property deeds of scores of Palestinians are disregarded, because there is one set of laws for Jews and another for Palestinians. Separate and unequal. 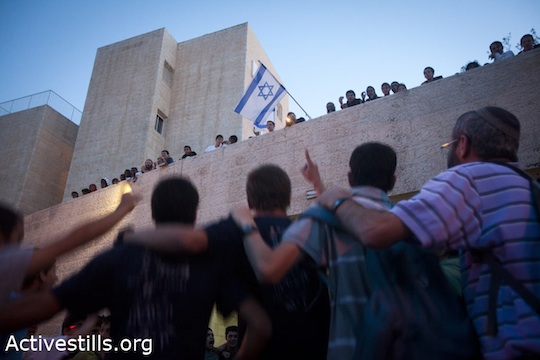 Jewish settlers dance during a ceremony inaugurating a new Jewish settlement in Ras al-Amud in May, 2011. (Photo: Oren Ziv/ Activestills.org)

Last month, as last minute wrangling over the Democratic Party platform offered Americans a front-row seat to the farce that often accompanies discourse about Jerusalem, events in the holy city reached their own new level of absurdity, though with far more serious and immediate consequences.

Early on Sunday, September 2, Jewish settlers took over a single room in a Palestinian house in the East Jerusalem neighborhood of Ras al-Amud. Backed by the decisions of Israeli courts, and protected by both the Jerusalem police and the Modi’in Ezrahi, a government-subsidized private security force that guards Jewish settlements in East Jerusalem, the settlers seized the property and began to lay the groundwork for the eventual expansion of the adjacent Ma’ale Zeitim settlement. Like other East Jerusalem settlements, Ma’ale Zeitim, the biggest of its kind within a Palestinian neighborhood in East Jerusalem, is largely funded by American billionaire Irving Moskowitz.

The settlers’ claim to the room was based on alleged Jewish ownership of the property before 1948. The Israeli court system – regarded internationally as a bulwark against Israel’s increasingly conservative legislative and executive branches – held this claim as sufficient justification for the settlers to take over private Palestinian property and erect a barbed wire fence down the middle of the family’s yard.

There is no denying the fact that there were Jews who lived and possessed property in East Jerusalem before 1948. Just as there were, of course, thousands of Palestinians whose homes were located inside what is now Israel, and who today possess deeds to those lands. Yet the idea of a Palestinian family getting permission from Israeli courts and protection from the Jerusalem police while they “reclaim” a house in West Jerusalem is unthinkable, for a single reason: in Jerusalem, and in the Israeli legal system, there is one set of laws for Jews and another for Palestinians. Separate and unequal.

For many Palestinians and some Israeli activists, the partial takeover in Ras al-Amud was reminiscent of another series of evictions that took place in 2009 in the East Jerusalem neighborhood of Sheikh Jarrah. There, too, Jewish settlers wielding documents from Israeli courts and guarded by police expelled a number of Palestinian families from their homes. One of these families was forced to vacate part of its home so that Jewish settlers could move in.

The story of that takeover, and of the ensuing nonviolent struggle of Palestinian residents and Israeli activists against such evictions is told in My Neighborhood, a new short documentary currently premiering in cities around the United States. It is a story both of human suffering and of Palestinian and Israeli efforts to oppose political injustice and racism in Jerusalem, backed by the highest echelons of Israeli politics.

The grassroots efforts highlighted in the film continue in different forms and locations, but the situation in Jerusalem is growing increasingly dire. A few weeks before the takeover in Ras al-Amud, a 17-year -old Palestinian boy named Jamal Julani was almost beaten to death by a group of Jewish youths in downtown Jerusalem, while chanting “Death to Arabs” as a crowd of hundreds watched without intervening. Following the attack, Jerusalem mayor Nir Barkat joined a chorus of Israeli politicians clucking their tongues at the violence and calling for coexistence. Such words cannot but ring hollow when less than two weeks later, the same Israeli politicians give their blessing to continued ethnic displacement of Palestinians in Jerusalem, and Mayor Barakat sends his police officers to protect another group of extremist Jews as they take over part of a home in the middle of yet another Palestinian neighborhood.

The mob attack against Julani was widely condemned, easily brushed aside, neatly glazed over. But this attack was not an aberration. And as indicated by additional instances of racially-motivated beatings of Palestinians in Jerusalem in recent weeks, it is unlikely to be the last of its kind. If such racist and discriminatory practices are acceptable for Jerusalem’s and Israel’s policymakers, who can truly be surprised when a gang of youth follow suit?

Moriel Rothman is an American-Israeli writer and activist. He is based in Jerusalem and is active with the Solidarity Movement.