Months after it was unseated from power, it is unlikely that the Muslim Brotherhood will defeat the military in their current standoff. To end the conflict, both sides will need to move toward a power-sharing solution. 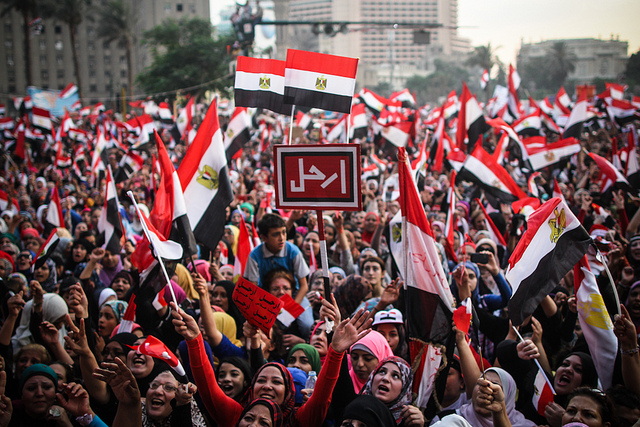 From Cairo to Damascus, Middle Eastern politicians and populaces are keeping a watchful eye on the fate of Egypt’s Muslim Brotherhood. Last month saw a decisive development in the soap opera world that is Egyptian political life. A court judgement declaring that Egypt’s first democratically elected group is now officially banned.

But what does this mean for the behemoth Brotherhood? The reality is that the Muslim Brotherhood faces a future on the precipice of destruction. Yet their fate is inextricably linked with the success or failure of Egypt’s fledgling democracy.

To understand what options lie ahead for the Brotherhood is to unravel the current barriers in the way of a lasting solution for both Egypt and the Brotherhood, the only organization which has embodied the political Islamist project for the past century. We consistently hear that the Islamist project is not compatible with democracy, but Egypt’s Islamists are not going to fade away easily; so unless a solution is found to include them in the political process, then further instability is all but ensured.

Before moving forward, three overriding caveats must first be established: firstly, the Brotherhood is not a monolithic organisation; secondly, a zero-sum game pitting Islamists against the state similar to what has taken place in Algeria – and which to a lesser extent is currently enveloping Syria – needs to be seen as a dystopian impossibility for the Egyptian crisis; finally, there must be recognition that there exists a third column in Egyptian society, which is supportive of neither the military coup nor the Brotherhood’s disastrous year of governance. It is this final component that holds the key to providing the necessary environment to begin a process of national reconciliation.

However, to bring the Muslim Brotherhood in from the cold seems insurmountable at present. Last month’s massacre outside Cairo’s Rabaa al-Adaweya mosque has poisoned the Brotherhood movement, which now stubbornly refuses to renege on its demands. The most vitriolic of these is the insistence on reinstating the ousted Brotherhood President Muhammad Morsi. With over 1,000 Brotherhood deaths last month, a military court proceeding with criminal charges against Morsi and the imprisonment of the majority of the Brotherhood’s senior leadership; reconciliation with Egypt’s military dominated interim government appears impossible.

Compounding this resurgent army is a public nostalgia for all things military. Egyptians are weary of persistent protests, which only seem to worsen an already faltering economy. It is against such a backdrop that General Sisi’s reinvention as a modern day Nasser has gained significant traction among a population yearning for stability. To many this seems only possible with the strongman politics so familiar to recent Egyptian history.

However, all is not lost. Egypt is not Syria, and it is certainly not like Algeria in 1992, where conflict between the Islamic Salvation Front and the military regime descended into a decade-long civil war. In order to find a way out of this current impasse, we need to look beyond these barriers. Firstly, the Brotherhood is not a monolithic movement with one central ideology. It’s true that the organisation is renowned for its hierarchical structure, where power resides with the old guard who run the Guidance Council. Mohammad Morsi was a member of this old conservative guard, but it’s essential to look beyond this center of Brotherhood power in order to understand the entire movement. In terms of ideological standing the Brotherhood encompasses various strands of Islamist thought.

Now, with the majority of the conservative wing either dead, imprisoned or in exile, there is a window of opportunity for pragmatic, younger Islamists who might be starting to recognize that making concessions is the only way out of the current stalemate.

The Brotherhood has a long history of double edged politics. Ever since they were allowed back into the fold following Anwar Sadat’s decision to use them to counter leftist threats to his power in the early 1970s, the Brotherhood has repeatedly shown that pragmatic decision-making, rather than ideological consistency, takes precedence at every turn.  It was the younger, reformist wing that advocated changes in the Brotherhood policy platform over the past decade. This is especially true on issues relating to citizenship rights, gender equality and relations with the West.

Nevertheless, the greatest obstacle to Brotherhood participation lies not only in the internal dynamics of the 80-year-old organization, but in the Egyptian public’s willingness to forgive their Islamist compatriots. The movement proved in its year of power that it cannot be trusted. Morsi’s constitutional power grab, a record of repressive tendencies toward media personalities and of most consequence, the way in which Morsi dealt with leading liberal and leftist opposition figures, such as Muhamed ElBaradei and Hamdeen Sabahi. Both men tried to engage in dialogue with Morsi in the month preceding the mass street protests on June 30 that ousted the Brotherhood leader. In both cases, Morsi was dismissive of the opposition, seeing the Brotherhood’s electoral victory as a mandate for Islamist hegemony without any concessions.

However, Egypt’s Brotherhood may still have currency among certain social groups. After all, it was the Muslim Brotherhood that provided essential social services to many of Egypt’s poor. The void created by the erosion of essential services in healthcare and education over the past 30 years was filled by the Brotherhood’s private voluntary Islamic organisations. Without these, the plight of Egypt’s poor would worsen considerably. This renege on basic services lies at the heart of the revolution that ousted the seemingly unmoveable Hosni Mubarak.

With Egypt’s Islamists backed into a corner, they yet may find a surprising ally in the young revolutionaries who were the cornerstone to those momentous events that occurred in Tahrir Square in 2011. An interesting development in Egypt is the establishment of the Third Square movement. Consisting of leftists, liberals and reformist Islamists, they include the influential revolutionary youth group, the April 6 Youth Movement, the Islamist Strong Egypt Party, and surprisingly, the Salafi Al Nour Party. The latter turned on its Islamist brethern in the Brotherhood in an act of political maneuvring reminiscent of the fratricidal history of the Marxist movements over a century ago. Though, of particular interest here is the position of revolutionary youth groups. Their power to mobilise large numbers of Egyptian youth into the streets has proven time and again that large sections of the populace are unwilling to allow old regime figures, who embody Mubarak’s stable autocracy, to return to power unchallenged.

For now, the military backed interim government has benefitted from a Brotherhood leadership incapable of admitting its failures over the past year. Yet, old regime habits die hard. Promises to anti-Morsi supporters of an early presidential election have yet to surface. Most worryingly, though, is an interim constitution, which was supposedly written by civil powers in government but calls for incorporating the Armed Forces budget as a single, whole figure in the constitution. This is indicative of the insidious nature of Egypt’s military finding a backdoor back into power.

These moves represent a return of old habits, but the regime’s inability to reform, failure to deal with Egypt’s economic crisis and a heavy handed response to the Brotherhood could usher in further street protests. Violence on the streets on Cairo, Alexandria and Sinai has become a common occurrence since the 2011 revolution and is likely to stay. Even with all of its organizational might, the Brotherhood is unlikely to defeat the military in their current standoff. That said, the military cannot continue to demonize the Brotherhood as terrorists, incapable of playing politics. Both sides may be pushed into a compromise by a young populace eager for democratic stability. This requires concessions on both sides of the political divide – from embittered Brotherhood stalwarts, to reluctant revolutionaries and opportunistic generals, the challenge lies in reframing the state towards a power sharing solution.

Key to this will be recognition by the Brotherhood of certain red lines, such as the separation of powers between the executive and legislature, which would restrict Islamist hegemonic aspirations and to prevent sectarian strife. For the military, concessions on budgetary spending, constitutional power and electoral independence are essential if this roadmap to stability has a realistic chance. Without these insurances, a protracted process of street violence will engulf Egypt. These are stark decisions for both the military and the Brotherhood, but with a population weary of both stakeholders, a radical reconfiguration of state-society relations is the only option available.

Gillian Kennedy is a PhD candidate in Middle Eastern Studies at King’s College London. Her PhD examines counter-hegemonic strategies within the Egyptian Islamist movement from Egypt’s independence from colonial rule up until the demise of Mubarak’s regime.

Read more:
The Egyptian people rise up and overthrow Morsi – or was it the army..?
The Cairo massacre and winner-takes-all politics