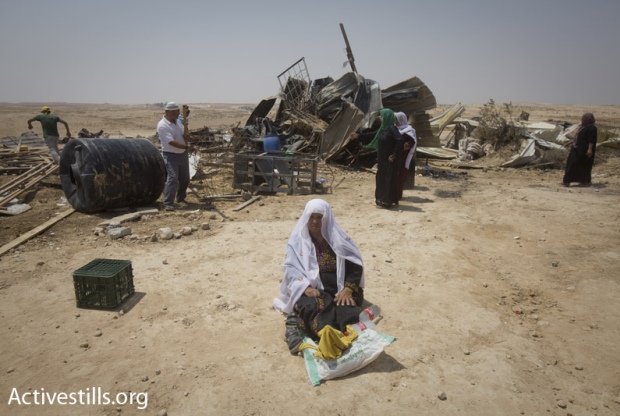 The Bedouin village al-Arakib, in the northern Negev, was destroyed again today. Hundreds of policemen blocked the access to the village, removed the residents from the temporary homes they constructed, and razed the place with bulldozers.

Al-Arakib was destroyed for the first time last week, only to be rebuilt later by residents and volunteers in the following days. According to news site Ynet, 10 temporary structures were constructed in al-Arakib in the past week. They were all destroyed today.

Arab Knesset member Taleb El-Sana (Raam-Taal) fainted after being removed by force from one of the homes. He was evacuated to a hospital in nearby Beersheba.

“The black-clad special unit forces are the true face of (Foreign Minister Avigdor) Lieberman’s democracy. This operation is the first step in the uprooting of many villages. We shall return to our villages, build our homes and not leave this place”.

Israeli police announced that it will sue the village for the cost of its evacuation. the cost of last week’s operation alone was estimated at 2 million Shekels (500,000 USD).

The village of al-Arakib stands near the place of the historical al-Arakiv, which was built around the turn of the 19th century, when most of the Bedouin population of the Negev (Israel’s southern desert) abandoned nomadic life and settled in small villages. In this post [Hebrew] you can see the ruins of the old al-Arakib, which like many other Arab settlements, was destroyed between 1948 and 1951. Since then, the people of al-Arakib have been trying to regain access to their lands.

One of the comments to my previous post on al-Arakib referred to the fact that the Bedouin settlement was declared illegal in Israeli court, and this is the reason for its evacuation. I have a couple of points concerning this matter:

(a) The Israeli government is applying its laws in a very selective way. Just a few weeks ago, the government decided to back a law that would recognize the Jewish farms that were built illegally in the Negev during the last decade. At the same time, the state would not recognize more then 40 Bedouin villages, who are sitting on the same land for decades – many of them before the state was born. The state also refuses to evacuate the West Bank’s Jewish outposts that Israel itself views as illegal (not to be confused with the vast majority of so-called “legal” settlements). So the logic here is very simple: in all regions of “disputed” land, Jews are encouraged to settle and grab as much land as they can, while Arabs are being pushed away.

(b) Regarding the rule of law itself: Israel has introduced in the 50’s a whole set of laws that would make it impossible for many none Jews to have legal claim for lands, even if it was recognized as their own before the state of Israel was born. Any person who didn’t have legal documentation of his land and/or was temporarily displaced in the war of 1948 and the years to follow lost his rights to the land. This is part of what made the people of al-Arakib “invaders” to their own home. So it’s not only a question of government policy: the entire legal system on the issue of land ownership distorted and discriminating.

For further reading, I recommend this excellent post by Eyal Niv, explaining how Israel is pushing the Bedouin population from their lands.