On Monday, January 9, Israeli authorities shut down “the only road leading to Khan al Ahmar elementary school,” the Palestinian news agency WAFA reports. The move came a day after Israel issued a number of stop-work orders in Umm al Kheir. 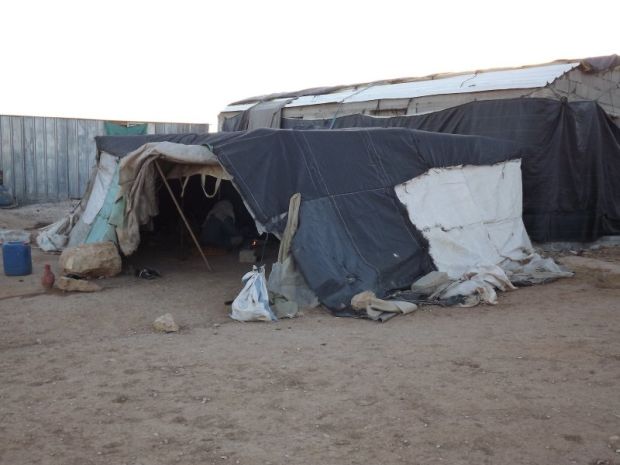 Israeli authortities blocked the road leading to Khan al Ahmar’s school on Monday with massive cement blocks and a high fence in order to keep children from reaching it. According to WAFA, the Palestinian Ministry of Education “condemned the closure.”

Khan al Ahmar’s residents are refugees from the 1948 war. In the past, the children from the village went to United Nations Relief and Work Agency for Palestinian Refugees (UNRWA) schools in Jerusalem. But the separation barrier brought an end to that. Because of extreme difficulties reaching other schools within the West Bank, parents began keeping their kids at home.

A number of local and European NGOs built Khan al Ahmar’s elementary school out of rubber tires and mud. It opened in 2009.

According to Operation Dove, an organization that works closely with Palestinian residents of the South Hebron Hills, Israeli authorities delivered stop work orders to residents of Umm al Kheir on Sunday, January 8. The orders will affect eight structures in the village.

In the morning the Israeli Civil Administration, escorted by an Israeli army jeep, entered the Palestinian village of Umm Al Kheir. After examining different buildings, the officers registered the identity of the owners of eight structures and then issued stop work orders… The deadline to appeal to Israeli High Court is set for January 22. In case of failure of any appeal, the stop work orders will be followed by demolition orders.

The [residents] of Umm Al Kheir said that 12 more structures in the village are under demolition orders (eight of which are [homes]) for a total of 20 structures. That means that most of the village risks to be eliminated in the [near] future.

Two of the families received stop work orders for houses they are building to replace those that Israel demolished in September 2011.

Umm al Kheir was founded by Bedouin refugees from the Negev who were displaced during the 1948 war. The village is adjacent to the illegal Israeli settlement of Karmel, which was established in the early 1980s and which the state hopes to continue to expand.

Israel has demolished a number of structures, including homes, in Umm Al Kheir and other West Bank villages under the pretense that they lack Israeli-issued permits. Speaking to +972, the UN Displacement Working Group reports that Israeli forces destroyed 580 Palestinian-owned structures in the West Bank in 2011. Two hundred of these buildings were residential and 1006 people were displaced.

The UN group also said that between January 1 and January 9 of 2012, Israeli authorities demolished 16 Palestinian-owned structures in the West Bank, including 3 houses.

The demolitions reflect Israeli plans to expand settlements and deepen Israeli control of the West Bank. Peace Now reports that 2011 saw a 20 percent rise in Israeli settlement construction. In October 2011, Israel announced its plans to expel some 27,000 Bedouin from Area C. According to B’Tselem,

In the first phase, planned as early as January 2012, some 20 communities, comprising 2,300 persons, will be forcibly transferred to a site near the Abu Dis refuse dump, east of Jerusalem… In the second phase, the CA plans to expel communities from the Jordan Valley. One option being considered is building a new permanent town for these communities next to a-Nabi Musa, west of Jericho.”

Israel’s plans to relocate West Bank Bedouin echoes the Prawer Plan, which will see Israel relocate some 30,000 Bedouin citizens of Israel from their villages in the Negev to impoverished townships.

A version of this post was first published at the Alternative Information Center.