Atir is hardly the first case in which forestation has been used by the Israeli government and the JNF as a method of displacement and land grabbing against Palestinians — on both sides of the Green Line. “Apparently in Israeli democracy, the state is permitted to uproot Arabs from their homes and plant trees in their place.” At first glance, Ali Abu Al-Qi’an’s comment would appear to be a joke or an exaggerated statement – but it is neither. In one sentence, Ali, an Arab Bedouin citizen of Israel, summarized the grim fate of his village of Atir, located in the Naqab (Negev).

The case of Atir is intricately tied with that of its neighboring twin village, Umm al-Hiran. In 1956, the Israeli military government moved the Bedouin Abu Al-Qi’an tribe to their current location, which is registered by Israel as state land, after their forced displacement from their original homes of Khirbet Zubaleh in 1948.

Decades later, in 2002, the state announced plans to retake the lands and evict the residents again, for blatantly discriminatory purposes. While Umm al-Hiran will be demolished to build a Jewish town over its ruins, Atir is to be destroyed in order to expand the man-made forest of “Yatir,” which is sponsored by the Jewish National Fund (JNF). Atir’s 500 residents, like Umm al-Hiran’s residents, will be relocated to the government-planned township of Hura. 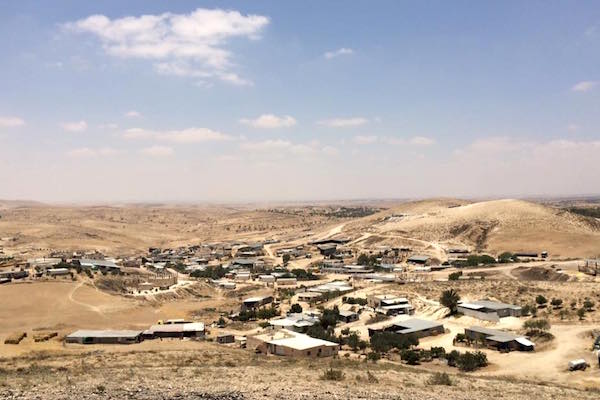 In a 2-1 ruling last month, the Israeli High Court acknowledged that the Bedouin residents were not on the lands illegally, as the state had claimed. However, the Court nevertheless approved the state’s ‘right’ to carry out its agenda. Justices Rubinstein and Hendel argued that the plan for the land was “sufficiently important to justify the alleged harms involved in its achievement.” In other words, they had no objections to violating the Bedouins’ rights in order for Jewish citizens and the Jewish National Fund to benefit in their stead.

“We went to the courts seeking justice, but the judges only gave a rubber stamp to the state’s plans,” said Ali. “They admitted that we were allowed on this land, and yet they still saw us as zo’ran (‘troublemakers’).” With a chuckle, he added, “I suppose that somehow makes us ‘licensed troublemakers’.”

Justice Rubinstein added in the ruling that the state’s offer to move the Bedouin villagers to Hura served as ample compensation for the residents to leave their villages. But this has been strongly refuted by the villagers, their attorneys, and the Hura Municipality. “We have an expert opinion showing that not only are the Hura neighborhoods unready to absorb the villagers, but the municipality is dealing with a housing crisis and other social problems among the residents already living there,” said Adalah Attorney Myssana Morany, one of the lawyers representing the village. “Even so, regardless of any offers the state makes, it is still legally and morally absurd to remove hundreds of men, women and children from their homes just to replace them with a forest and Jewish town. It is racist and discriminatory at its core.” The JNF-sponsored “Yatir Forest” on a hill nearby to the village of Atir. (Photo by Amjad Iraqi)

Atir is hardly the first case in which forestation has been used by Israel and the JNF as a method of displacement and land grabbing against Palestinians on both sides of the Green Line. In addition to designating areas as “state lands” like in the Naqab and the occupied Jordan Valley, the policy is also facilitated by the Land Ordinance of 1943, a law dating to the British colonial mandate, which allows the state to confiscate and use lands for “public purposes.”

The results of this policy have included the establishment of ‘Ambassadors Forest’ and ‘God-TV Forest’ over the lands of Al-Araqib in the Naqab; ‘Ramot Menashe Park’ over Lajoun in the Triangle; ‘South Africa Forest’ over Lubya in the Galilee; and ‘Canada Park’ over Imwas, Yalo and Beit Nouba outside Jerusalem, among many others. As historian Ilan Pappe described, “wherever almond and fig trees, olive groves or clusters of cactus are found, there once stood a Palestinian village: still blossoming afresh each year, these trees are all that remain.”

Ali retains hope that Atir can prevent this fate, believing that public action and attention can help pressure the government and courts to reconsider their decision. But he recognized that the problem was much deeper than his own village’s struggle, emphasizing that the state continued to view the native Arabs as people that did not belong to the land, regardless of their citizenship. “We have Israeli IDs, we work, we respect the law, but this means little to the state. Instead they tell us that a plant brought over from Europe has more rights than a non-Jew who was born and raised here.” Scanning over the village, he shook his head and said: “This is our so-called ‘democracy’.”