The court’s ruling that the rights of Alsira’s villagers’ take precedence over the state’s agenda for their land, inadvertently implies what should have already been an established fact: the deliberate hostility toward the unrecognized village is simply wrong.

May 1 was a good day for the families of the Arab Bedouin village of Alsira. After eight years of legal proceedings, the Be’er Sheva District Court dismissed the state’s appeal aiming overturn a lower court’s 2011 decision to cancel 51 demolition orders against the village, which is home to 350 Bedouin citizens of Israel. This means that the demolition orders remain officially cancelled, and the residents will remain in their homes and ancestral lands in the Naqab/Negev.

The court’s decision, which is a major legal precedent, represents an important historical lesson on the reality of human rights in the Negev. Since 1948, Israeli law and policy has been unjust in its treatment of “unrecognized” Bedouin villages. In refusing to recognize the Bedouins’ historical rights, the state was able to disregard the Bedouins’ land claims, squeeze Bedouin townships through discriminatory planning, forcibly remove entire communities from their homes, and deny basic services such as water, electricity and other infrastructure. 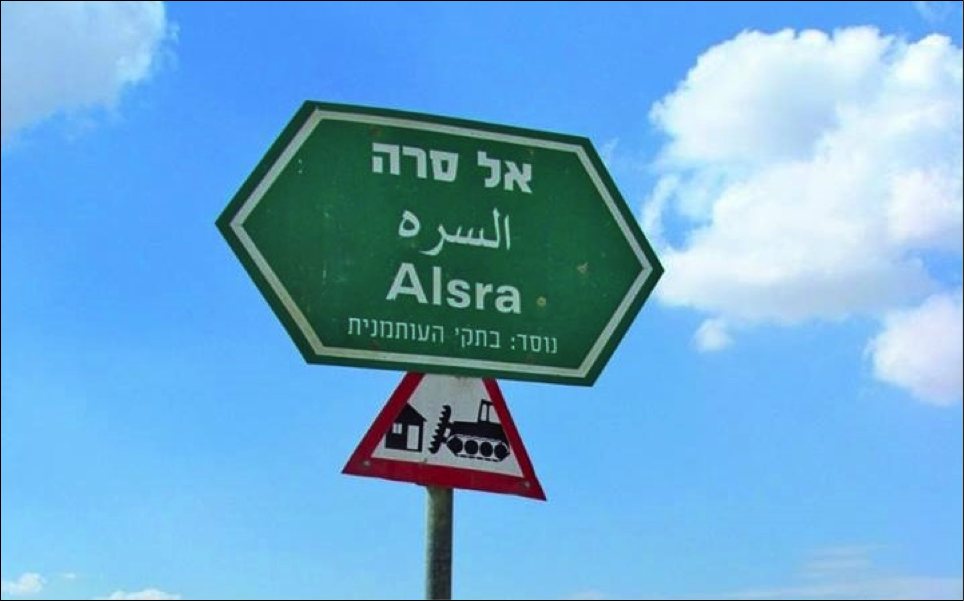 The signpost to the Arab Bedouin village of Alsira in the Naqab/Negev, warning of home demolitions. (photo courtesy of Adalah)

For over 60 years, Alsira was made to endure these policies, and the government’s threats of forced displacement, for no reason other than the state’s dislike of their presence in the Negev due to their Arab Bedouin identity. Though that accusation is stern, it stands in full truth when the state willingly facilitated the growth of Jewish communities in the Negev, while deliberately withholding the same support from Bedouin communities that had existed long before. Even recently-recognized Bedouin villages continue to be treated no differently than unrecognized ones, as Bir Hadaj and others show.

Alsira’s success is therefore a major stepping stone for the unrecognized villages. The court’s ruling that the residents’ rights take precedence over the state’s vague agenda for the land inadvertently implies what should have already been an unquestionable fact: the state’s hostility and negligence of Alsira – a deliberate policy since 1948 – was wrong. Though the justice of the villagers’ cause has finally been recognized, it has come over 60 years too late, and at a high cost to generations of the village’s residents. Nonetheless, at a time when many Bedouin citizens are losing faith in Israeli law’s capacity to defend their rights, Alsira’s success rekindles hope of correcting the state’s discriminatory abuse of its powers.

This lesson is particularly important as attention now turns towards the twin villages of Atir and Umm al-Hiran, whose cases have been pending before the courts for over ten years. The villages, home to 1,000 Bedouin residents, starkly illustrate the state’s priorities for the Negev. The residents of Atir are to be evicted and their lands used to grow trees for the JNF-sponsored ‘Yatir’ Forest; and Umm al-Hiran is to be destroyed in order to build a new town for Jewish citizens called ‘Hiran’ over its ruins. These plans are to be carried out despite the fact the state admitted that the Bedouin residents were not trespassers on the land. However, the state claimed before the Supreme Court that the plans were meant for the “general public” and not for Bedouins – as if Bedouins were not members of that public – and that because the lands were “state lands,” Israel could legally use them as it pleased.

The two villages offer the next test to demonstrate whether the lessons of Alsira will be heeded by the Israeli courts and the Israeli government. Will the state be allowed to forcefully remove Arabs from their land just in order to give them to Jews? Does a man-made forest have superior rights to a Bedouin community? Does the state’s “legal” abuse of its powers make those laws just? An unfavorable decision for the villages would reveal how easily the human rights of Arab citizens can be suspended in order to meet the state’s discriminatory goals.

The cases of Alsira, Atir and Umm al-Hiran come at a critical time as the government intensifies home demolitions in the Negev, despite the freezing of the Prawer Plan Bill in December 2013 (see here, here, here and here for examples of demolitions). It is therefore essential that attention continue to be drawn to the injustices being perpetrated in Israel’s south. The state is obligated to put the needs of its citizens first, and without discrimination based on their Jewish or non-Jewish identity. The situation in the Negev is complex, but the right to live as human beings with dignity and respect is not. Hopefully, Alsira’s success in achieving that right will not be the exception.

Amjad Iraqi is a Projects & Advocacy Coordinator at Adalah – The Legal Center for Arab Minority Rights in Israel. Adalah has represented the villagers of Alsira before the Israeli courts since 2006.

Related:
PHOTOS: A life of discrimination for Negev Bedouin
The historical truth about Bedouin expulsion from the Negev
Cabinet OK’s razing Bedouin towns to build Jewish settlement in their place