IDF soldiers find Palestinians beaten by settlers yet do not ask the right questions. An incident that will, inevitably, go completely under the radar. 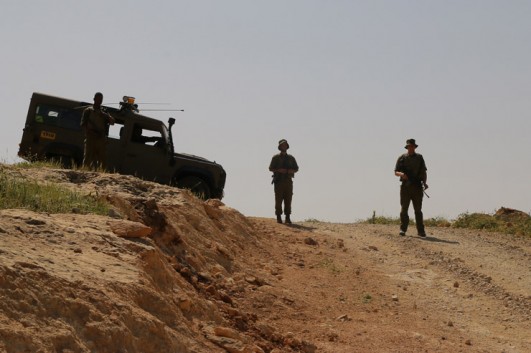 On November 21, 2015 B., a Palestinian youth, went with his friend H., from his village of A-Dik in the West Bank, to bring food to H.’s father, who was busy working the land.

At about 14:00, they found H.’s father and gave him the food. Then they went to another part of the same plot of land to gather “white fragrant flowers named ‘Jargas,’” as B. would later recount. They were about a kilometer away from the Israeli settlement of Bruchin when they noticed three horsemen approaching them. Only when they were very close did the Palestinians realize they were Israeli civilians.

Two of the riders were armed: one with a rifle, the other with a handgun. At gunpoint, they forced the two boys to stand still. The third rider, armed with a club, began beating them while the two others pointed their guns at them. The beating went on for a long while — B. thought it continued for a full ten minutes. The two didn’t dare to attempt an escape, since they believed they would be shot.

After that the Israeli civilians forced the two boys to take off their coats and shoes, and led them barefoot toward a guard tower near Bruchin. B. estimated they walked for about a kilometer, and said the guns were pointed at them the whole way. The tower wasn’t manned, and the settlers began hitting them again. As they beat the boys, a military jeep arrived.

What did the IDF soldiers, the representatives of the sovereign power, do when they saw two young men standing barefoot, guns pointed at them, and a man beating them with a club? Did they detain the attackers, as any reasonable person would do?

Of course not. They didn’t even speak to the Israeli civilians, who now exit our story. The soldiers tied the young Palestinians’ eyes with cloths and kept them in the jeep for several hours. Later, described B., the soldiers would drive the detainees without any stated reason to Bruchin, where they were turned over to the police. A policeman named Shlomi used B.’s cellphone to call his father: come and pick your son up from the entrance to the settlement. The father did not understand what the call was about, thinking at first that it was a prank. In the meantime, B. asked another policeman to bring him some water; in response, he says, one of the policemen beat him. 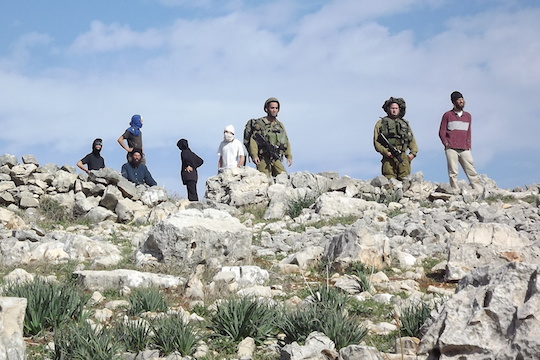 To summarize: Israeli civilians lacking any legal authority detained two boys, beat them at gunpoint and partially undressed them. Israeli soldiers took them without making a fuss, asking any questions or detaining the attackers. One policeman beat a detainee, and another turned them over to their parents.

Wait a minute. What was this detention all about? Was it even legal? If there was a valid reason for the detention, why were the detainees discharged? If there was no reason, why weren’t the people who detained them without cause arrested? Why, for that matter, weren’t they arrested on the spot by the soldiers? The soldiers, you will recall, reached the tower when the second assault on B. was still in progress. What sort of law enforcement officer sees this kind of behavior and moves on?

The answer, of course, is an Israeli soldier in the West Bank — as long as the victim is Palestinian.

What is the purpose of all this? The usual one: intimidating the Palestinians in order to condition them not reach their land adjacent to settlements, so that this land can be easily taken over by Israeli settlers. Since the incident B. has become afraid of going to his father’s land. The latter says that “It’s clear they want to scare us, so that we won’t get on our land.” In this case, he said, “they succeeded.”

B. does not intend to lodge a complaint with the police — he does not trust them, and rightly so. He repeats the phrase we keep hearing from Palestinians: “When the judge is your enemy, to whom should you complain?”

Who knows, maybe in a few years we will hear the story from the other side: that of the soldier who saw the beaten Palestinians and wanted to do something about it, but knew there was no point — whose very participation in this minor crime would eat him up inside for years to come. The people who profit from this crime will, naturally, demand he shut up.