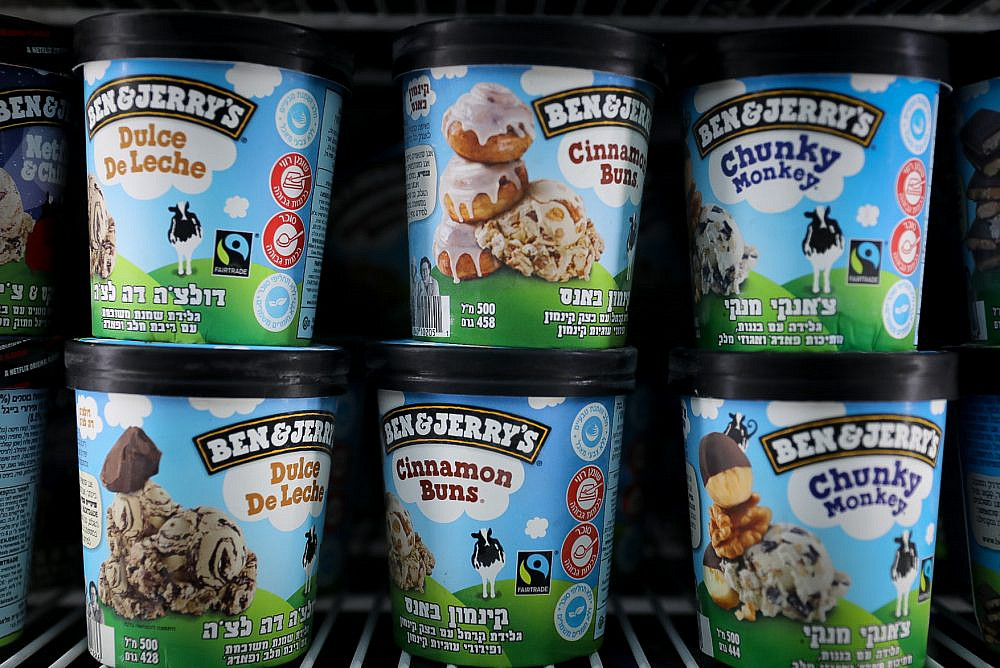 Ben & Jerry's ice cream on sale at a shop in Jerusalem. (Jonathan Sindel/Flash90)

In the blazing summer months, it is no wonder that Ben & Jerry’s decision to stop selling products in Israeli settlements in the occupied West Bank has put Israelis in a sticky situation. Let’s be honest: who doesn’t crave ice cream in this sweltering weather, and especially when there are so many excellent vegan options?

As Israel Ganz, the head of the Mateh Binyamin Regional Council, which governs over 45 settlements in the West Bank, put it: “The Israeli government cannot allow a situation in which a large international corporation boycotts half a million citizens of the country.” Violating the natural right of every person, irrespective of religion, race, or sex, to a bite of Chunky Monkey is unforgivable.

Two weeks ago, just an hour’s drive from Israel Gantz’s home, Israeli soldiers demolished the hamlet of Humsa, loaded all the residents’ personal belongings on trucks, and dropped them off miles away. The demolition included not only the residential buildings — the only shelter available to families living in the heat of the northern Jordan Valley — but also their water tanks. One must also wonder whether, in addition to demolishing the homes, displacing the population, and destroying the water tanks, the Israeli authorities also confiscated the residents’ ice cream.

The answer is no. The residents of Humsa do not have Ben & Jerry’s ice cream in their freezers. In fact, they don’t have freezers or refrigerators. Their village doesn’t even have electricity. Like most of the shepherding communities in Area C of the West Bank — under full Israeli military control — and like many other Palestinian communities across the occupied territories living in what the IDF has declared “live-fire zones,” the residents of Humsa have no option of connecting to an electricity grid. They cannot build homes or tents or use the water infrastructure, because Israel rejects 98.6 percent of Palestinians’ requests for building permits on their land. 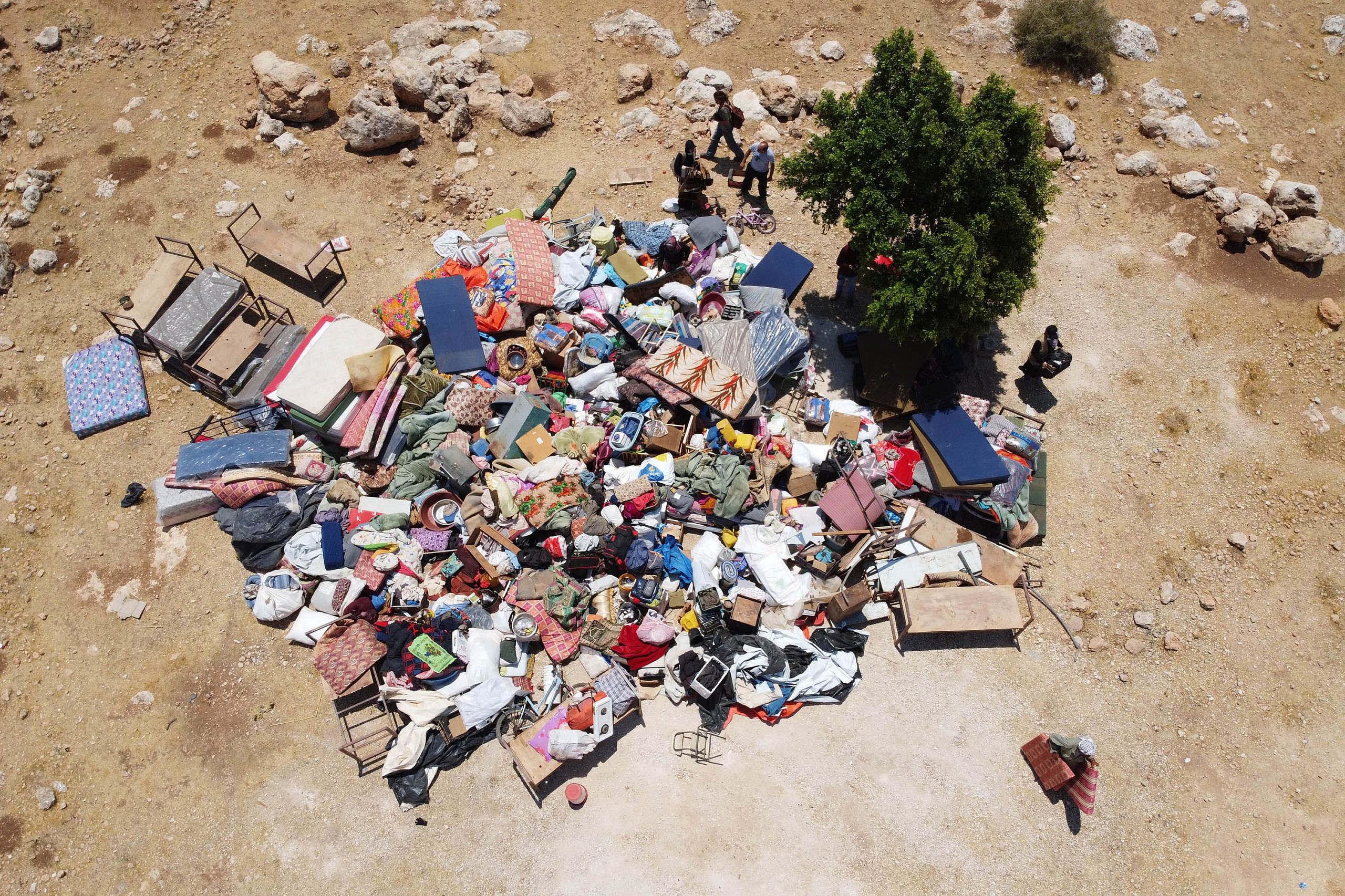 The Israeli Foreign Ministry called Ben & Jerry’s decision to act according to international law — that is, not to treat the territories occupied by a foreign state as territories that belong to that state — a “discriminatory and immoral decision” that “harms Israelis and Palestinians alike.” The ministry’s commitment to equality when it comes to the right to eat ice cream is inspiring.

Interestingly, the same Foreign Ministry never put out a statement condemning Israel’s “discriminatory and immoral decision” when it began yet another wave of legalizing outposts, which are illegal even according to Israeli law yet have long ago been connected to water and electricity, to protect them from demolition. The nearby Palestinian villages, like Humsa, were never “normalized;” they are under constant threat of demolition.

In addition to the transfer in Humsa, an investigative report published last week by Local Call, +972 Magazine, and The Intercept revealed how soldier-settler militias teamed up to kill four Palestinians in May. The same month, the Israeli army seized dozens of Palestinian structures, and settlers destroyed olive groves in three various locations across the West Bank. Yet none of these events made headlines in Israel. For years, the occupation, the daily reality in which the basic rights of millions of Palestinians are routinely violated, simply hasn’t interested Israeli media or public.

Instead, the decision of an American ice cream company is making headlines. And that is precisely why Ben & Jerry’s move is so important — it has forced us Israelis to once again look at Israel’s military regime in its face.

The Foreign Ministry further claimed that Ben & Jerry’s decision “does not promote peace and conflict resolution, but rather strengthens opponents of reconciliation between the two peoples.” I have no idea how much influence an ice cream corporation can have on promoting peace, but what I do know is that for there to be peace and some kind of “solution to the conflict,” we, as Israelis, must deal with the occupation. 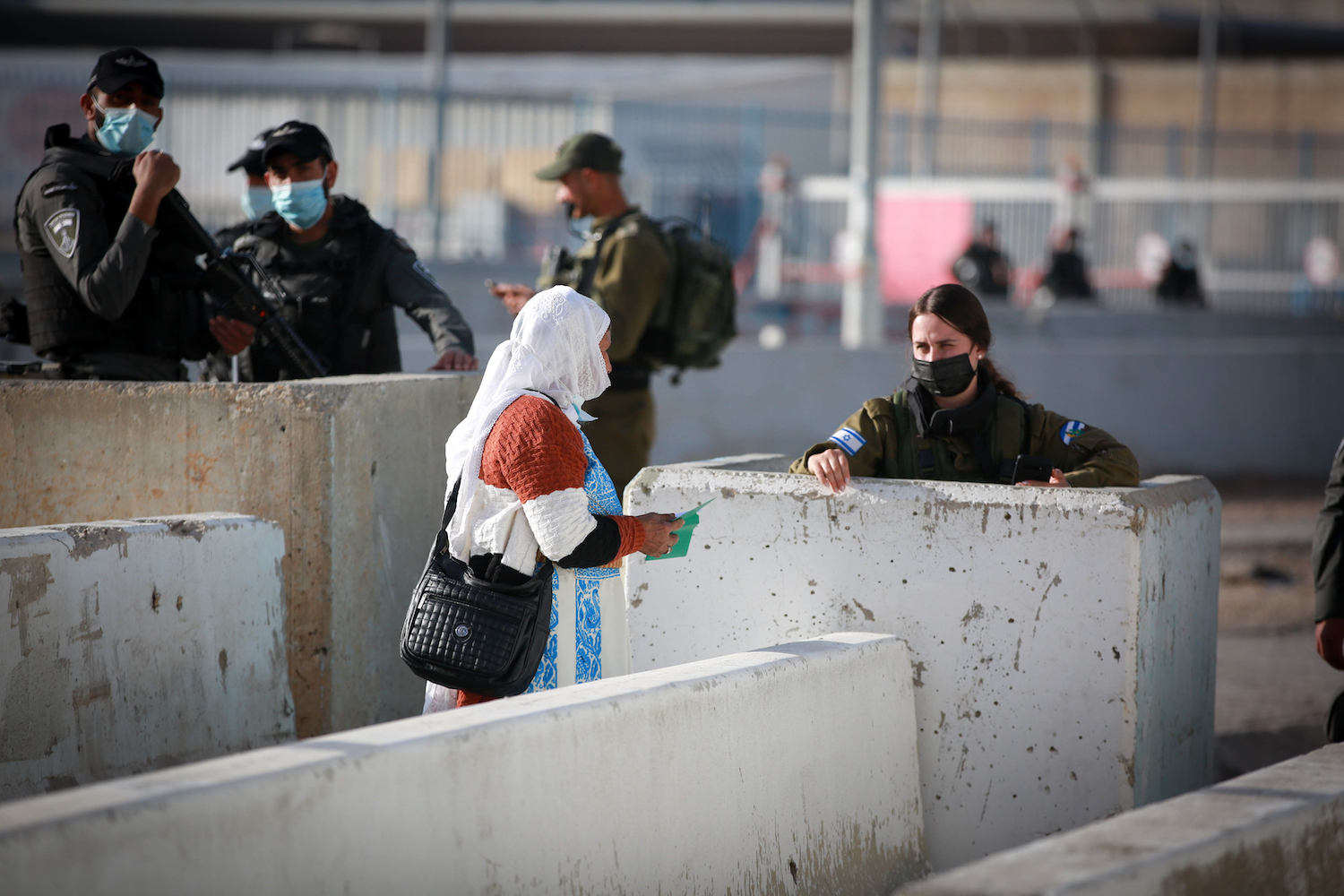 We must remember that it exists every day, just as Palestinian workers are forced to remember it every morning when they pass through a checkpoint, and when they wonder whether their house will still exist when they return in the evening. I would like our society to recognize that we hold millions of Palestinians under occupation, and thus must work to end it. I would like the voices of Palestinians, who repeatedly try to explain to us the daily price they pay for the fact that there is still no “peace and solution to the conflict,” to be enough to spur us into action.

But this is not the reality. The reality is that we need someone to take away our ice cream for us to remember that we are occupying another people.

So please, take our ice cream.