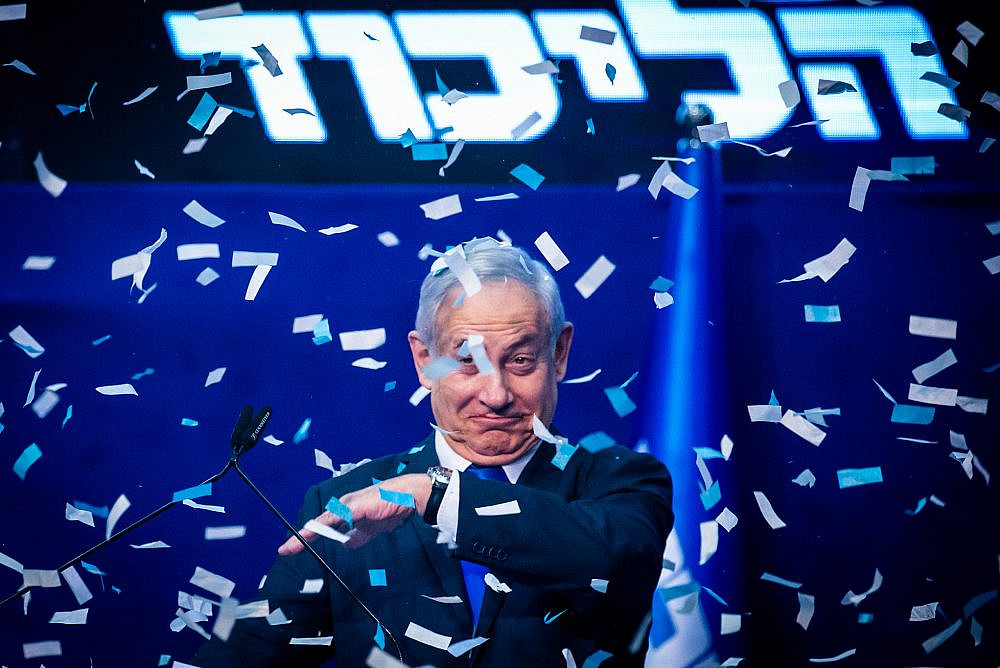 Prime Minister Benjamin Netanyahu and his wife Sara address their supporters on the night of the Israeli elections, at the party headquarters in Tel Aviv, March 3, 2020. (Olivier Fitoussi/Flash90)

Around 1 a.m. on Tuesday, a few dozen Likud supporters and Benjamin Netanyahu “fans” stood outside the locked gates of the Tel Aviv Fairgrounds after police announced that the convention center was at full capacity. When former Likud MK Oren Hazan arrived, some started yelling at him, calling him a traitor and saying that he was no longer a member of their party.

Close to 3 a.m., Netanyahu took to the stage with his wife Sara to address the now half-empty hall. The crowd began to chant: “Mandelblit go home” (referring to Israel’s attorney general), and “No to unity government.” To them, the Likud’s “tremendous” victory requires the formation of an uncompromising right-wing government with no unwanted partners — even though it is still unclear whether the final results will even allow that.

In his speech, Netanyahu repeated the same empty promises that he has been offering the Israeli public for more than a decade. But a few important things were clearly absent.

Netanyahu spoke about how great it is to be living in Israel. “They [the voters] trusted us because we ushered in the best decade Israel has ever seen, in terms of the economy, security, tourism, and foreign relations,” he said. As he had throughout his campaign, he promised “significant reforms to the economy” without getting into details, adding that all he needs is just “a few more years.”

Netanyahu did not mention the fact that one in every four Israelis lives below the poverty line, or that the nation’s education system is performing below the OECD average. He did talk about how Giv’at Olga in the north has transformed over the years from an immigrant absorption camp to a neighborhood of full high-rises buildings, but without saying a single word about how most Israelis cannot afford to buy an apartment — even in Gi’vat Olga. He did not explain why the government has not implemented plans to promote affordable housing, all while destroying public housing. 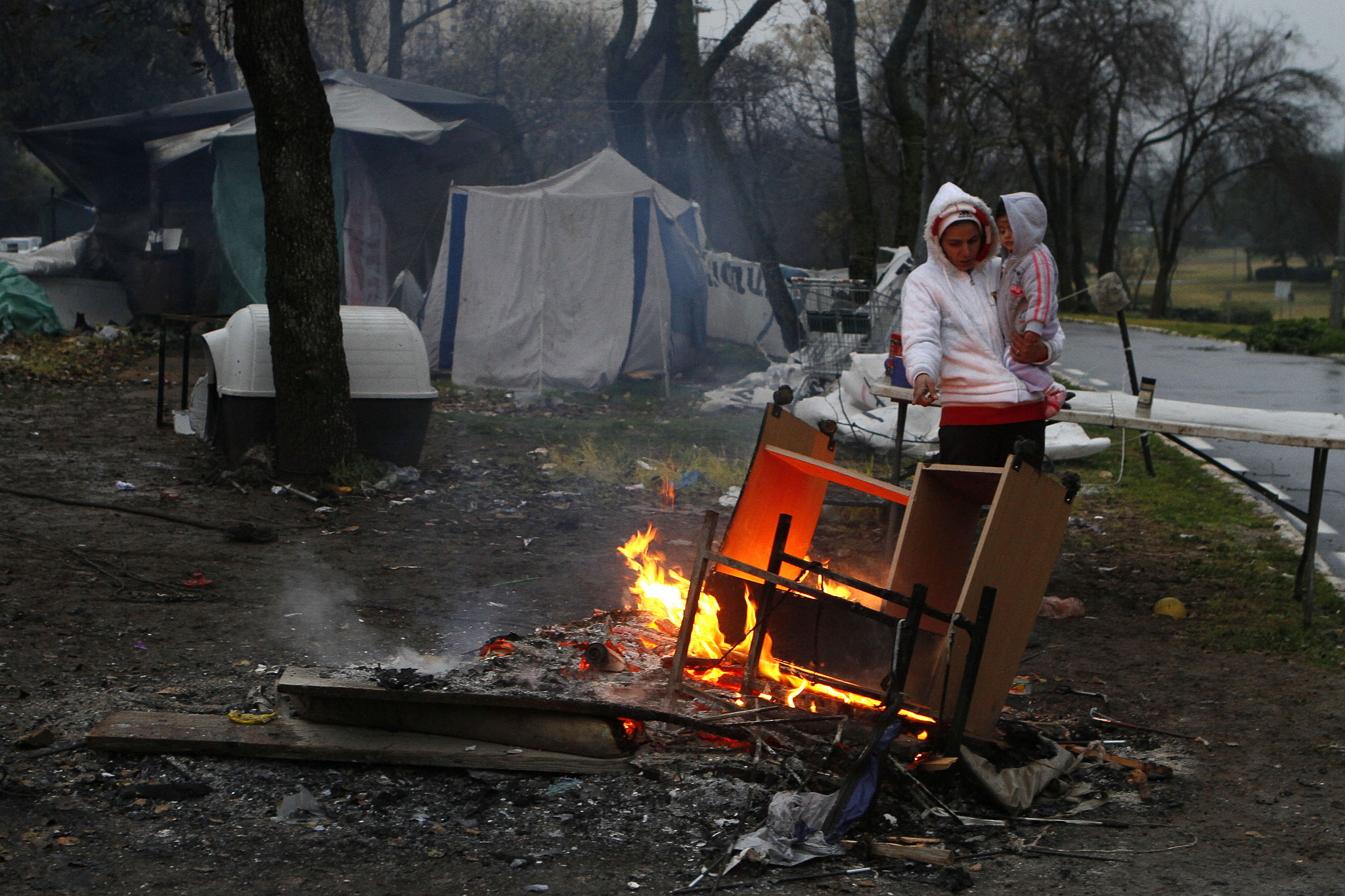 A family outside a homeless camp in Sacher park in Jerusalem on January 23, 2012. (Uri Lenz/Flash90)

In the list of thank-you’s Netanyahu gave at the start of his speech was Yair Revivo, the man who developed the Likud’s elections app, called Elector, to “manage” registered Likud voters. The app was one of the party’s central campaign tools in the latest election. Netanyahu, however, did not talk about the severe security breaches associated with the app, which led to a series of data leaks. His campaign kept using the app despite warnings from Israel’s Privacy Protection Authority. “Suddenly Likud had data, you saw what a difference it made,” Netanyahu continued.

Every party has access to the voters’ registry. What Netanyahu means by “data” is tracking voters’ political opinions, which allowed Likud to classify voters and issue targeted campaigns. “We went city by city, neighborhood by neighborhood,” he claimed. It appears that Likud was actually able to do so, in addition to campaigning on the ground, mostly with the help of the application. How did Likud gather this data, which seems to include voters’ voting history? Netanyahu did not reveal.

Netanyahu also failed to say anything about the indictments against him, or his upcoming trial. He made it seem as if the charges against him are trivial, and that he will in fact be able to act as prime minister while facing trial. In this way, Netanyahu’s success is in turning the charges against him into claims of “political persecution.” As some remarked at the Joint List’s headquarters on Monday, the voting en masse for Likud is the “normalization of corruption.” By avoiding this issue altogether in his victory speech, Netanyahu sent the message that the trial, like the investigations, is an unimportant inconvenience he will have to encounter while trying to form the next coalition. “We turned lemons into lemonade, and boy how much do I love lemonade,” he boasted.

Toward the end of his speech, Netanyahu repeated his pledge to soon extend Israeli sovereignty to parts of the West Bank, to the sound of roaring applause from the audience. He did not say when or how exactly this will be implemented, and in reality annexation is unlikely to happen in the near future.

During the campaign, Netanyahu only brought up annexation in passing, after polls showed that the release of U.S. President Donald Trump’s “Deal of the Century” had a negligible effect on voters. He, of course, did not mention the Palestinians, or the sections of the plan discussing a Palestinian state and an end to the conflict. Neither did he bring up the clause in Trump’s “peace” plan calling for a population transfer of some Palestinian communities in Israel, which Netanyahu himself allegedly requested to be added. 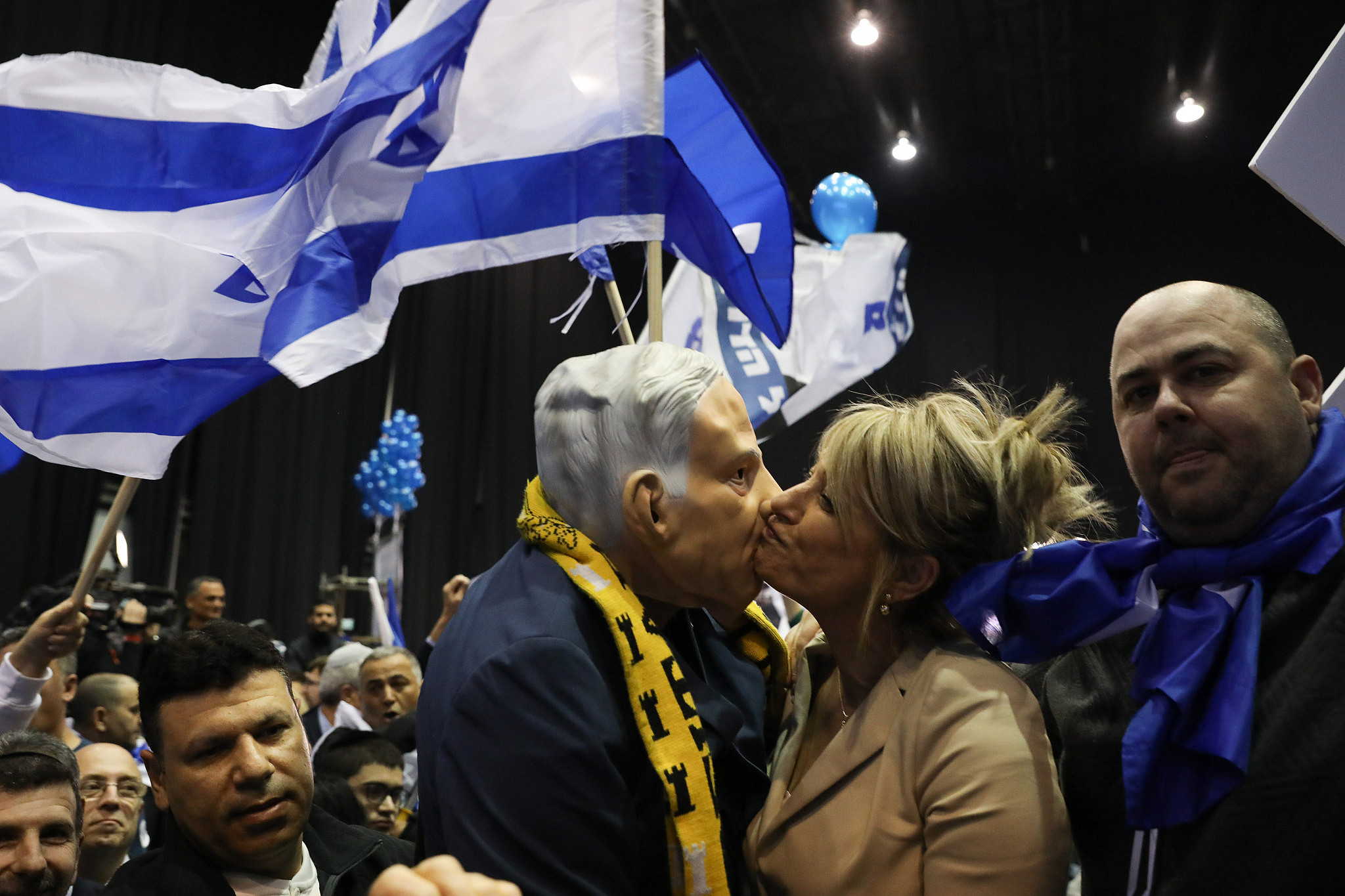 Even though most of Netanyahu and the Likud’s campaign was based on incitement against Palestinian citizens, and on threats that his main challenger, Benny Gantz of the Blue and White party, would fail to form a coalition without the Palestinian-led Joint List, his victory speech made no mention of prominent Palestinian MK Ahmad Tibi, or head of the Joint List Ayman Odeh. In fact, Netanyahu did not even utter the word “Arabs” once, and it was odd to hear him address an audience without a single attempt at inciting against Arab citizens, who voted “in droves” on Monday.

When the audience broke into “no to unity” chants again, Netanyahu asked to clarify: “I will be a prime minister for all Israeli citizens without exception, for those on the left and the right, for Jews and non-Jews, for all sectors and all genders.” It is interesting to see how, throughout his terms as prime minister, the incitement has worsened to such an extent that even Netanyahu does not dare say the word “Arabs” in a positive context, replacing it instead with the term “non-Jews.”

Finally, Netanyahu also failed to address the fact that as of today, he still does not hold a majority of seats and will only be able to form a coalition if MKs from other parties defect. As far as he is concerned, the bottom line is that Likud scored a massive win, and whoever does not join is to blame if Israel goes to a fourth national election. But to enact immunity laws and save himself from trial, Netanyahu will need 61 members of Knesset who are willing to go along with the latter, and not just a relative majority. In that sense, the promise made by the Joint List’s Odeh, that Netanyahu will be ousted thanks to Arab voters, could still come true.