In Boston, the bombings brought out the most generous community spirit among strangers torn apart by violence. In Bethlehem, Israel restricted who could participate in the marathon. But as Gisha’s Sari Bashi writes, dozens of Israeli runners expressed support for letting Gazans participate, emphasizing the hope and purity embodied in the marathon and speaking of their identification with people who challenge their human abilities by doing that amazing thing called ‘running.’ 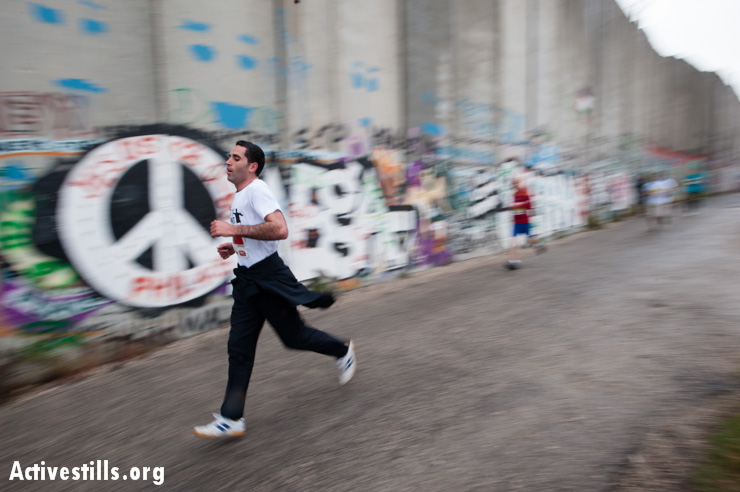 Runners race along the Israeli separation wall as hundreds of Palestinian and international athletes took part in the the inaugural Palestine Marathon which took place in Bethlehem, West Bank, April 21, 2013. Under the title “Right to Movement”, runners had to complete two laps of the same route, as organizers were unable to find a single course of 42 uninterrupted kilometers under Palestinian Authority control.

The first marathon was held in Bethlehem on Sunday, as my colleagues have reported (and photographed, beautifully). The marathon is moment of great personal achievement, but marathons also sometimes become a forum for highlighting other social issues – fundraising for charities and raising awareness of social causes, for example.

This week, the United States weeps as it struggles to maintain the ideal of marathons as a joyous community event, in the face of the horror in Boston. I too was shattered by seeing an event that brings out the most generous community spirit among strangers torn apart by violence. But in Bethlehem, it was inevitable that the personal joy of runners would at best balance out the deep political frustrations that the race inevitably highlighted: competitors ran in the shadow of a great concrete wall, were unable to find an unbroken 42-kilomter (26.2 mile) stretch of land, and 26 runners from Gaza, whose own marathon was recently canceled, were not allowed to participate, because the Defense Ministry would not let them cross to the West Bank.

Here is one act of resistance from Israelis: In response to the latter, Gisha, the Legal Center for Freedom of Movement, appealed to Israelis to appeal to the Defense Ministry directly, to reverse its decision. Perhaps one unintended consequence of the policy was that some Israelis have found a means of identifying with this particular hardship – just one of so many – that Palestinians must live with. After the Bethlehem marathon, the director of Gisha, Sari Bashi, wrote the following letter and has agreed to re-publish it here. Proper disclosure: Bashi is an ultra marathon runner; she is also the person who inspired me to run marathons – to achieve something I never thought possible and which has brought great inspiration to my own life.

I have also provided a free translation of a few of the letters written by Israelis in response to her appeal.

Last week I called on the public and on my fellow Israeli runners to contact the Israeli Defense Ministry and ask for a reconsideration of the refusal to allow runners from Gaza to travel to the Bethlehem Marathon which was held yesterday. Their request was first denied on April 11, because according to a representative from the office of the Coordinator of Government Activities in the Territories, it did not meet the criteria for travel between Gaza and the West Bank.

The response from the runners was amazing. Dozens wrote moving letters to the Ministry of Defense, emphasizing the hope and purity embodied in the marathon and speaking of their identification with people who challenge their human abilities by doing that amazing thing called “running.” We posted some of these letters, which fill me with a sense of pride in the community of Israeli runners.

“In Ancient Greece, they used to stop all the wars prior to the Olympics, and allow free passage for the players and the supporters. In my opinion, we should learn from that.” –Alex Solan, marathon runner.

“To me it seems so simple. This is not about religion, right versus left, or geography. It’s just people and their desire to run.” –Michael Spivak, marathon runner.

“I can’t come up with a reason to prevent people from running in an event that they trained so long and hard for. I can imagine that that it might just be possible for things like this to become a bridge. I hope that one fine day, I’ll be able to participate too.” –Ilan Zisser, marathon runner

Sari herself wrote: “Life in the shadow of a conflict is hard for Palestinians and Israelis. But running a marathon can at least provide one beautiful moment of human effort and realization of athletic potential.”

Unfortunately, the Defense Ministry refused to reverse its decision. The marathon was held in Bethlehem without the Gaza runners, among them a female runner, Sanaa. In my opinion, this is a missed opportunity to do something that is simply good – for runners who trained for months for a marathon that was canceled, for a female runner who can’t race in Gaza because of the restrictions the government places on women’s participation, and for Israelis, who from a very human place, mobilized to try and help their Palestinian neighbors run in the only Palestinian marathon they have left.

Because of the Israeli holiday last week, we had very little time to act. This type of request has been approved by the Defense Ministry in the past, and I believe we have a good chance to succeed next time.

What can be done in the meantime? I was pleased by the discussion that developed within the running community about Palestinian athletes and our relationship with the people who live in the Gaza Strip, a discussion that remained respectful, didn’t necessarily always reflect agreement, but rather created an honest exchange of opinions and a willingness to listen to one another. I am not surprised that the optimistic, principled and supportive nature of Israeli runners found expression also in the way they handled their differences of opinion.

I invite you to continue the discussion, learn more about the policy on the Gaza Strip and share with others.

I am disappointed that Sanaa, Nader and their friends did not run in Bethlehem yesterday, but I’m very proud of the Israeli runners who supported their request. Next time, we’ll be able to get them to their race.

Looking forward to seeing you on the running trail.