Al’Seefer lies uphill from the settlement of Beit Yatir, just beyond the South Hebron Hills, but the tiny Palestinian village feels worlds apart from the 33-year-old settlement. Indeed, the daily lives of Al’Seefer’s residents, some 60 in number, are mired in extraordinary logistical challenges on account of the village’s physical location: flanked by the Green Line on one side and by the separation barrier on the other, it belongs to the no man’s land known as the Seam Zone. 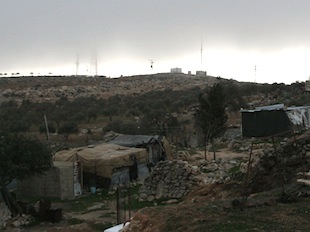 Visually, the two agricultural communities make for incongruous neighbors. One has been carefully cultivated from the roots up, the other systematically neglected. The extent of their stark economic disparities is immediately apparent: Beit Yatir, its telltale red-roofed homes planted like crops in neat, rectilinear rows, presides imposingly over the hilly terrain. Al’Seefer merely blends in. Due to strict bans on construction, the village’s building materials are often limited to tarp and corrugated sheet metal, while its remaining houses are left woefully derelict.

Still, while Al’Seefer’s economic disadvantages may be in plain view, restrictions on the small community’s mobility – in many ways, a far greater problem – go largely unnoticed. Due to their unique location, village residents, as the saying goes, are stuck “between a rock and a hard place,” corralled by their northern neighbors, yet forbidden from formally entering into Israeli territory. (read “Stuck,” a report on Al’Seefer by Hebron International Resource Network.) The majority of the villagers are children, many of school age, who must make their way across the checkpoint every morning in time for the first bell, a process that can take up to an hour.

Mahmoud A’buqbeita, 45, is speaking out about the routine hardships he and his family face, in the hopes that something will change. His problems are numerous: the closest accessible water source lies just beyond the checkpoint. Villagers are legally forbidden from driving a car with Israeli license plates, so they either maneuver carts to the border, then walk, or else make the entire day’s journey on foot. Medical care presents the same logistical quagmire, and many residents of Al’Seefer, including Mahmoud’s elderly mother, mostly make do without. Al’Seefer families also receive no visitors, as their family and friends are unable to cross the checkpoint without proper documentation. Villagers themselves must obtain special permits every three months in order to remain on their own land. 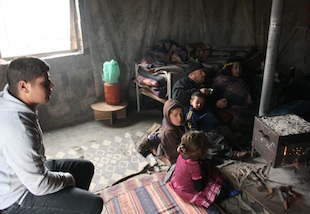 Members of the A'buqbeita family in their home (photo: Ariel Bardi)

Mahmoud and his family hosted me for a couple of days as I compiled research on their perilously complicated living situation. Though my time with them was brief, I was able to observe first-hand the effects of their social and physical isolation. The open fields and scattered hills that surround the family’s small plot of land belie a gnawing claustrophobia, to which I had already succumbed by the second morning. The family of fourteen and I, along with three other researchers, had spent the previous evening piled in front of a small television set. At the time of my stay, the family received only an hour or so of electrical power per day from Mahmoud’s brother, who has obtained Israeli citizenship – and thus far better amenities – through his Nazareth-born wife. In honor of our visit, however, we were treated to a full evening’s viewing entertainment; the ten A’buqbeita children were enthralled. I asked the family how they tended to wile away the wintry evening hours with no lights, let alone several channels’ worth of programs. They told me that they sit in the dark, or sleep.

In considering the largely invisible restrictions that have been placed on the family’s range of movement, I couldn’t help but think of the electronic fences that encircle the lawns of certain American suburban homes – invisible barriers, but ones still deeply felt by those they’re designed to keep in.

On the other hand, the checkpoint, which divides Al’Seefer from the rest of the West Bank, is a permanent, observable presence. It snakes around the green line in order to keep Beit Yatir on the Israeli side of the barrier, leaving the village entirely cut off and vulnerable to settler intimidation, a persistent fear. The village children must pass alongside the settlement on the way to their nearby elementary school, and are often victims of harassment from drivers traveling along the busy road. I escorted several children to their classes on my last morning with the A’buqbeita family. While they made it through the checkpoint in record time with four internationals in tow, it was clear how such a procedure – repeated twice daily – could prove intolerable. The children’s stoic, habitual acceptance of this frustrating formality helps to contextualize the more mundane implications of life under occupation, when all that it appears to involve is a lot of waiting around.

The quality of life in Mahmoud’s home improved shortly after my visit: the household is now outfitted with solar panels, courtesy of the Israeli activist group COMET-ME, which provides renewable energy solutions to off-grid communities throughout Palestine. On February 27, the Israeli Civil Administration issued demolition orders to four communities in the Southern Hebron Hills, on the grounds that they lack permits; earlier in the month, COMET-ME had also been given stop work orders for two other electrification systems. While Mahmoud’s family is still with power, COMET-ME estimates that over 500 people will be affected by the ruling. Until then, the communities, which, much like Mahmoud’s, are rural and isolated, will keep waiting, with nowhere to go.

Ariel Bardi is a PhD student at Yale University.  She is in Israel and the West Bank researching and photographing settlements.