While many Israeli media reports praise the crowds who led (to) the overthrow of Mohammed Morsi, conservative writers continue to view the Arab Spring with skepticism | The common view is that the regional turmoil relieves some of the pressure on Israel over the Palestinian issue. 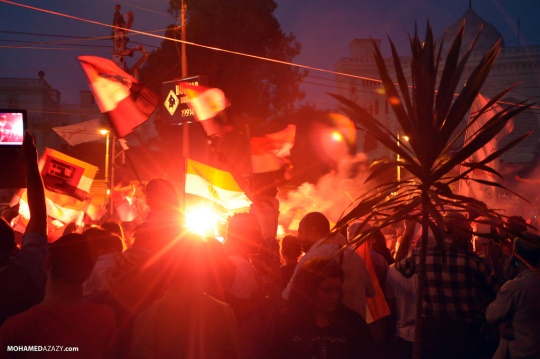 In the morning following the overthrow of Egypt’s Mohammed Morsi, there isn’t a single unified voice coming from Israeli officials and the national media. While some pundits welcome the Muslim Brotherhood’s removal from power (pointing mainly to its very hostile rhetoric towards Israel) others think that Morsi ended up being surprisingly cooperative with Israel. The Egyptian army is widely recognized as the single most important institution in maintaining the 1979 peace treaty between Israel and Egypt, but the chaos that the second Egyptian revolution will bring seems like the real danger.

In the left-leaning daily Haaretz, Anshel Pfeffer points to four reasons “Israel would miss Morsi”: that he didn’t support Hamas and was efficient in bringing a ceasefire during November’s Pillar of Cloud operation in Gaza; that he operated decisively against the Gaza smuggling tunnels and militants in the Sinai Peninsula; and that he didn’t get close to Iran. The most interesting argument Pfeffer raises is one I didn’t see anywhere else:

Morsi’s tenure was the first in which a large and popular Egyptian party that was elected in a democratic process supported, even if begrudgingly, the peace treaty with Israel, and justified it to the Egyptian people.

I would add that this is was a precedent not only with Egypt, but with the entire Arab world.

Ynet’s military correspondent Ron Ben Yishai has a piece this morning on “the Revolution’s Hangover,” referring to the challenges the army is facing today. Ben-Yishai thinks that as far as Israel is concerned, it appears Morsi’s ouster will not have a direct effect on us, certainly not in the short term.”

Also in Ynet, an interesting op-ed by the chairman of the Chaim Herzog Center for Middle East Studies presents a much more admiring tone. “Egyptian society’s show of force proves that forecasts of ‘Islamic winter’ were detached from reality,” writes Yoram Meital in a piece titled, “Arab Spring still here.” 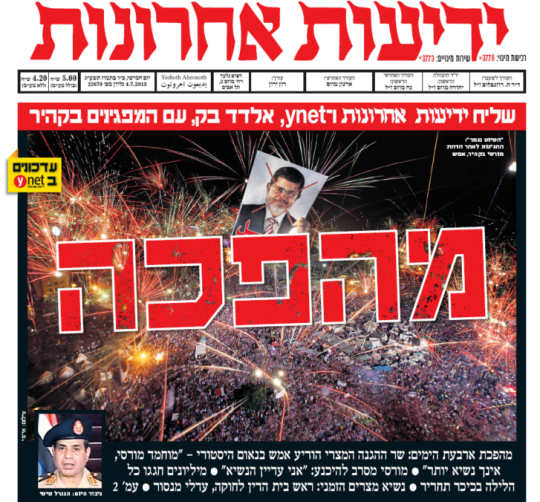 Cover of the Israeli daily Yedioth Ahronoth in the morning following the removal of Egypt’s Mohamed Morsi from power by the army. The headline is “Revolution”

The conservative pro-government daily Yisrael Hayom displays a much more cynical tone. The paper’s top pundit, Dan Margalit, attacks the Obama administration for aiding Morsi’s regime. The administration, writes Margalit, learned that there are no moderate Muslim Brothers. “Israel has no reason to be sorry [for Morsi’s departure],” concludes Margalit.

Also writing in Israel Hayom, Prof. Eyal Zisser called  Egypt “a military democracy.” Zisser estimates that the army and the Brotherhood – “the only substantial organized forces in Egypt” – will continue their battle in the years to come, with the masses of protesters deciding who has the upper hand.

Also on the conservative side, The Jerusalem Post argues that “Jerusalem prefers the devil it knows to the unknown.” A report in Maariv cites unnamed sources who fear that “terror groups will take over the Sinai Peninsula.“ Maariv’s leading conservative pundit, Ben Dror Yemini, argues that despite the revolution, “the Egyptian pulic is getting more religious.” Yemini warns of “the illusion of the Facebook generation.”

On social media platforms I read some comments in Hebrew concluding that the “Arabs” cannot sustain a functioning democracy, while others admired the activism of Egyptian youth who took to the streets in such large numbers. It is worth remembering that some people argued in 2011 that the Arab Spring, and especially the Egyptian revolution, served as inspiration to Israel’s Tent Protests (in the largest Tel Aviv rallies there were signs specifically quoting slogans from the Egyptian revolution). Today, some lamented the fact that there is little hope of an Israeli protest movement re-emerging.

Perhaps most interesting is the way a clip of an Egyptian journalist and protester speaking in Hebrew with the Israeli Channel 10 went viral. Heba Abu Saif was positive and engaging, urging Israelis to take to the streets whenever their leaders bread their promises or compromised the public’s rights. You can watch the clip with English subtitles here.

A couple other issues I noticed in the past few days:

Reports on sexual assaults in Tahrir Square received a lot of attention in the Israeli media, and sometimes their coverage overshadowed the rest of the revolution, especially until yesterday evening when the attention went back to the fate of the presidency. At times, those reports were used by right-wing commentators for notes on “the real nature of the revolution” in a way that gave the impression it is not the fate of the women who were assaulted they were worried about, but rather some point they were trying to make about Arabs or Muslims in general.

There was also a feeling that the pressure on Israel “to do something” with regard to the status quo in the Occupied Territories would decrease again. With Syria torn by civil war and Egypt is descending into chaos again, many Israelis feel that the attention given to the Palestinian issue is absurd. While I obviously don’t share that view, I think that it is true that as long as the West Bank is “quiet,” some foreign powers will quietly welcome the stability provided by the occupation and the Palestinian Authority, and Israel will be free from pressure (or any other form of accountability), at least as long as it doesn’t take overly drastic measures on the ground.

The opposing view, according to which the Arab Spring presents an opportunity for Israel to resolve the Palestinian issue and find its place in the “new Middle East” – among other things, due to the collapse of any real threat against Israel – is held by a very small minority. There is very little, if any, domestic pressure for change.