Despite justified fears of a false debate that would only deepen the exploitation and oppression, it would be irresponsible to give up this opportunity for radical change, writes Tent Protest activist Matan Kaminer 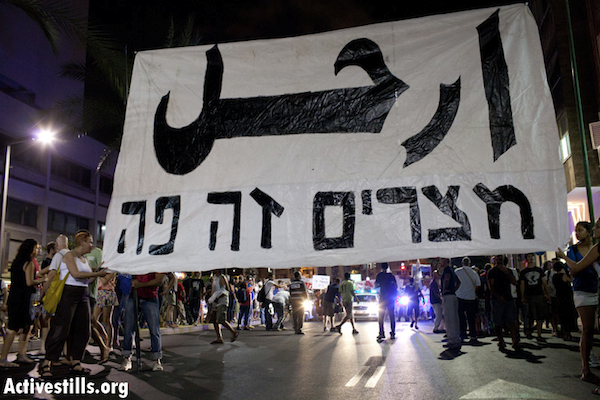 Placard citing the Tahrir slogan of "Go!" and reading "Egypt is Here" at the J14 rally on August 6. Photo: Oren Ziv, Activestills.org

Many progressives around the world have been wondering out loud about what exactly has been going on here for the last month. Who are the unprecedented crowds taking to the streets in the name of “the people” (ha’am), demanding “social justice” (tzedek hevrati), and what exactly do they want? Is there any connection to the ongoing occupation and oppression of the Palestinians? And if not, can the protests be at all justified?

In order to achieve true “social justice” – that is, to defeat exploitation in all its forms – it is necessary to defeat the particular kinds of exploitation inherent in the situation, even if these appear as something else, for example colonial oppression. In these cases, where one could speak of the struggle between exploiters and exploited being deflected onto other channels, the battle against exploitation is twofold. It is a battle against the particular (colonial) form of exploitation, and a battle to return from the deflection to the real issue at hand. One must keep guard, then, against false returns that seek shortcuts. In a situation where class exploitation has taken the form of colonial oppression, a “class struggle” that ignores the colonial context is no class struggle at all; it is destined to either dissipate or change into something altogether different.

Zionism is a colonial movement, which has over its history shifted from expropriation of land from the native Palestinians (roughly 1917-1967), to their exploitation as a cheap labor force (1967-1993), and finally to their exclusion and marginalization (1993 to the present day). Any class struggle in Israel, which ignored this oppressive relationship would be, inevitably, a false one.

This does not make it meaningless to speak of classes within the Israeli socio-economic structure, which today forcibly excludes the Palestinians of the Occupied Territories (OT), but not those with Israeli citizenship. Indeed, such a class analysis is necessary for understanding the current situation in Israel such. It is not my intention to carry it out here, only to point out the change in the structure which has brought about the current uprising. Israel has for several decades now been climbing steadily up the scales of the Gini index. The rich have gotten fewer and super-richer, while the poor have become poorer and more numerous. However, it has only been in the last few years that precarity has reached the younger generation of the middle class.

Many have correctly pointed out that the standard of living demanded by the Israeli protesters would be considered high above middling in most Arab countries. This ignores the fact that the middle class in Israel did enjoy this standard until recently and that older generations continues to enjoy it. Those critics who imply that these demands come at the expense of the Palestinians also miss another crucial point. The official programme of rapacious upwards redistribution which is now attacking the middle classes has been carried out  precisely in order to finance the occupation and indemnify the Israeli capitalist class for the loss of the “peace dividend” which it so covetously pursued during the Oslo era.

Another point that is easily overlooked is that the current crisis is also a crisis of colonization. Many in Israel, on both the right and the left, are quick to point out that the Israeli welfare state is alive and well – in the settlements, where housing (the flashpoint of the rebellion), education, transportation and other amenities are heavily subsidized. Ample funds and ideological support are also available for young people willing to assist in the colonization (“Judaization”) of the Galilee/Jalil and Negev/Naqab. The young generation, who are demanding affordable housing and gainful employment in the urbanized coastal strip around Tel Aviv, have roundly rejected these solutions.

While not hostile to the Palestinians, the movement may therefore appear as a “wheel within a wheel,” an internal Israeli struggle neutral with respect to the colonial background. This is certainly the picture that the leaders of the movement–who are apparently “privately” against the occupation–wish to broadcast. However, even in the medium term, this is untenable. The “wheel within” must either dissipate or mesh its gears with “the wheel without,” either through reincorporation into ethnocratic, even fascist politics, or through the emergence of a bi-national movement and a re-imagination of “the people.”

The second of these options currently seems unlikely. At first, the reigning right tried to ignore the protests; when this failed, it attempted a two-pronged strategy to jump on the bandwagon on the one hand and to discredit the movement as an anti-Zionist plot on the other. Both these approaches have so far met with total failure. The explicitly racist “hilltop youth” earned the dubious honor of being the first group ejected from the largest tent camp, on Rothschild Boulevard in Tel Aviv. And public opinion – which has certainly not become anti-Zionist itself over the past few weeks – remains steadfastly and overwhelmingly supportive of the rebellion. Support rates for it fluctuate around eight-five percent. When asked why they have not participated in the protests so far, over sixty percent of respondents in a recent poll cited technical reasons. Only 7.9 percent have taken up the right’s rhetoric that “political interests” (i.e. the left) are behind the protests, fewer even than the still-apathetic 9.8 percent who believe that “protest can’t change anything.”

The first possibility, of the rebellion just going away, perhaps satisfying itself with crumbs from the table, is the one currently being actively pursed by the Israeli establishment. This certainly includes the military establishment, which cannot publicly come out against the movement. As blogger Idan Landau has pointed out, over the last few years the Finance Ministry has been systematically bilking social ministries (Education, Welfare, Health, etc.) in order to transfer funds to the Ministry of Defense. Even the most limited response to the protesters’ demands will necessitate greater social expenditures, imposing a cap on the military’s endless thirst for cash. The same is true for the better-hidden expenditures on the settlements.

While tensions are already visible between the young, middle-class, and unelected leadership and the multi-class and multi-ethnic grassroots base of the movement, morale is high and the movement is busy preparing itself for the long haul. Moreover, both sympathetic commentators and voices within the movement have already pointed out the greatest danger to its continuity: a conveniently timed war (say, against Syria, whose regime obviously has parallel interests). While the movement is still far from articulating an anti-war position, the public mood – expressed in the media’s sudden disinterest in and disrespect for the pronouncements of usually revered “security sources” – bodes relatively well for an anti-war turn in its discourse.

The third option – the articulation of the current movement with the Palestinian movement for liberation – is certainly difficult to imagine. But it is unnecessary to point out how many of the events of the past year in the Middle East were completely unimaginable a year ago. It may be less obvious that the events in Israel are, at least at the level of discourse, deeply inspired by those of the Arab Spring. The very idea of borrowing any progressive concept from an Arab country was unimaginable here until quite recently. When, carrying an Egyptian flag at a demonstration in Jaffa in January, I told a reporter that “we should learn from the Egyptian people how to rise up,” I hardly believed myself. When, at the huge rally last Saturday, I saw a giant sign plastered with the Arabic irhal! (go!) and subtitled in Hebrew “Egypt is here” – I was hardly surprised. We should not overlook the profundity of this change because of its apparently rhetorical nature.

In addition, many forces are busy at work preparing the articulation of the Israeli uprising with Palestinian demands. Naturally, it is the Palestinian citizens of Israel, especially those active in the (sometimes dogmatically) anti-nationalist Democratic Front for Peace and Equality (al-Jabha/Hadash) who are heading this effort. They are doing this both by raising protest camps in mixed and Palestinian locales, and by challenging the central camp to engage with Palestinian demands through the provocative “Tent #1948” on Rothschild Boulevard. These efforts have already borne fruit, for example in the decision to have Palestinian-Israeli writer Odeh Bisharat open the rally last Saturday (perhaps the biggest in Israeli history). Bisharat spoke about the unrecognized Bedouin villages in the Negev and against land expropriations and home demolitions, and led the massive crowd in chanting, “Jews and Arabs refuse to be enemies.” The leap over the green line to solidarity with Palestinians in the Occupied Territories has yet to be made. But it has been fascist Foreign Minister Lieberman’s great achievement to have already erased the green line from the hearts and minds of most Israelis. In today’s Israeli discourse there is – for better or worse – only a minor difference between the Arabs of 1967 and those of 1948.

So is this a false return, a pseudo-class struggle occluding and colluding with the oppression of the Palestinians? Or is it the beginning of a true return, uniting Arabs and Jews in an anti-colonial and anti-capitalist popular project? Can the ‘sha’b’ in “al-sha’b yurid isqat al-nizam” and the ‘am’ in “ha’am doresh tzedek hevrati” become one and the same people, not only in Israel-Palestine but also across the region? While heavy skepticism would not be unjustified, there can be no analytical, objectivist answer to this question, as the current conjuncture is radically open. If the movement chooses the path of the false return, it may gain tactically, but it will remain fragile, inconsistent and vulnerable to dispersion through the call to arms. A mass movement heading in the direction of the true return may still seem unlikely – and certainly it will meet with brutal repression, if it does coalesce. But in these days of possibility, it would be wrong to rule it out, and irresponsible for radical Israelis not to do everything in our power to realize it.

Matan Kaminer is an activist and an MA student at the Department of Sociology and Anthropology at Tel Aviv University. Currently Matan is involved in the protest camp at Levinsky Park in South Tel Aviv.

Read more commentary and criticism of the Tent Protest from +972 Magazine here.