The Israeli government has begun the first stages in its planned deportation of African asylum seekers. Refugee activists and advocates are preparing to fight it. 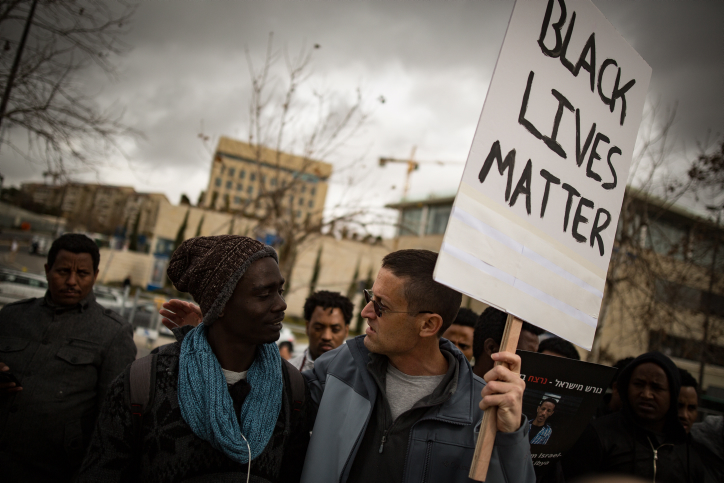 African migrants gather during a protest outside the Supreme Court in Jerusalem on January 26, 2017. (Sebi Berens/Flash90)

The start of the new year marked the first stages of the Israeli government’s plan to deport the roughly 40,000 asylum seekers, most from Eritrea and Sudan, currently living in Israel. The government announced in early January that asylum seekers have three months to leave the country; those who remain in Israel after the three months will face a choice: deportation or prison.

The Population and Immigration Authority also announced that it was recruiting additional inspectors to carry out the deportation, offering a bonus of 30,000 NIS, or roughly $9,000, to civilians willing to participate in the deportation operation. Prime Minister Benjamin Netanyahu’s cabinet is reportedly exploring the possibility of forcefully expelling the African asylum seekers en masse. “We have removed about 20,000,” the prime minister told his cabinet during the first week of January. “Now the task is to remove the others.”

Refugee activists described the feelings among the different asylum seeker communities as a mix of determination and despair. “People are frustrated, depressed, and exhausted,” Mutasim Ali told +972. “All of the protests we’ve done haven’t done anything. The opposite has happened. Government policy has gotten harsher and crueler.” But, he added, “We will continue to struggle with all the tools we have. In the end, justice will win out.”

Ali, a refugee rights activist originally from Darfur, was the first Sudanese national to be granted residency by the Israel government. To date, the Israeli government has recognized only 11 individuals, including Ali, as refugees. 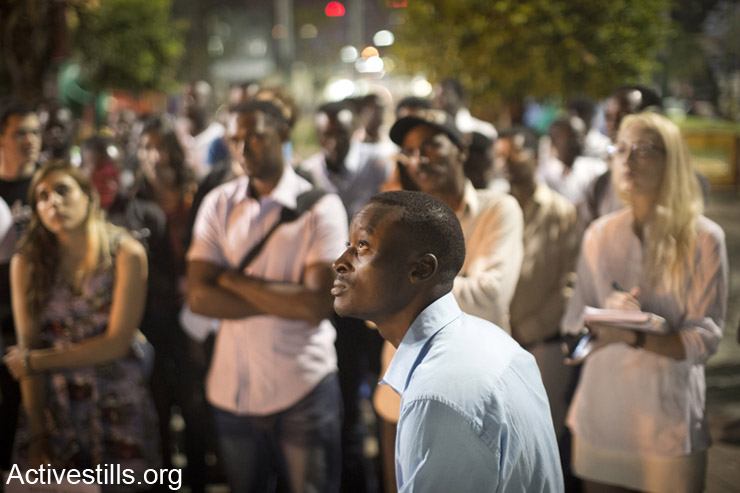 Mutasim Ali, an African Asylum seeker, speaks to friends and activists, two days before he is due to arrive to the Holot detention center, Tel Aviv, May 3rd, 2014. Ali is one of the organizers of the Asylum seekers’ struggle in Israel.

Ali stressed that stopping the deportations would depend on Israeli citizens taking action alongside the refugees. “This is absolutely the struggle of Israeli citizens,” he said. “The only way to stop this is through the Israeli public.” Deporting the asylum seekers, he added, would violate the foundational values of the Jewish state.

Attorney Asaf Weitzen, formerly of the Hotline for Refugees and Migrants, said that public pressure on the Rwandan government could be key to fighting the deportations. “There’s a reason Rwanda is keeping this a secret, why they won’t talk about it in public,” Weitzan said, adding that activist efforts should focus on protesting in front of Rwandan embassies around the world and flooding them with faxes and emails. Ali confirmed that a protest in front of the Rwandan embassy in Herzilya is planned for next week.

The Israeli government claims that its agreement with Rwanda now allows for the deportation of asylum seekers against their will to Rwanda.  As recently as November, however, Rwandan Foreign Affairs Minister Louise Mushikiwabo spoke only of receiving asylum seekers who had agreed to leave Israel for Rwanda voluntarily.

“There is a feeling of disappointment, that there’s no future,” Monim Haroon, a Sudanese asylum seeker and community activist based in Jerusalem, told +972. “No one knows what’s going to happen, if they’re going to be deported. People know that others have been killed when they returned, people have gotten to Libya and drowned in the Mediterranean Sea.”

“We had big demonstrations in the past, but it had no influence on the government,” Haroon said, referring to the massive asylum seeker protests in 2014. “Now we’re working with the Israelis who are willing to stand up and say no,” he added. “Our hope rests on the Israelis.” Protests were planned in front of the houses of members of parliament, including Interior Ministor Aryeh Deri, Economy Minister Moshe Kahlon, and Prime Minister Netanyahu, he said.

Teklit Michael, an Eritrean asylum seeker and community activist, told +972 that the focus was not just on public campaigns. “An immediate priority is to strengthen the community and prevent them panicking,” he said. As for next steps, “to have faith, first of all.”