Eight hundred words and three photos from one place. This time, the city from which the muezzins sing over the rooftops of the settlements of Kochav Yair and Nir David.

Here is the closest thing that I will have to a Passover vacation: a hop for one morning to a city that is not especially attractive, though pleasant, smiley and delicious. The separation wall, hated by me as it is, split me from my obligations. So I submitted to sweet tea and pastries (sinning with hametz), to the atmosphere in the street, and to the interaction with this close, yet far away place.

Actually, it’s inaccurate to say that Qalqilya is unattractive. It may not feature many fine buildings but it does have, for instance, wonderful greenery: both banana trees and large patches of grass – two things one won’t find in the better known, mountainous Palestinian urban sprawl. It’s fascinating to peek into the small orchards in each home’s courtyard. 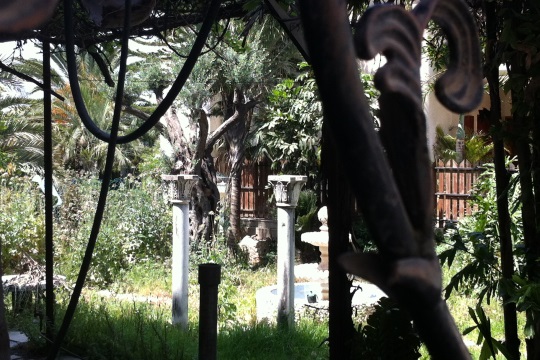 A courtyard in Qalqilya (Photo by Yuval Ben-Ami)

The city boasts an elegant topography: it possesses patience atop a moderate hillside, and its slope fans the densely populated urban cluster. The streets intertwine interestingly, the market is cute, and the similarity of several of the neighborhoods to parts of Jaffa and south Tel Aviv makes one wonder. “Yesha” [the Hebrew acronym for the biblical names of the occupied territories, Judea, Samaria and Gaza, also meaning “salvation”] – is truly here, for better and for worse.

The depth of the tranquility found in the side streets, contrasted with the commotion found in the minds, also generates a form of beauty. I was reminded of Ocosingo, a sweet and unique city I visited in Mexico. Both cities are graceful – Qalqilya even more so. Like Ocosingo, Qalqilya is poor. It was once slightly less poor. Residents of the Israeli city of Kfar Saba and other towns in the Sharon region, along with settlers from the area, used to come here to do their shopping. The signs in Hebrew remain; the customers have disappeared. The Second Intifada created a total disconnect; the separation laws and the ensuing threatening red signs, stating, “they will kill you here,” completed it.

Qalqilya became a place that one sees but does not experience. A sort of menacing Emerald City. We may forget most Palestinian cities, but not this one and not Tul Karem, both so close by. This is precisely why it is so interesting to take a closer look at the city, even if only briefly, and even if there is fairly little to see as a tourist. I deliberately avoided the one attraction, the zoo, after passing a small poultry market where I saw a tied-up owl. 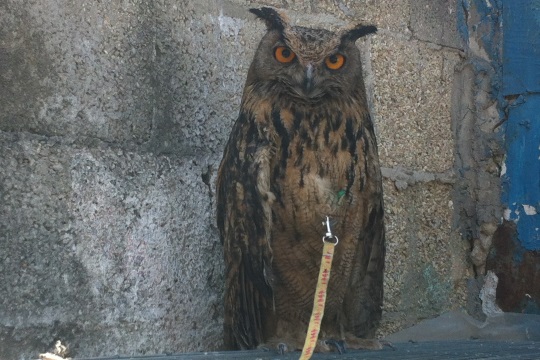 A leashed owl in Qalqilya (Photo by Yuval Ben-Ami)

It saddened me, and I was not sure I could withstand the sorrows of a zoo in a destitute city. I continued to other sites: the new mosque, the golden dome, the park and the adjacent monuments. And of course the giant wall, the leash that restrains the wild bird that is Qalqilya itself. 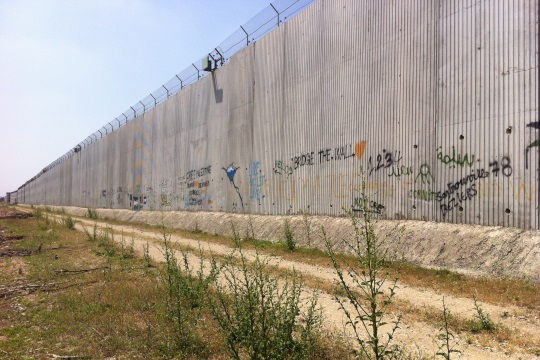 The wall seen from Qalqilya (Photo by Yuval Ben-Ami)

Even those who have seen the wall more than once must see it here, five minutes from Kfar Saba, crawling on its belly. Here, the separation barrier’s walls and fences brush up against the actual Green Line, but it tears away from it and encircles the city almost 360 degrees. It leaves only a narrow corridor out of which juts a highway heading eastward. The highway is dominated by an IDF base. It would be no feat to block the highway and complete the circle.

Qalailya is a seaside city that could not be further from the sea. Likewise, there is no city in the world more disconnected from its suburbs than this. In fact, this city has anti-suburbs. Nearly all of the surrounding land has been seized by communities that do not visit it: West Bank settlements on one side and Jewish towns inside Israel on the other. The wall is just one foreign casing.

On the one hand, the wall is almost unseen. A dense row of trees hides it from travelers on Highway 6 inside Israel. In Qalailya itself it can be seen from almost every window above street-level. When one reaches the last row of houses, the soul is confused because the view is seemingly normal. So many cities, from Avila, Spain to Diyarbakir, Turkey, are surrounded by wide city walls enclosing them. It’s just that the wall is usually homemade and less grey. “History hates walls” is written here on a slab of concrete, and it is not entirely true. History actually loves walls; what it hates are blockades, and eventually, sooner or later, they all become history.

Read this article in the original Hebrew here.