Headlines: It’s déjà-vu all over again

>Top of the news: Israel under attack! All-out war! Egyptians cross the channel! No, wait a second… what? That was the 1973 Yom Kippur war, which is now back in the headlines. A declassified protocol reveals that the Israeli leadership was overwhelmed, and that the security minister at the time, Moshe Dayan, was panicking. Those who have learned the history will not be surprised, but three of Israel’s four dailies find it shocking, even 37 years later. And as to the loss of trust in leadership [Heb]: it has left Israelis ever more passive, rather than vigilant.

>Former head of Israel’s central command, Yair Nave, has been redrafted into the military, to serve as Deputy Chief of Staff. News outlets highlight three facts about him: he’s religious; he executed Ariel Sharon’s disengagement plan in the West Bank; and settlers were very angry at him for the extremely violent eviction of nine illegal homes in the illegal outpost of Amona, built on private Palestinian land. A religious soldier that follows orders… well, I guess that is interesting. 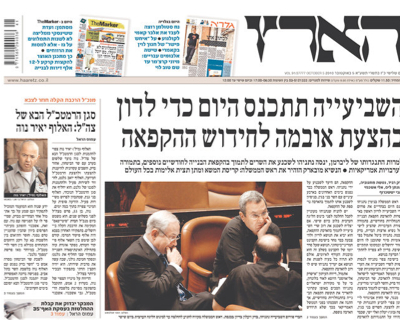 >The chief scientist of the ministry of education, notorious for denying evolution and global warming, was fired, after only ten months on the job.

>Only Ha’aretz puts on its front page a report on a meeting today of seven senior ministers, to discuss another extension of the settlement freeze. Netanyahu is still struggling to get the votes.

The Sidelines: Playing with fire

>Defense Minister Barak calls the arsonists of a mosque in the Palestinian village of Beit Fajer “terrorists”. I’m sure they’ll be captured swiftly and serve long terms in prison. Oh, sorry, my bad, that’s for Palestinian terrorists. This is what happens to Jewish terrorists.

>IDF investigators have stopped looking into [Heb] a Palestinian minor’s complaint, alleging that soldiers physically, sexually and emotionally molested him, because the minor wants a lawyer to accompany him while he gives testimony.

>A Youtube video of a male Israeli soldier dancing near a blindfolded and handcuffed female Palestinian detainee, joins a long line of evidence about such practices in the IDF.

>A special panel has approved the vast majority of requests for compensation, filed by settlers claiming financial damage due to the 10-month freeze which ended last week.

>Settlers stick up for the Oslo agreement, when it’s convenient for them.

> The Palestinians are Israel’s second largest export market, after the US (Ma’ariv, Asakim).

>The UK and Spain will not participate in an OECD meeting in occupied East Jerusalem.

>An expert reminds [Heb] the education ministry that erasing discrimination and injustice from the schoolbooks does not remove it from reality itself.

>A Negev mosque will be demolished because it was built without a permit. The regional police commander advises locals: “If you need a prayer house, it must be built according to the law.” [Yedioth] To paraphrase Bob Dylan: to live inside the law, you must be dishonest.

>A riot occurred in an Israeli village, over the Ministry of Education’s decision to appoint a headmistress instead of the favored local candidate (coincidentally or not, a man: some reports indicate resistance to the headmistress’ “provocative dress”).

>The mayor of the Arab Israeli town of Araba will not allow local volunteers in the national service to work in his schools, because he considers this a gateway to military service (Ma’ariv).

> In the city of Lod, some residents want less Ultra-Orthodox newcomers, and more of a “stronger” (meaning, richer) population (Ma’ariv).

>Childhood prostitution is not about money; it’s the result of sexual molestation (Yedioth, 24 hours).

>A Nobel Prize to the inventor of “test-tube babies” evokes much interest in Israel, where the technology is ubiquitous.

>20,000 teachers will not receive their paychecks because schools failed to meet licensing requirements, mainly regarding safety concerns. The unsafe schools will continue to operate, of course, just without paying the teachers.

>The justice ministry will draft a law restricting the pay of senior executive in the private sector.

>The Supreme Court questions [Heb] the Knesset’s decision to once again do a two-year, instead of a one-year, budget. Petitioners from the opposition party Kadima claim it will reduce parliamentary scrutiny of the government’s finances.

>Intel will invest another 10 billion $ in Israel in return for government subsidies.

The Bottom Lines: The 400 billion $ question

>With all due respect to the Yom Kippur War, I still prefer to answer the 400 billion $ question: who will benefit from the natural gas deposits discovered recently near Israel’s shores? Will it be wealthy businessmen, or Israel’s people? Will Israel continue tapping the US for billions in foreign aid, while handing out twice as much or more in gifts to its wealthiest citizens? According to reports, a government commission will suggest levying windfall taxes, instead of increasing royalties. It would be impossible to assess the fairness of the proposal before details are published. And if it is fair, the gas lobby will surely do all in its power to dilute it.