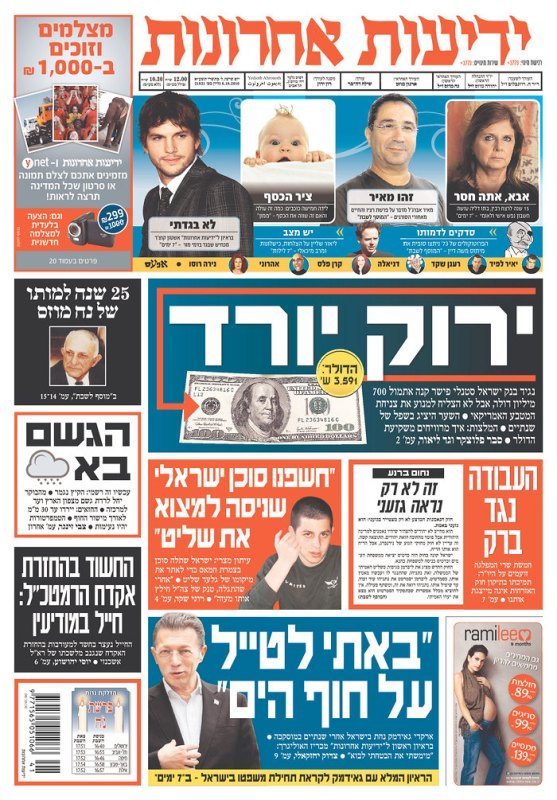 The Headlines: The Dollar declines, Israeli politics sink even lower

> The dollar has sharply declined throughout the world. In Israel, the national bank has been trying to stop this development (which would hurt exports and economic growth) by buying huge amounts of foreign currency. Predictably, it is failing to exclude Israel from the global trend. This is an interesting and important story, but let us put it in perspective: the exchange rate is right now about 5-6% below what it was most of the year, and other currencies (and export markets) are unaffected by this trend.

> Defense Minister Barak (Labor) decides to support a loyalty oath to Israel as “a Jewish and democratic” state for non-Jewish new citizens. Other Labor ministers and MKs strongly oppose the proposal. Yedioth commendably decides to speak the blunt truth: this law does not just look racist, it is racist. This is not quite in the league of Nuremberg laws, but the smell is the same. Finally, with this law, Israel purchases its exit from the family of nations and its entry into the family of Kahana [founder of a Jewish supremacist movement].

> Ha’aretz, shamefully, claims the law is constitutional and non-discriminatory, but criticizes it for being redundant, and damaging to efforts the government is supposedly engaged in, to improve the standing of Israeli Arabs. Ma’ariv agrees, and suggests simply barring Israeli citizenship from Palestinian applicants. Yisrael Hayom publishes two op-eds, one opposed [Heb] and one in favor [Heb] of the new proposal. The latter even suggests the opposition to the law is based on denying the national identity of the Jewish people. Opponets, by the way, include [Heb] ministers Meridor and Begin, and Knesset Chairman Rivlin, all from Likud (the last two are fairly extreme hardliners).

> The fourth day of coverage of the Yom Kippur War protocols is just as enlightening and fresh as the first.

The Sidelines: The tyranny of the majority

> More racist bills [Heb] on the Knesset’s agenda: denying public funding for those who commemorate the Palestinian Nakba, the national disaster that befell them in 1948; arresting those who oppose Israel as a Jewish state; allowing communities to exclude Arab residents; dismantling organizations involved in criminal actions against Israeli abroad; and banning the Muslim head scarf.

> Netanyahu and president Peres honor and praise a right wing leader, who called for the ethnic cleansing of Palestinians, and was assassinated by terrorists.

> An Arab mayor accuses the police of not investigating crimes in the Arab community (Ha’aretz).

> And to prove his point: a judge criticizes [Heb] a police officer for trying to release from jail two Arab men who viciously assaulted their sister and her boyfriend. This officer used to work for the IDF, and was allegedly involved in torturing prisoners.

> Despite promises and allocated funds, police presence in Lod has not been increased [Heb] in 8 years.

> A foreign worker and her 4-year old child may be deported [Heb] on a technicality.

> Israel and the Palestinians may switch back to indirect talks (Ma’ariv).

> 11 people, including children, were injured by Israeli air strikes on Gaza (Ha’aretz).

> In past months, 10 Palestinian boys have been injured [Heb] by IDF fire, while trying to rummage for building material (made scarce by the Israeli siege), in the ruins of settlements near the border between Israel and Gaza.

> The IDF sentenced a soldier that humiliated a Palestinian detainee for 21 days in jail (Ha’aretz).

> A Rabbi calls upon settlers not to enlist because the new deputy chief of staff complied with orders to evacuate settlements.

> An MK suggests [Heb] declaring that the settlers are an “indigenous people”.

> A 17-year old settler was arrested [Heb] for publicly revealing the identity of the head of a division in the Shin Bet (Israel’s internal security service), that investigates Jewish extremists.

> Settlers lodge [Heb] a criminal complaint against Israeli activists who observed settlements with US diplomats.

> US will continue funding a new Israeli system to intercept medium-range missiles.

> A committee suggests increasing water prices. The government will have to decide whether to give offsets for low-income families.

> High-school students are not eligible for aid in purchasing schoolbooks (Ma’ariv, Musafshanat).

> Israel has one of the highest drop-out rates [Heb] in the world for undergraduates.

> Dozens of babies end up [Heb] in the hospital every year due to botched circumcisions. Israel has no law or official regulation regarding the procedure.

The Bottom Lines: Good news, for a change

> Israel’s first “social street” has been inaugurated in Beer Sheva. All the store owners have signed a commitment not to exploit workers and allow access to disabled people (Ha’aretz).

> An attempt for dialogue between refugees and activists in low-income neighborhoods, who oppose the housing of refugees there. No one was convinced, but it is an important start in addressing a painful problem [Heb].