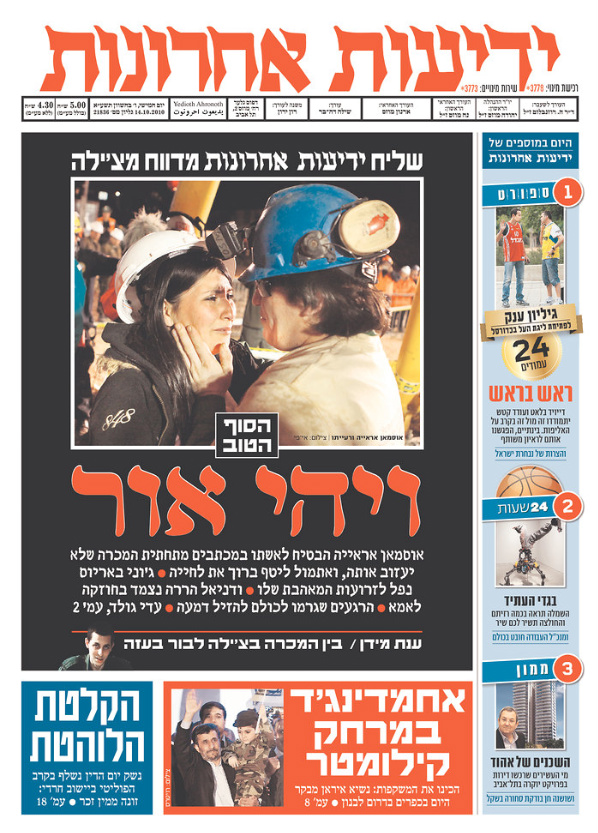 > The headlines today are practically identical to yesterday’s headlines. The rescue of miners in Chile is still the lead story. And here are the results of today’s hyperbole contest: last place – Ha’aretz (“World Celebrates”); third place – Ma’ariv (“Victory of Hope”); runner up – Yisrael Hayom (“Victory of Man”). First prize goes to Yedioth, which compares the event to the creation of the universe – “Let there be Light”. On the margins, Netanyahu (who once claimed his father foresaw 9/11) bragged he predicted the Chile story in a book he wrote 23 years ago.

> Next, just like the day before, is Iranian President Ahmedinijad’s visit to Lebanon. Yedioth and Ma’ariv are practically aroused (“a kilometer away”, “closer than ever”). The former actually advises its readers (with an illustrated map!) how to catch a pip of the superstar. Yisrael Hayom is apocalyptic, screaming that “Ahmedinijad has Conquered Lebanon” (a step on his way to taking over the world [Heb], apparently), comparing [Heb] his visit to the Anschluss, Austria’s annexation to Nazi Germany in 1938, and attacking Obama for American aid to Lebanon’s army. An MK draws the only sensible conclusion. Defense Minister Barak (Labor) joins the party of doomsayers.

> Combine these two stories, and you have a portrait of a giddy, hysterical nation on the brink of a nervous breakdown.

> Netanyahu has decided to establish a committee that would examine ways to reduce centralization in Israel’s private sector, and lessen the disproportionate control and influence exercised by a handful of individuals and families.

> The State Comptroller issued a new report, exposing corruption and mismanagement in Israel’s municipalities. The Comptroller criticized lack of enforcement regarding Palestinian illegal construction in East Jerusalem. The report did recommend developing better plans for Palestinian residents, so that they can build legally (this part was barely covered by the press), but ignored egregious lack of enforcement regarding illegal Jewish construction. Ha’aretz criticized the report for focusing on municipalities, rather than the national authorities, which often have the exclusive authority and resources to tackle problems, even at the municipal lavel.

The Sidelines: Politics as Usual

> Netanyahu renews [Heb] his attempts to split Kadima, the major opposition party, and convince a faction of its members to join his coalition. According to reports, the purpose is to replace Labor if its leaves the coalition, without having to move ahead in negotiations with Palestinians – a precondition for Kadima’s entry as a unified party. Yisrael Beitenu, on its part, has announced it will not leave the coalition if the settlement “freeze” is renewed, while the party’s leader, Foreign Minister Lieberman, tries to tone down his undiplomatic rampage.

> Likud members do not want [Heb] Knesset Chairman Rivlin, of their party, to be their candidate for Israel’s (largely ceremonial) presidency in 2014, because of his criticism of the government.

> Despite the settlement “freeze”, the settler population continues to increase [Heb] in a rapid pace, with many families moving there from within the Green Line.  Settlers rioted [Heb], attacking Israeli soldiers as well as Palestinians, over the eviction of several buildings from an illegal outpost, built on private Palestinian land.

> The Israeli committee investigating the attack on the Gaza flotilla heard testimony from Israeli human rights organizations. The committee members attacked [Heb] the organizations for criticizing the siege on Gaza, and doubted the accuracy of the data they presented.

> Palestinians find it very difficult to get their bail money back from the Israeli Military Courts (Ha’ir).

> A human rights attorney condemns Palestinian stone-throwing in Jerusalem, but also points to the violence directed at Palestinians by settlers and security forces (Yedioth).

> The OECD is under pressure to cancel a tourism conference in Jerusalem, after Israel’s Tourism Minister bragged that it amounts to recognition of the “unified” city as Israel capitol (Ma’ariv).

> A conference on Arab Palestinian culture will be held tomorrow in the Northern town of Shfar’am (Ha’aretz).

> A bill proposed by opposition party Kadima, to constitutionally enshrine Israel’s declaration of independence, is stalled [Heb] by the coalition, arguing that the declaration states that Israel’s border are those recommended by the UN in 1947 – much smaller than Israel’s current internationally recognized territory.

> Senior academics in Tel Aviv University warn of the threat to academic freedom in the campaign against non-Zionist lecturers (Ha’ir).

> The ultra-orthodox are increasingly settling down in Israel’s periphery (Yedioth, Mamon).

> Religious members of the city council in the southern town of Be’er Sheva want to cancel a popular weekly event, because it takes place on a Saturday.

> A Knesset Member announces [Heb] that he will use his immunity and break the law to hide the children of illegal migrants who face deportation; and calls upon his fellow parliamentarians to do the same. The wife of Defense Minister Barak (Labor) will not be indicted for employing an illegal migrant.

> On social and economic issues, there is no opposition in Israel (Ma’ariv, Asakim).

> Poverty in Israel is even higher when measured against an adequate standard of living, rather than exclusively by income (Yedioth, Mamon).

> A Knesset committee gives the go-ahead [Heb] to a bill that would criminally sanction people who fail to update their information in the National Insurance Institute (equivalent to Social Security).

> For the first time, the government agrees to drastically reduce the scope of an annual omnibus bill, attached to the budget, which allows the Finance Ministry to push through dozens of often dramatic economic measures without appropriate debate or scrutiny.

> The Knesset is debating [Heb] a bill, which would increase transparency and control over the committee that decides which medications will be covered under the National Health Insurance law. This seemingly technical matter can mean life or death for many Israelis.

> Health providers’ government funding will now be adjusted to account for the composition of their clients, with more funding for patients in peripheral areas, women and the elderly (TheMarker).

> Crumbling psychiatric wards, where patients are hospitalized in poor conditions, will finally be renovated.

Likud vs Likud: How Revisionist Zionism conquered Israeli politics
Israel’s elections have been billed as a clash of the titans between Netanyahu and Gantz. But no matter who wins, the real victory goes to Vladimir Jabotinsky, the grandfather of the Likud. In what should be regarded as a historic photograph taken last Monday, Prime Minister Benjamin Netanyahu, the head of the Likud party, and Benny…
By Amjad Iraqi September 27, 2019