This is the first of what we hope will become a regular +972 Magazine feature – summary and analysis of how the news is reported in Israel. What stories make the headlines and what stories are neglected? Does the mainstream media support or ‘push’ a discernible narrative – and if so, what is that narrative?

A summary of the names and editorial positions of Israel’s four main dailies:

Yedioth Aharonoth: sometimes called the ‘national newspaper’ or the ‘newspaper of consensus,’ Yedioth is the most widely read Israeli newspaper by far. Approximately 70 percent of Israelis who read a newspaper daily, choose Yedioth.

Maariv: Until recently, Maariv was Israel’s second-most popular daily newspaper. Over the past two years, Maariv has shifted from a center-right publication with a hawkish perspective on security matters, to a definitively right-wing newspaper.

Yisrael Hayom: Often referred to as ‘Bibi’s newspaper,’ (Bibi is the popular nickname for Binyamin Netanyahu), Yisrael Hayom is owned by American casino billionaire Sheldon Adelson. Its position is pro-government, super-hawkish, nationalistic and right-wing. Founded only two years ago and distributed free all over Israel, Yisrael Hayom recently replaced Maariv as the country’s second-most popular newspaper.

Haaretz: Often referred to as Israel’s ‘New York Times’, Haaretz is the country’s only liberal-left daily. It is printed in broadsheet format and written in proper, sober Hebrew. Its English edition is essential reading for foreign journalists and diplomats; while The Marker, Haaretz’s financial newspaper, is essential reading for investors in Israel’s economy. Less than 10 percent of Israelis who read a daily newspaper choose Haaretz; it is, nevertheless, a highly influential paper because its readership includes government officials, diplomats and the foreign press corps. 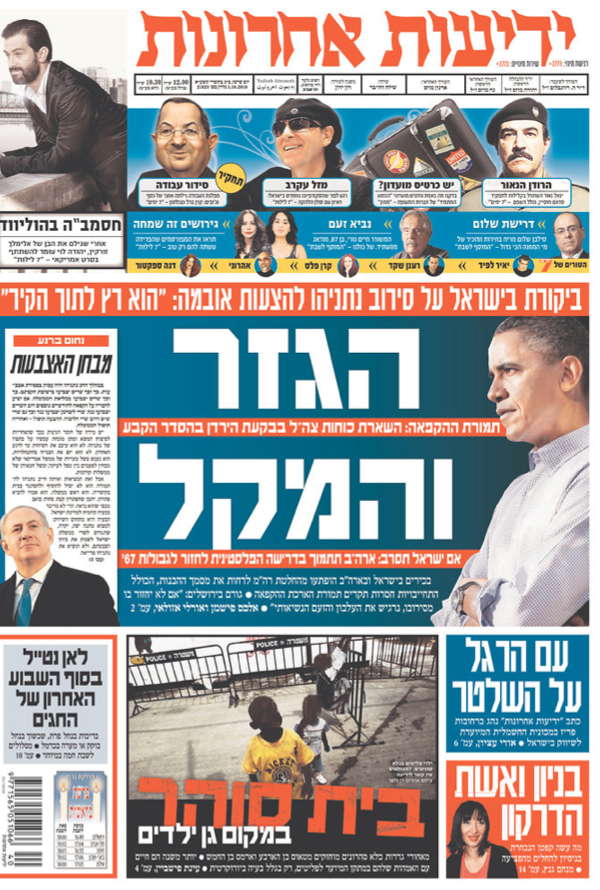 For the weekend of 1-2 October, here is the news in Israel, as reported on the pages of Israel’s four main daily newspapers:

Netanyahu’s choice; reflections on the second Intifada; what’s actually happening on the ground

Headlines: Netanyahu chooses his position as leader of the right over Obama’s ridiculously generous offer
•    The biggest story today is the letter of guarantees Obama offered to Netanyahu, in exchange for sixty more days of settlement “freeze”. The draft letter, turned down by Netanyahu, included various American commitments regarding security, as well as a diplomatic “umbrella” for Israel in the UN Security Council for the next year.

•    All four major dailies seem to agree that Netanyahu should accept the offer. Haaretz stresses the rage in the Obama Administration, whereas Yedioth emphasizes anonymous critics in Israel, accusing Netanyahu of “running into a wall”. Even Ma’ariv commentator Ben Caspit (a supporter of the Netanyahu government), while savagely attacking [Heb] the Obama administration (“How dare they? … Have they no shame?”) clearly implies that the costs of rejectionism are too high. Dan Margalit, a veteran commentator who now writes for Yisrael Hayom, thinks [Heb] it is “a tough dilemma”, but his main con is that Netanyahu would have problems with his coalition.
•    Everyone agrees that internal politics are the motivation behind Netanyahu’s decision. According to Yossi Verter in Haaretz Saturday supplement, if Bibi compromises, Kadima will support him, but he could lose the leadership of the right to Lieberman (whose recent antics in the UN were clearly meant for internal consumption).
•    The possibility of the US offering a parallel guarantee to the Palestinians, to negotiate on the basis of the 1967 borders, is highlighted by Yedioth as a penalty to Netanyahu (“Stick and Carrot”) and by Ma’ariv as US duplicity (“Double Play” [Heb]). Haaretz doesn’t mention it at all, and Yisrael Hayom buries an obscure reference. Instead, it is the only daily that reports [Heb] on a recycled Israeli idea to continue with limited construction during the talks.
•    All outlets covered the story of Rahm Emmanuel’s departure from the White House (front page in Maariv [Heb] and Yisrael Hayom [Heb]), mainly trying to estimate what it says about Obama’s standing in the US and the administration’s attitude towards Israel (with Emmanuel portrayed as advocating a tougher line towards Netanyahu).
•    Haaretz, Ynet (a popular news site owned by Yedioth Aharonoth Group) and Walla! [Heb] report on Norway’s decision to disallow the testing of Israeli submarines in its territorial waters, as part of a military boycott of Israel. The University of Johannesburg decided to continue cooperation with Ben Gurion University if the latter will begin collaborating with Palestinian universities.
•    Bureaucratic problems are keeping four and five year old refugee children in jail for over a year now (according to Yediot’s front page story), while a Chinese laborer languishes in jail for eight months, waiting for an interpreter. On the other hand, a refugee got permanent residency in Israel, as well as a profile in Yediot’s Saturday supplement, and the country hasn’t collapsed. I hope our Minister of the Interior is paying attention.
•    A rare piece of good news regarding Israeli education: the government admits, for the first time, that tests for gifted children are culturally biased, and has begun giving “dynamic evaluation” tests to Israeli Ethiopian children. I strongly endorse Rabbi Rafi Feuerstein’s call to extend this practice beyond Ethiopians and beyond gifted children.

Sidelines: We won the Second Intifada, left the Arabs behind.

•    Ben Caspit, in Maariv Saturday supplement, reminds us that Ariel Sharon intentionally triggered the second intifada. Haaretz and Yedioth ask: did Israel win the conflict? Former Chief of Staff tells Ynet: yep, just too bad we left a Druze soldier to bleed to death. Even when fighting for Israel against their brothers, Israeli Palestinians are ill-treated and forsaken.
•    While Medhet Youssef was left behind, 13 Israeli Palestinian were killed by Israeli police in October 2000. Maariv and Yisrael Hayom are the only newspapers that publish (tiny) items in their news section on events memorializing a decade since those killings. And all they care about is the possibility that Arabs will riot. Ha’aretz covers the events more broadly in its Saturday supplement. The websites excel, with good coverage by Ynet and Walla! [Heb].
•    In an op-ed [Heb], former Meretz MK Zehava Galon’s asks: have the lessons of October 2000 been learned? Israeli Minority Affairs minister attempts to provide an answer regarding the economic development of Israeli Arabs.
•    And for the Israeli public, the biggest question about Israeli Arabs sadly remains: are they a demographic threat? An accountant claims [Heb] Palestinians have invented more than a million of their peers, and argues that the demographic balance tilts towards Jews. On a saner note, former Israeli foreign ministry officials suggest that Israel accept a return of Palestinian refugees from 1948, but not their descendents (no link).
•    A Palestinian engineer helps Palestinian coal industry to reduce air pollution that affects the settlements.
•    A district court will review a petition to prevent the expulsion from Israel of Nobel Peace Prize laureate, Mayrid McGuire. [Update: the petition was denied, but McGuire can appeal to the Supreme Court.]
•    Dubai arrested another suspect in the assassination of a Hamas terrorist in its territory, and claims the Mossad is trying to intimidate its investigators.
•    A prominent Rabbi, accused of sexually harassing his students, returns [Heb] to a full teaching schedule. Yediot’s “7 days” supplement reports about the silencing of another sexual harassment case by a Rabbi.

•    As always, what is most important is not reported. Israeli media remains more interested in what Washington thinks about the settlement “freeze” than in what’s actually happening in the West Bank and East Jerusalem. The slight exception is Nahum Barnea from Yediot, stating (no numbers or sources) that construction has been renewed in the small settlements, East of the separation wall, but not in the settlement blocks adjacent to Israel.  He claims that the Ultra-Orthodox community is pressuring to build in the blocks, because of its housing shortage.
•    ‘Physician for Human Rights – Israel’ has received the alternative Nobel Prize. Mum’s the word, though, in Israeli media.