This movement has triggered in my soul something bigger than Sarura, more sacred than my political rights as a Palestinian, and more profound than reaching a political settlement to the Palestinian-Israeli conflict. 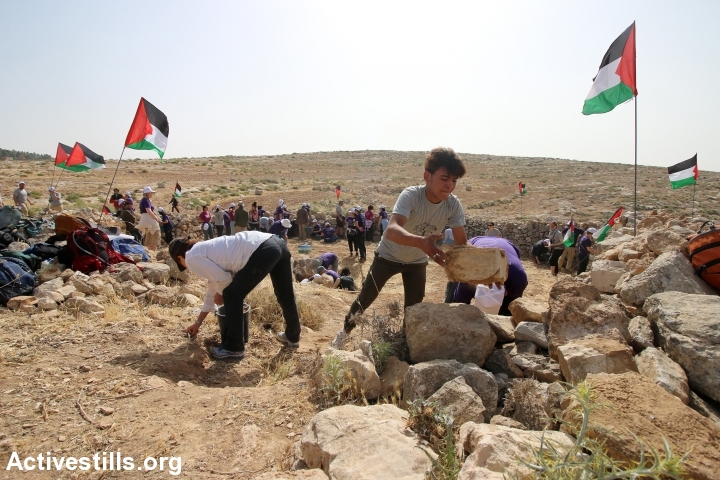 For over a month now, I have been involved with a group of Palestinians, Israelis, and internationals in a new and emerging protest and protect movement called “Sumud: Freedom Camp.” One of our key aims is to build a nonviolent movement that focuses on joint action toward resisting the Israeli military occupation of the Palestinian people.

The first action of our protest movement has been in a small hamlet called Sarura, made up of caves dug in the dry, stony and beautiful South Hebron Hills. The Palestinian farming and shepherding community of these hills was forcefully evicted by the Israeli army 20 years ago and the area it lived in was declared as a closed military firing zone. Jewish settlers nearby played a major role in the families being evicted by violently abusing the residents, destroying their farms, and killing their livestock.

This summer, empowered and inspired, the residents decided to return. Through direct nonviolent action, solidarity, and steadfastness (sumud in Arabic), a coalition of several organizations was able to make that happen. Despite three violent Israeli army attacks, continued settler provocation, and even some Palestinians groups questioning our intention (claiming it was normalization), we managed to renovate two caves and two streets leading to Sarura and the families are preparing to take charge of their lives again. Such an action is noble and unprecedented when it comes to nonviolent actions protesting the occupation, and as such, it has gained international recognition.

I joined and continue to be part of this movement because it has also triggered in my soul something bigger than Sarura, more sacred than my political rights as a Palestinian, and more profound than reaching a political settlement to the Palestinian-Israeli conflict. It has connected me to a new and emerging global movement that in its newness is also deeply rooted in our deepest understanding of our human history and our humanity. 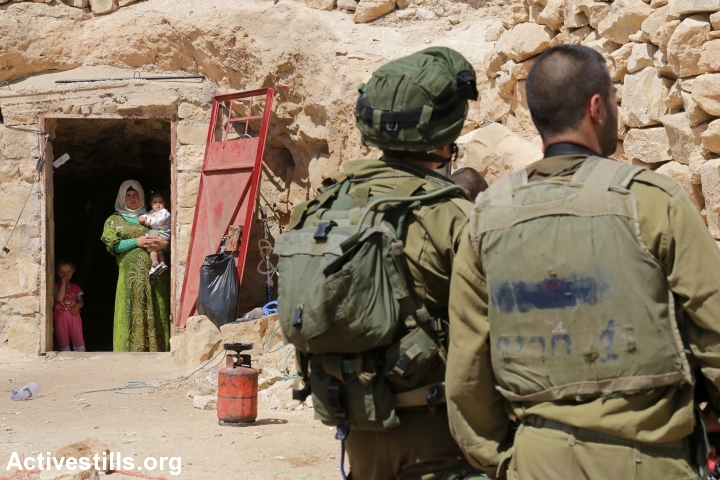 Israeli soldiers stand in front a cave in Sarura, where a Palestinian family lives, during the second military raid on Sumud Freedom Camp, May 25, 2017. (Ahmad al-Bazz/Activestills.org)

Sumud has connected me to the movement of indigenous nations and marginalized communities who, despite their continued struggle for the recognition of their own political, economic, civil, and human rights, are addressing the bigger and most challenging global crises affecting humanity today. It is a movement that sees and feels the destruction taking place on the planet in ways most of us are blind to. It recognizes that greed, fear, and the need to possess more than others have become global epidemics. It recognizes that the answer is not through signing “treaties” and passing resolutions, but the transformation of belief systems that we carry within us where we see that our faith, our ideology, our political identity, our way of life, our color, our race, our status, our sex, is better than the other.

The Sumud Freedom Camp has connected me to a movement that sees every single human being and creature on this planet as precious, suffering, and worthy of a good life. It is a movement that recognizes that while we need to protest against those who are behind the destruction, the aim is not to destroy them but rather create a space for true reconciliation. It is a movement that is an invitation to work together to protect the precious resources that allow us to live on earth.

I have been reaffirmed in the past few weeks that our steadfastness, as well as safeguarding historic ways and indigenous rights, unpacks the deep rooted means and tools to heal our humanity and our planet. Within these sacred traditions, we find the power of nonviolence as a means of protesting, protecting, healing, and transforming. It is through the power of nonviolence and the transcending of separation, we build the community that honors the land, the water, all creatures, and our humanity. When we begin to recognize these sacred aspects of nonviolence as our framework for life, a chance for real peace, justice, and rights for all peoples, in this land and the world, can be manifested.

Sumud is a seed planted in the Holy Land. Slowly its roots are growing and connecting with the roots of all those around the world who believe in a healed humanity and a healed earth.

Sami Awad founded Holy Land Trust 1998 in Bethlehem as a means to empower local communities in working for peace and justice. Holy Land Trust was a founding coalition member of the Sumud: Freedom Camp. Awad holds a Masters Degree in International Relations from the American University in Washington D.C. and an undergraduate degree in Political Science from the University of Kansas.