Israel’s policy in East Jerusalem continues to be a double game: It does not provide Palestinian residents with services it is obligated under its own law to provide, but will not allow anyone else to fill that void either. With the Palestinian population at 38 percent and growing, Israel is just putting off the inevitable menacing choice between formal apartheid, or becoming a minority in its own “undivided capital.” 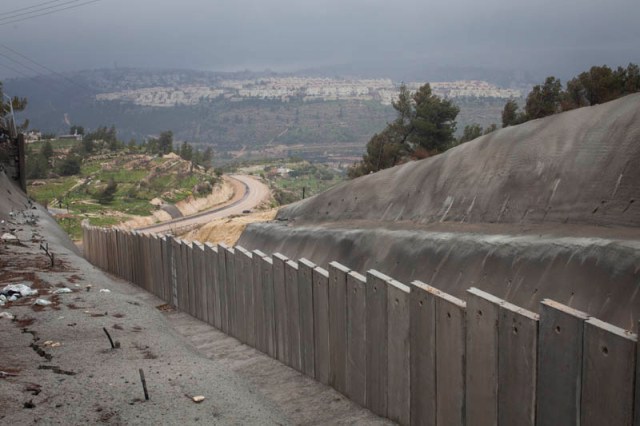 The Walajah wall and a view onto Jerusalem (Oren Ziv / Activestills)

The Israeli government, which officially maintains that Jerusalem is a united city (not only united but eternally so), continues to perpetuate a discriminatory policy against the city’s Palestinian residents, with the explicit goal of marginalizing their place in the city: an overall neglect of their infrastructure including roads, sewage, water and electricity; withholding building permits while demolishing houses built without permit; revoking residency status; substantial poverty and inaccessibility to education.

Nevertheless, Palestinians make up 38 percent of Jerusalem’s residents today, and that percentage is only rising. For those warning of a “demographic threat” this is an alarming detail, not because growth in the Palestinian population threatens resources eligible to Jerusalem’s Jewish residents, but because it exposes a policy of discrimination and apartheid. In action as well as in rhetoric, Israel is preventing any future possibility of division in Jerusalem, by discriminating against Palestinians on the one hand and by extensively building and strongly supporting extremist settlements in Palestinian neighborhoods, on the other. 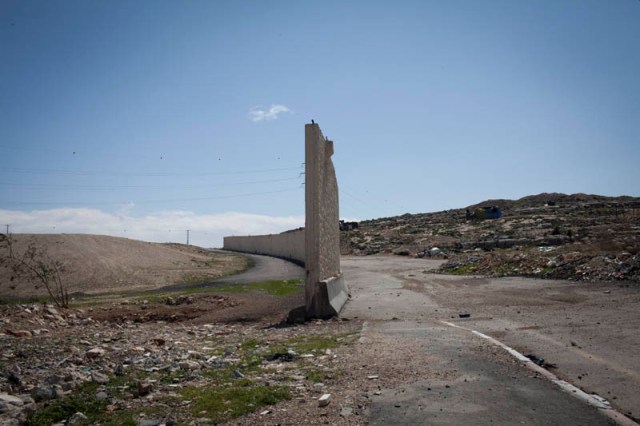 A gap in the wall near Jerusalem. (Oren Ziv / Activestills)

Construction of the separation wall around Jerusalem is another instrument with which Israel perpetuates the current status quo. Much of the wall divides Palestinians villages and neighborhoods, and not Jews and Palestinians. It thus jeopardizes Jerusalem’s ability to be a central city for Palestinians and impedes Palestinian territorial continuity between the West Bank and East Jerusalem. The wall’s role in Israel’s discriminatory planning policy can be acutely observed in the enclaves (Walajeh in the south, the Shua’afat Refugee Camp in the east, and Kafr Akeb and part of the Qalandiya Refugee Camp in the north), which leave Palestinian Jerusalemites who are under municipal jurisdiction on the other side of the wall.

When construction of the wall began about eight years ago, the enclave situated north of the Atarot industrial area and airfield (near Ramallah) and south of settlements like Kochav Yaakov and Psagot consisted of around 25,000 Palestinian residents. The creation of the enclaves now separates over 50,000 Palestinians from their city and daily routine. In order to get to their workplaces, to hospitals, schools and even to visit their neighbors, they now have to cross an army barrier. These residents continue to pay municipal taxes, otherwise they might lose their residency status and thus their freedom of movement and the few social rights they still have. But apart from taking their money Israel does not see itself as obligated to provide these residents with any services. 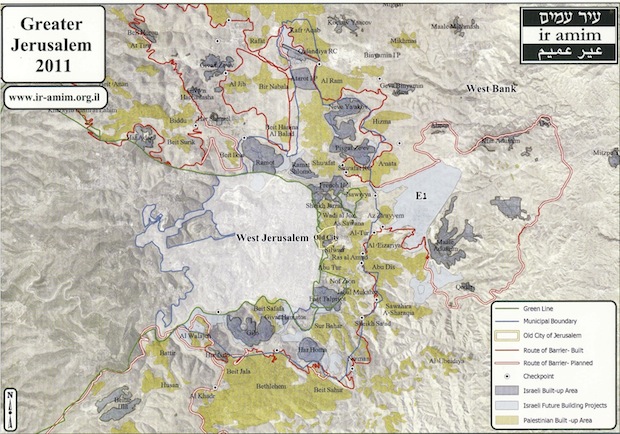 One of the only services Israel still performs in these areas is trash collection, but only through a sub-contractor who does not reach many areas, and even in those he does, residents often complain of inconsistent collection. The only existing garbage bins are the large green containers; there are no individual city garbage bins and no street cleaning. These canisters are worn out, defective and burnt, and serve as a sort of metaphor of Israel’s treatment of these residents; since Palestinians are second rate, those living in these enclaves are third rate, lower than low.

Israel’s policy is to have its cake and eat it too: It does not provide residents with services it is obligated under law to provide, but will not allow the PA to enter and fill that void either. When one crosses the municipal line into the West Bank where the PA is permitted to be active, the infrastructure improves tremendously – the appearance of the streets, the general cleanliness and the buildings are substantially better. Among the services denied of the enclaves are also emergency services: there is no policing, no fire department and ambulances cannot pass through. For example, recently when a resident called the police to report an ongoing assault, no unit was deployed, and instead he was told to cross the barrier and report the event on the other side.

The physical manifestation of apartheid

The result is actually a sort of ex-territory, an island whose residents have been abandoned and left to fend for themselves. In light of the lack in planning services and the housing shortage in the territories under Israel’s control, the northern Jerusalem enclave is replete with extensive construction that lacks any planning or supervision. Apartment buildings appear suddenly with no proper water or electricity systems, and with no roads leading to them. This lack of infrastructure damages residents’ quality of life, their health and security – sewage flows in the streets, water supply is scarce and the unsupervised construction results on occasion in buildings collapsing. In fact, some of these services are not provided even to residents of northern Jerusalem, and north of the neighborhood of Beit Hanina, residents depend on Palestinian water supply.

In order to understand increased construction in the enclaves, one must glance westward to two other enclaves (one comprised of Bir- Naballah, El-Jib and Beit Hanina al-Bald, and the other, comprised of Beit Suriq). These were created by the wall, which surrounds them completely and only allows passage through two main roads (known as “life-line” roads), while leaving the northern Israeli settlements (Beit Horon, Giva’at Ze’ev and Givon Hahadasha) an integral part of Jerusalem.

This is the physical manifestation of apartheid – establishing Jewish settlements deep into Palestinian territory that encircle Palestinians while severely damaging their quality of life, in order to continue providing Jews with privileges – all those rights denied of Palestinians in the same area: roads, unrestricted movement, security, social services and territorial contiguity with the city. Several enclaves are suffering from massive emigration, having become ghost cites since their inhabitants – some of them Jerusalemites themselves – left in order to settle in places where they can move more freely, if not into Jerusalem at least into territories controlled by the PA.

In the meantime, various local initiatives are trying to compensate for the Israeli authorities’ absence. For instance, road construction and garbage burning is being done by residents.  In 2005 a road leading into the village of Kafr Akeb was built by USAID and since then the Palestinian Authority has built two more roads there; a road which is partly in Jerusalem’s municipal territory was built by an international aid agency. Likewise, many of the area’s schools were built by UNRWA.

We have recently learned of the intention to turn this intentional neglect into official policy, when the mayor of Jerusalem turned to the IDF’s Civil Administration and asked them to assume responsibility for the two northern enclaves. Additional evidence of this tendency is Israel’s refusal to comply with an ownership claim by Aryeh King (one of the most prominent field operatives of the settlement movement in East Jerusalem) on a piece of land in the Samir Amis neighborhood. Whereas the municipality and the police normally comply with every demand made by settlers in their attempts to create new settlements in East Jerusalem, their refusal to endorse a new settlement in this enclave is evidence of the fact that they are de-facto not considered part of Jerusalem. Additionally, while officially stating that “there is no intention to alter boundaries and sovereignty,” about a year and a half ago Mayor Barkat suggested that the wall’s route be official declared as the city’s municipal boundary, instead of the current one determined directly following the Six-Day War when Israel annexed East Jerusalem.

Why, then, is Israel doing this? The question of motives must be addressed carefully, but two answers appear to be applicable. Firstly, these enclaves are some of the weakest, most densely populated areas in the city. East Jerusalem is severely impoverished – recent data indicates that 78 percentof Palestinians in Jerusalem live under the poverty line. The municipality already discriminates against Palestinian East Jerusalem in budgetary allocations, and by creating and disavowing these enclaves it can easily continue to minimize its investment in these areas. In addition, if these neighborhoods’ statistics were not included in Jerusalem’s status report, they would improve drastically. Hence Education Minister Gideon Sa’ar’s suggestion to ignore “irrelevant groups” from data regarding education, including residents of East Jerusalem.

The second possible explanation stems from the term “demographic equilibrium”, and its less reserved version “demographic threat”, both of which to me mean rage and repulsion. Borrowed from the natural sciences, the terminology suggests a primordial struggle between species fighting for survival. But this is false pretense, because the threat is not on limited resources, but rather on international recognition and the country’s image. The demographic equilibrium is important for Israel to appear as a democratic and egalitarian state. As long as the oppressed sector is a minority, the discrimination can be whitewashed by formal democracy and an explanation can be made that the allocation of resources is indicative of the general population’s wants and needs.

As the oppressed population grows the lie is revealed, and as the “magic” 50 percent line approaches, the supporters of apartheid fear the impending choice between legally approving apartheid and relinquishing any claims of democracy on the one hand, or having to become a minority in their own state on the other. Creating unusual residency status for over 50,000 Palestinians in the enclaves (added to some 14,000 Palestinians whose residency has been revoked, mostly since 1996) can serve to delay the menacing choice by a few years. Additionally, the enclave anomaly also leaves an opening for a future “territorial compromise” which could be presented to the world as a division of the city, while internally we can smile and know that we really fooled everyone.

Zvi Benninga is an Israeli active with the Solidarity Movement. This article was originally published in Hebrew on the movement’s website and translated by Yael Kenan.