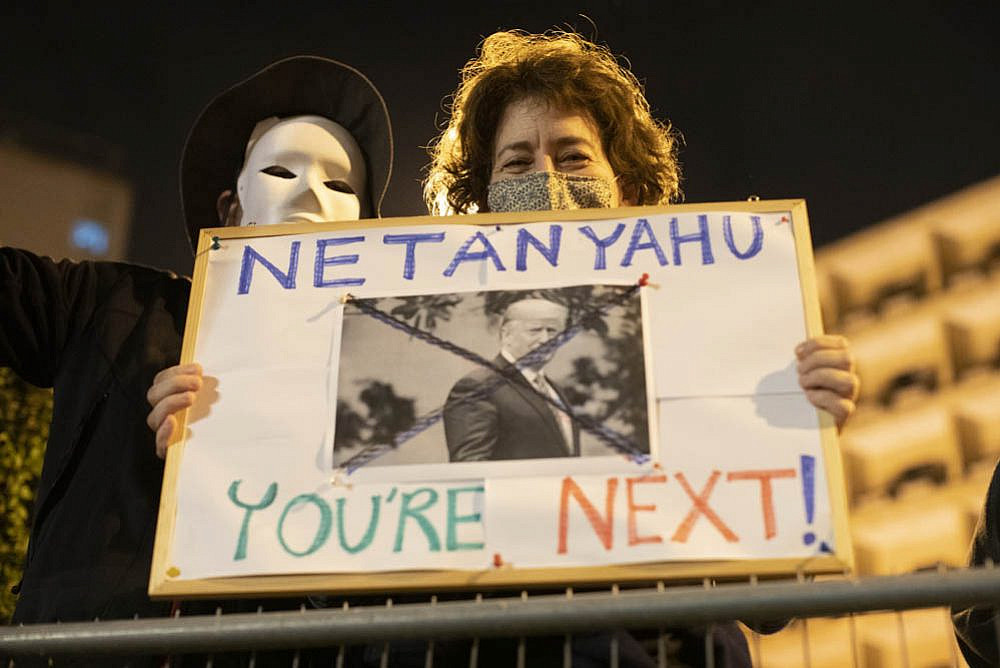 An anti-Netanyahu protester holds up a sign reading 'Netanyahu, you're next' during a demonstration against the prime minister following the election of Joe Biden to the presidency of the U.S., Jerusalem, November 7, 2020. (Oren Ziv)

The news of Joe Biden’s victory in the U.S. presidential elections was welcomed by Israeli demonstrators on Saturday night during the weekly protests against Prime Minister Benjamin Netanyahu in Jerusalem.

The demonstrators marched to the old U.S. Consulate General building near Independence Park, which served as the previous hub of American diplomatic activity in the city before President Donald Trump moved it to Jerusalem in May 2018. Many of the protesters on Saturday expressed joy and hope that like Trump, Netanyahu would also be voted out soon.

Israelis have been protesting against Netanyahu over his corruption scandals and mismanagement of the COVID-19 crisis in Israel across the country for the past five months. In addition to the usual anti-Netanyahu and pro-democracy slogans, protesters chanted “Today it’s Trump — tomorrow Netanyahu.”

Some of the protesters, who arrived after Biden had been officially declared the winner, prepared handwritten signs welcoming the victory. “Biden won, Bibi is next. Bibi is finished, just like his buddy Trump” said Levi Weiman Kalman, an English-speaker who stood in Paris Square, where demonstrations have been taking place intermittently for the last five months, while carrying an American flag.

Idan, a demonstrator from Ramat Hasharon, held up a sign in English that read: “Trump is gone, Bibi has to go.” Idan described the impact of Trump’s loss on the anti-Netanyahu protesters: “There is a limit to evil. I do not need the U.S. to stop Bibi, but rather that people see that the culture of lies and incitement eventually ends.” 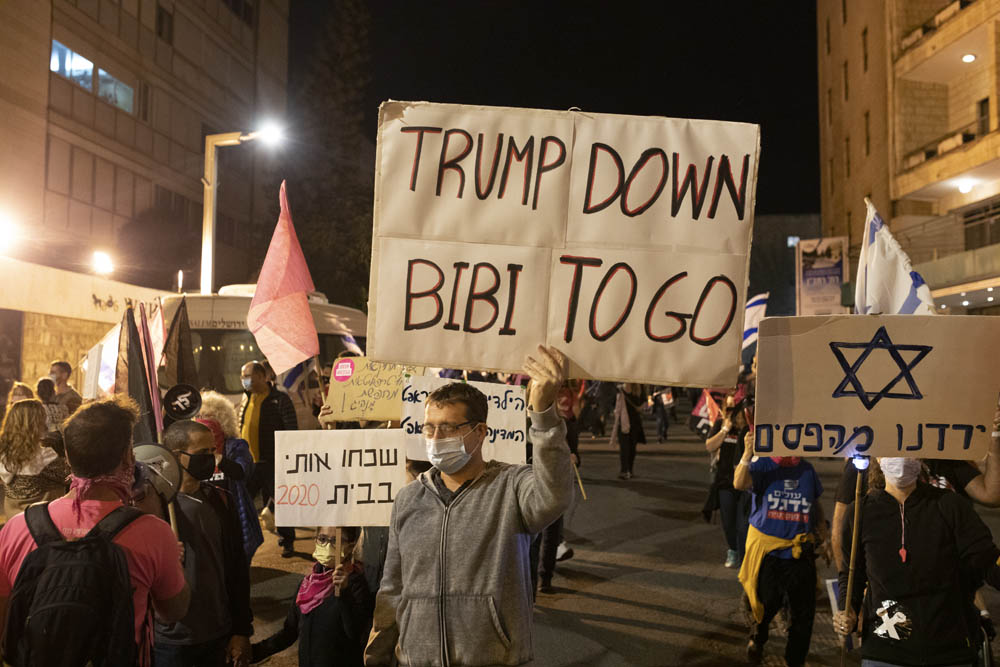 Efrat Safran from the Mothers Against Police Violence, a protest group made up of mothers who work to reduce police brutality and protect protesters, said Trump’s defeat was “a sign that we can get rid of an inciting, corrupt, and racist leader.”

“It is a sign that democracy is strong enough to withstand all the lies,” Safran said. “I salute the U.S. [television] networks that stopped Trump’s live broadcast because of his lies. I look forward to the day this happens with Bibi and the Israeli media.”

Ronit from the town of Mevaseret Zion said she prepared her “Netanyahu, you’re next” sign just before leaving her home for the protest. “It gives a sense that even though it would seem impossible, it is still possible to achieve a goal if enough people work together,” she said.