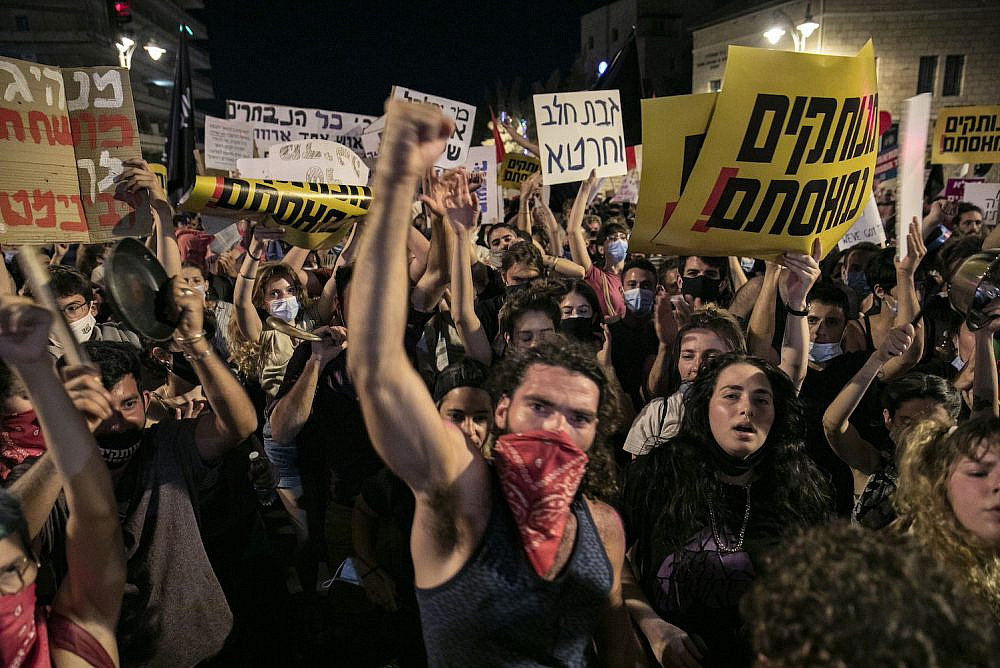 In a briefing following a protest in front of Prime Minister Benjamin Netanyahu’s residence on Jerusalem’s Balfour Street in mid-July, the city’s police chief, Doron Yedid, told reporters that the demonstration was organized “by the left.” He was instantly challenged: “Not just the left! What nonsense!” one protester yelled, her mouth covered with a black mask. “There were [right-wing] Likud supporters here, everyone was here, stop speaking nonsense!”

Given the various slogans and symbols that color the ongoing demonstrations, this confrontation raises important questions. Who are the people who have been taking to the streets over the last two weeks — in numbers unprecedented in recent years — and what do they want?

Opposition to Netanyahu is a central theme of the unrest, with many protesters demanding that he resign, arguing that he is corrupt and is pushing an anti-democratic agenda. Some say Netanyahu has reigned as a “king” for too long, while others claim that the ruling Likud party and its coalition enablers are also tainted by association. A prominent symbol at the protests is the black flag, representing the death of democracy in Israel, which protesters often wave on bridges over highways across the country. Others have been wearing t-shirts and carrying posters that say “Crime Minister,” highlighting the premiere’s alleged corruption.

Some of the demonstrators have rarely protested before, while others have been mobilizing against Netanyahu for years — such as Amir Haskel, a retired air force brigadier general who came into the public eye after police arrested him in June and barred him from entering Jerusalem (a judge later overturned the order). Haskel’s detention prompted the anti-Netanyahu protests to swell.

Haskel is considered a leader of the anti-corruption “Black Flag” protest movement. He is often seen wearing a red “X” on a black background, a “no way” symbol referencing the protesters’ refrain that rejects the idea of having a sitting prime minister on trial for public corruption. Protestors carrying that symbol are often older Jewish Israelis who are proudly Zionist and are primarily concerned about Israel’s security. Several “no way” protesters who accuse Netanyahu of treason have pointed to the submarine scandal — in which the prime minister and several associates are alleged to have acted inappropriately regarding the tendering process with German shipbuilder ThyssenKrupp for financial gain.

“It has never happened in Israel before: that our prime minister, for money, would betray his country,” says Iftach Tami, a former farmer and reserve army lieutenant-colonel. “He’s putting the State of Israel in jeopardy.” Anti-Netanyahu activist Amir Haskel seen during a court hearing in the Jerusalem Magistrate’s Court after being arrested during a protest against the prime minister, June 27, 2020, Jerusalem. (Yonatan Sindel/Flash90)

A second demand rising from the protests is that the government do more to improve the quality of life of the citizens it is mandated to serve. Business owners and people employed in the tourism and service industries are voicing anger at the government’s lack of support during the pandemic, a direct result of the unprecedented strain the coronavirus crisis is placing on the country’s economy. 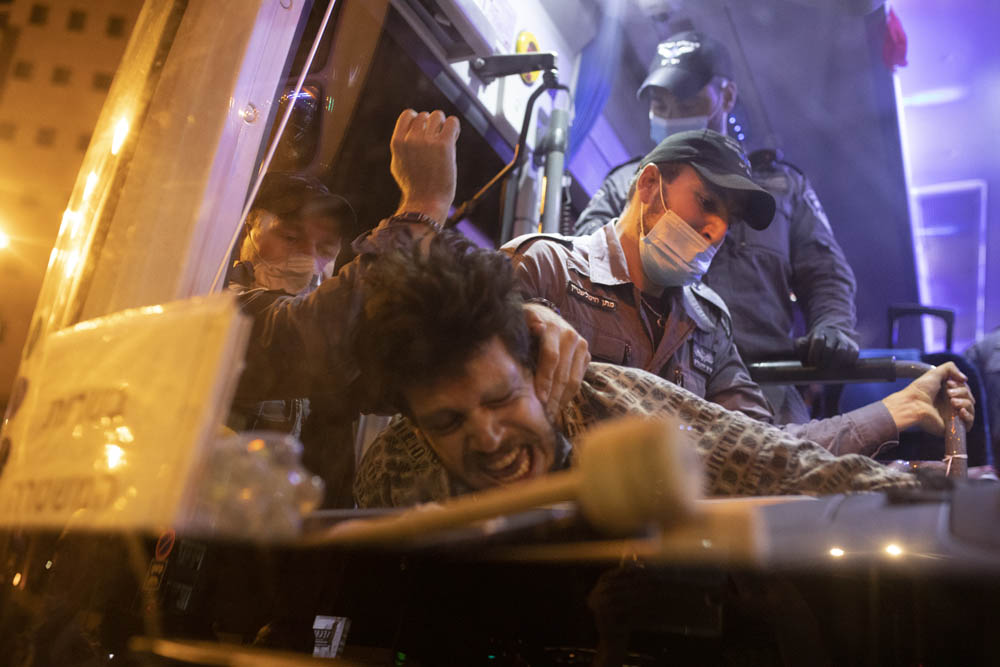 Israeli police arrest a protester in central Jerusalem during clashes that followed a demonstration in front of the Prime Minister’s Residence, calling on Benjamin Netanyahu to step down, July 14, 2020. (Oren Ziv)

Itamar Shay, a bar owner in Jerusalem, arrested while attending one of the demonstrations, said that business owners are finding novel ways to face the government’s perceived incompetence in dealing with the pandemic. Not only are some protesting, but businesspeople are also defying government’s restrictions, he said. Earlier in the week, as the government was considering another lockdown, restaurant owners declared they would refuse to shut down.

Another gripe with the country’s economic system comes from younger protesters who are frustrated by the bleak options on their horizon. These grievances are directly connected to the 2011 social justice protests. They also tie into the anti-corruption movement, with people struggling to provide for their families or to prevent their business from going under during the pandemic, even as the prime minister is focused on granting himself tax rebates. 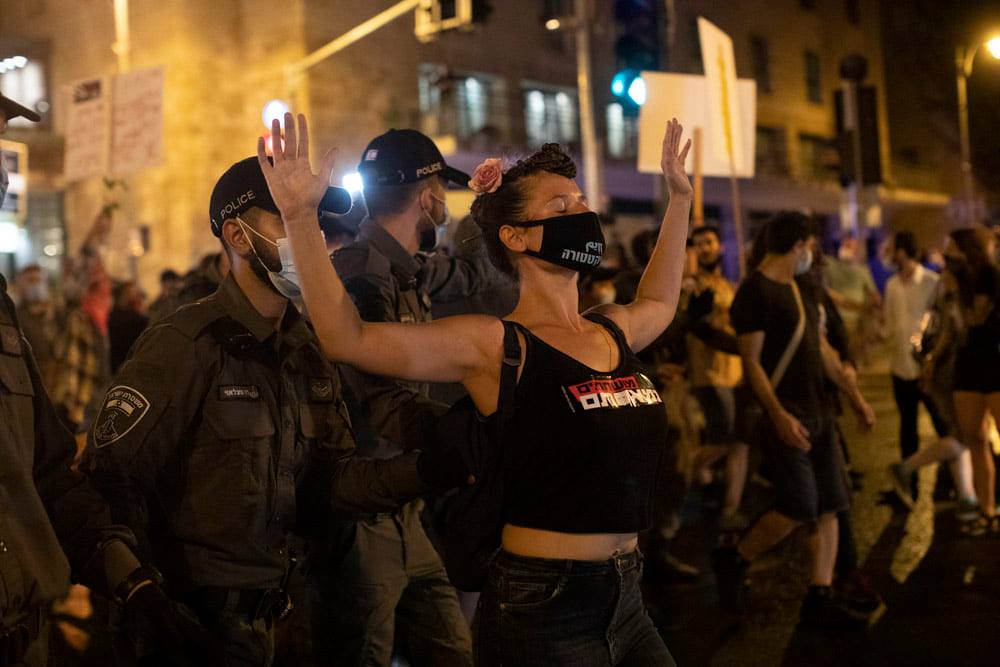 An Israeli demonstrator seen in front of a row of police officers during an anti-Netanyahu protest outside the Prime Minister’s Residence, Jerusalem, July 23, 2020. (Oren Ziv)

Sometimes known as the “homeowners” — a reference to their desire to take back control of the country — these protesters inject a lighter tone into the heated protests. They are often seen trying to hand out flowers to police officers and wearing pink face paint or fancy-dress costumes. A message posted on the group’s Facebook page prior to Saturday evening’s demonstration urged Israelis to protest against “a disconnected and failing government,” and encouraged police officers to refrain from violence and to “protect your citizens.” A spokeswoman for the group declined to be interviewed for this article.

Completing the list of the protestors’ demands is what could be termed the anti-occupation camp: those calling for a change in the way the Israeli government treats the Palestinians it rules over. Solidarity with the Black Lives Matter movement in the United States and revulsion at the recent fatal shooting by Jerusalem police officers of Iyad al-Hallaq, an autistic Palestinian man, have added weight to these protestors’ voices, who seem to be in the minority. Of the 15 people interviewed for this story, two or three seemed to place Israeli oppression of Palestinians as their central reason for protesting, with a similar number mentioning the occupation after first referring to corruption or a desire for a change of government. 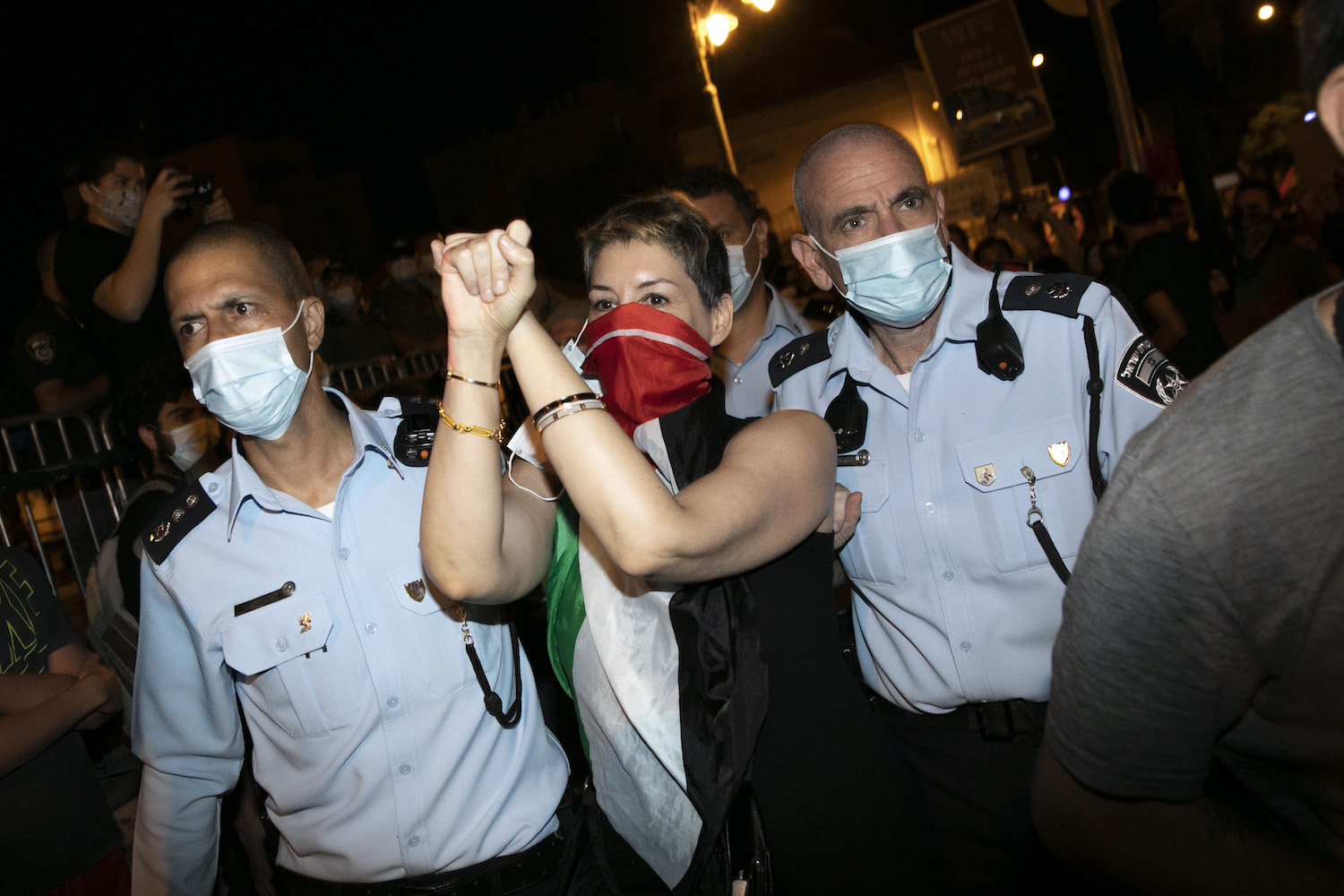 While the movement includes a range of political ideologies and messages, it seems that many protesters have decided to avoid expressing their demands explicitly in political terms. Instead, their preferred strategy is to delay talking about those contradictions until after Netanyahu is ousted. Politics “is what divides us, it’s sensitive,” said Ariel Bernstein, a protestor holding a “Justice for Iyad” sign, who was later arrested.

The disparate groups making up these protests have at times been labelled by the police, counter demonstrators, and politicians as leftists, anarchists, and even traitors. This is something that is troubling many of the demonstrators. Designating people as traitors is a deliberate strategy by politicians to silence dissent, said Itamar Miron, a student studying mathematics who recently participated in one of the protests. “I want to end this being a normal part of our politics, the idea that if you’re not with these particular politicians, then you’re against the whole country,” he said.